Brother and sister beat cancer together

Miles and Samantha Brown were diagnosed with cancer just months apart. Now the siblings want to ring the bell together at home to celebrate the end of treatment.

Jeff and Melissa Brown are watching and laughing as their 7-year-old daughter flips her little body into cartwheels and headstands around their Westfield home on a Friday in the middle of May.

The laughter feels good after nine months of unrelenting worry. It’s a long way from where they were last August, when the couple were knocked flat by the news that their first-born, Samantha, had kidney cancer.

Just about the time they rounded the corner to the finish line of her treatment at Riley Hospital for Children at IU Health came another devastating blow almost too cruel to believe. 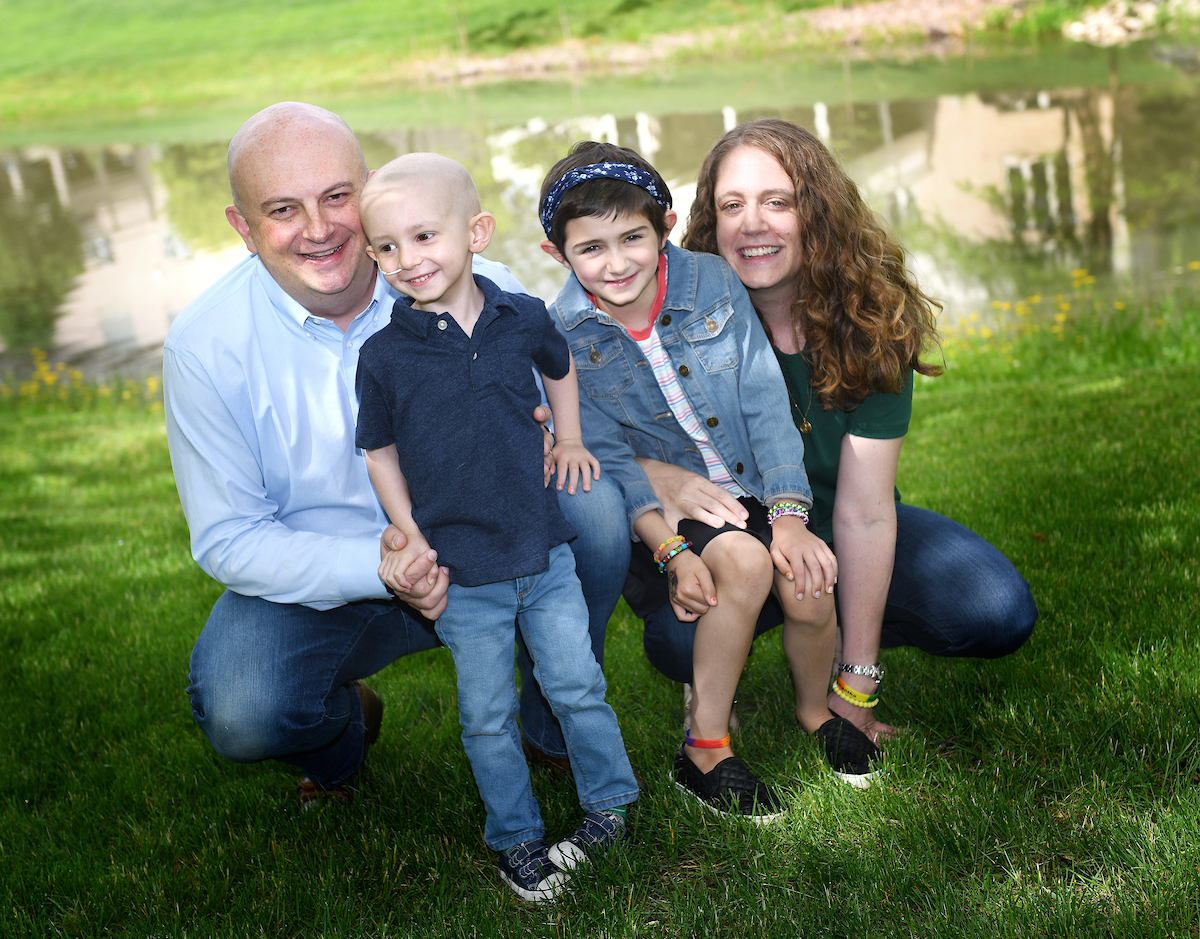 Their 2-year-old son Miles was diagnosed with Burkitt’s leukemia, an aggressive cancer.

How do you even begin to process that kind of news? Two kids with cancer, diagnosed just a few months apart.

“I don’t know that we have processed it,” Melissa said. “You don’t really have a choice but just to keep moving forward.”

And so they have moved forward. Through the blood tests and scans, the chemo, the surgeries. And through the fear.

“THIS IS MY BABY GIRL”

It started that August day in 2019 when Samantha, who had just started first grade, was diagnosed with Wilms’ tumor, a rare form of kidney cancer. She underwent surgery to remove the tumor, then began a five-month course of chemo as an outpatient at Riley.

“We have no history (of cancer) in either of our families, so this caught us off guard,” Melissa said.

“We were scared out of our minds,” Jeff said. “This is my baby girl.”

He recalled how the nurses on the ninth floor at Riley calmed their fears after their daughter was admitted following surgery, telling them what to expect in the days ahead and offering helpful tips as Samantha began chemo.

In December, when she was just a month away from completing chemo and her scans were looking good, the family took a weekend trip to Chicago, where they had previously lived.

It was to be a fun getaway, but while there, Miles, who was born in Chicago, had an appointment with a pediatric urologist who had been watching a condition the little boy was born with called hydronephrosis, a swelling of the kidney due to a build-up of urine.

“The doctor was still following him, so it was nice to go back to the city a couple times a year and they would do tests to see how he was doing,” Jeff said. “It was supposed to be a nice trip, just a good time to enjoy the holiday season.”

It was also the first time they had gone anywhere since Samantha’s diagnosis in August.

It turned out to be a whirlwind. And not in a good way.

Miles had been a little irritable for a few days, and his pediatrician suspected an ear infection, but there were no other signs that anything was amiss.

On Friday, Dec. 13, the couple met with the urologist in Chicago who had been following their son’s case. Jeff will never forget what he saw.

“I was watching the ultrasound and I could see stuff lighting up in there, and I’m asking what is that?”

Miles had multiple tumors on his kidneys and his liver, the doctor told them.

“Just from what I was looking at, it was clearly more severe than Samantha’s and that’s not to understate what she went through,” Jeff explained. “The things that start going through your mind … it looked bad.”

He immediately sent an email to Riley oncologist Dr. Michael Ferguson, who had been overseeing Samantha’s care. The email was marked urgent, but this time it was about Samantha’s little brother.

Dr. Ferguson got on the phone with the couple and the Chicago urologist to discuss Miles’ care and create a game plan for treatment. The family got in their car and drove back to Indianapolis the next day.

Once at Riley, a CT scan confirmed the diagnosis of Burkitt’s, a fast-growing cancer that can be life-threatening but responds well to treatment.

“That was Dec. 14,” Melissa remembered. “We were admitted to Riley and we didn’t leave until …” “fifty-four days later,” her husband finished. 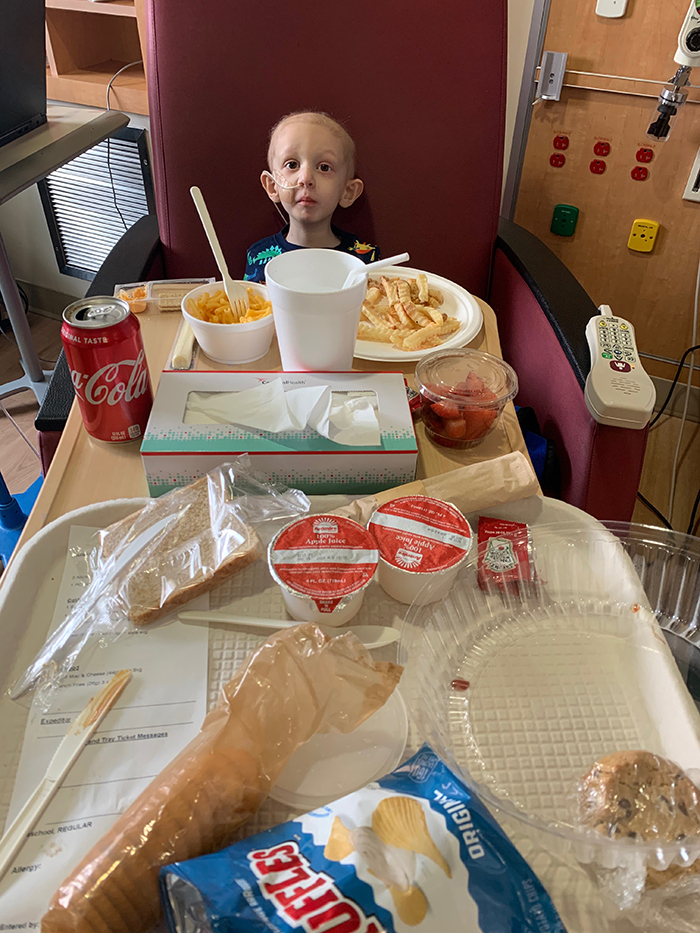 While camped out at the hospital, the couple leaned on family members to care for Samantha once her treatment finished in January. They took turns staying overnight with Miles, who spent much of his time on 5 West but made multiple trips to the PICU. At one point, his kidneys shut down and he had to have dialysis.

“The beginning was just very bad; I don’t know how else to describe it,” Jeff said. “I was actually working during that time. I would stay over at night, then go to work in the morning. It’s hard because you don’t want to leave your kid when there’s so much uncertainty.”

The staff on the oncology floor helped carry them through the worst of it, Melissa and Jeff said.

There were the nurses who became an extension of their family because they cared for their son like he was one of their own.

There was Dr. Ferguson, who told the couple to reach out to him anytime with questions.

There was the facilities team member Jeff would see in the mornings who always had a positive word and a smile for him.

And there were the respiratory therapists who delighted in every milestone Miles achieved, which gave his weary parents hope.

RINGING THE BELL HAS TO WAIT 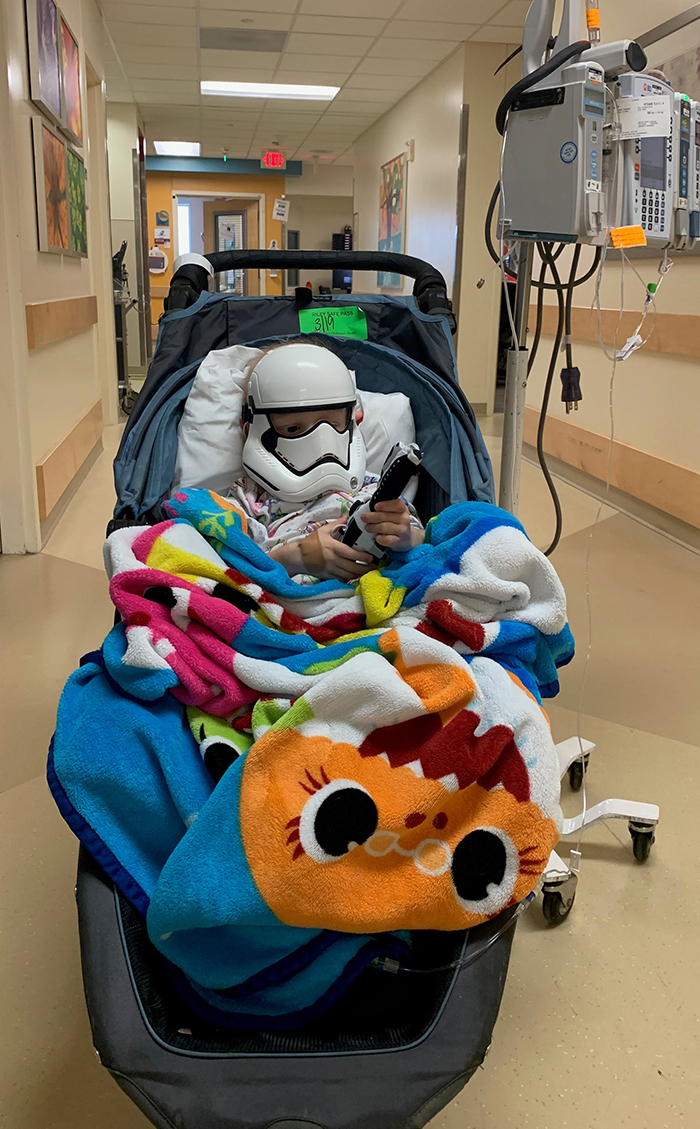 During Miles’ initial eight-week stay, he was in isolation most of the time, so he couldn’t leave his room. But afterward, when he would come in for shorter stays, one of his favorite things to do was ride around the unit in his stroller, wearing his Stormtrooper mask and scaring the nurses with a fake snake or cockroach.

That’s their little guy – full of spirit and mischief. Now 3, Miles is regaining the strength he lost during treatment and recently had his feeding tube and port removed.

Melissa and Jeff had their sights set on the end of April, when both of their children would be free of the cancer that threatened them and they could ring the Riley bell, symbolizing the end of treatment.

Samantha could have had her bell-ringing earlier in the year. But she decided to wait for her little brother so they could ring the bell together.

And then the coronavirus collided with their plans.

Bell-ringings, which typically bring together multiple team members and family members in a small hallway, had to be put on hold.

With both children back home now and cancer-free, the family is looking forward to planning a special bell-ringing ceremony of their own at home in July.

The Browns don’t know why both of their children were afflicted with cancer, but they hope they are through the worst of it.

“I will always be on edge with this,” Jeff said. “Whether it’s a temperature or a bruise or whatever, anytime they’re not feeling well, I’m probably going to communicate with Dr. Ferguson.”