Sepsis took his limbs, but nothing can take away his spirit. Jeremiah Cox, 4, has new wheels to give him the independence he craves.

Jeremiah Cox can’t help himself. He smiles through his dinosaur mask when he sees the little wheelchair that has been made just for him.

It’s all shiny and tiny and waiting just for him in the rehab services-adaptive equipment area at the Riley Outpatient Center. 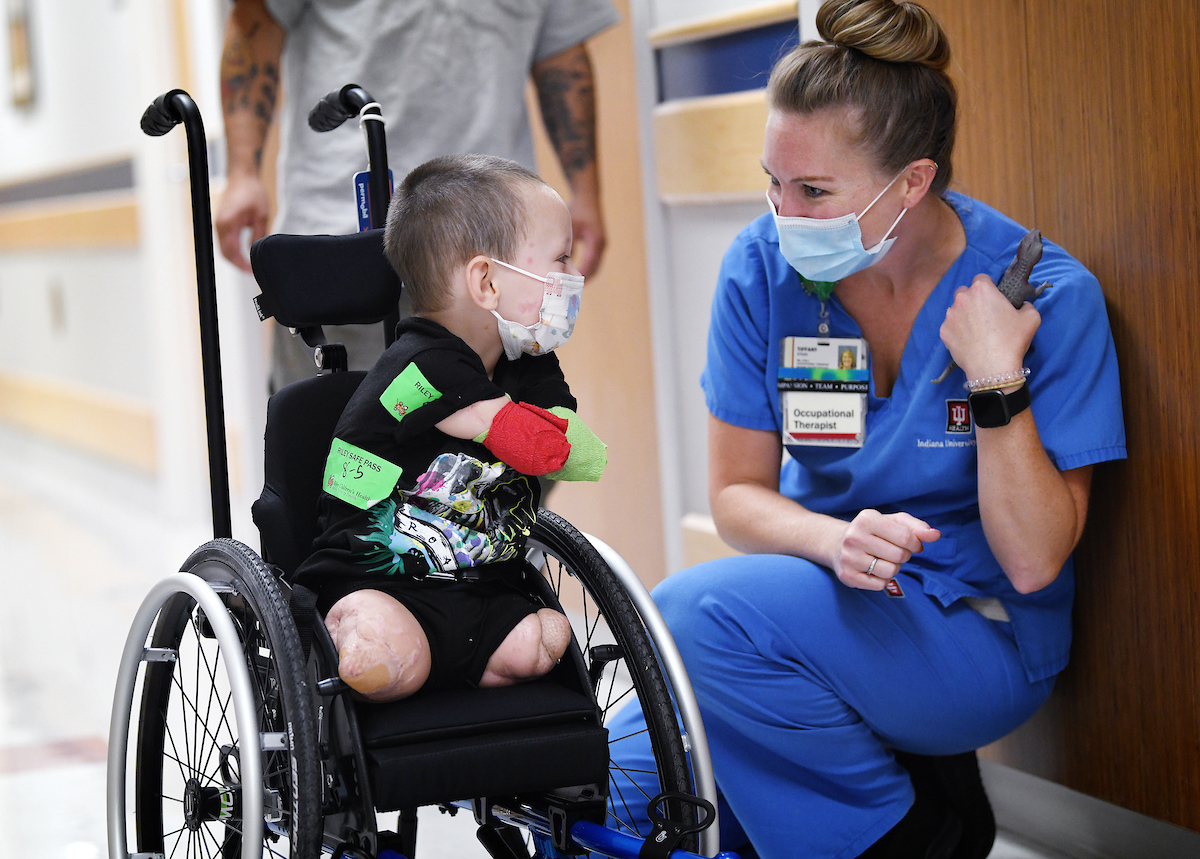 Four-year-old Jeremiah wants to take it for a spin right away, urging occupational therapist Tiffany Stead to release the brake so he can try out his new wheels.

Life for the little boy was forever changed two years ago when he came down with a bacterial infection that escalated into sepsis, a life-threatening condition that strikes more than 75,000 kids each year in the United States. Nearly 7,000 die. Others, like Jeremiah, lose limbs to amputation in a desperate attempt to save their lives.

Doctors at Riley Hospital for Children at IU Health were forced to perform a quadruple amputation on the toddler, who was just 2 at the time. The legs he once used to race around his Westside Indianapolis home with his siblings are gone. The hands and arms he used to feed himself and draw pictures with are gone.

In their place are what are commonly called stumps, or residual limbs. Jeremiah has prosthetic arms and legs, but he is quite adept at scooting around without them to get where he wants to go.

Jeremiah is at Riley with his dad, Nick Thompson, to see how well the custom wheelchair suits him. He’s grown since he was first fitted for the chair.

“He’s gotten so big, I’m making him too fat,” Thompson says as he props his son up next to him on the therapy table. “He’s gonna like this chair.”

The technicians have taken his growth into account. It’s been several months since he first tried out a demo model and they got his measurements. But they soon realize they will have to make adjustments to the seat and the wheels to make it easier for him to propel himself.

Stead suggests it will be easier for Jeremiah to propel the chair without his prosthetic arms, which can’t manipulate the wheels, so she begins to wrap his tiny arm stumps with layers of Coban, a self-adhering bandage to extend his reach and help his grip.

At one point, he scoots his body around to face the wall, refusing to look at anyone. His dad said he gets shy sometimes because he thinks people are staring at him.

“He has his own personality. He’s kind of bossy,” Thompson says. “But everybody loves Jeremiah.” 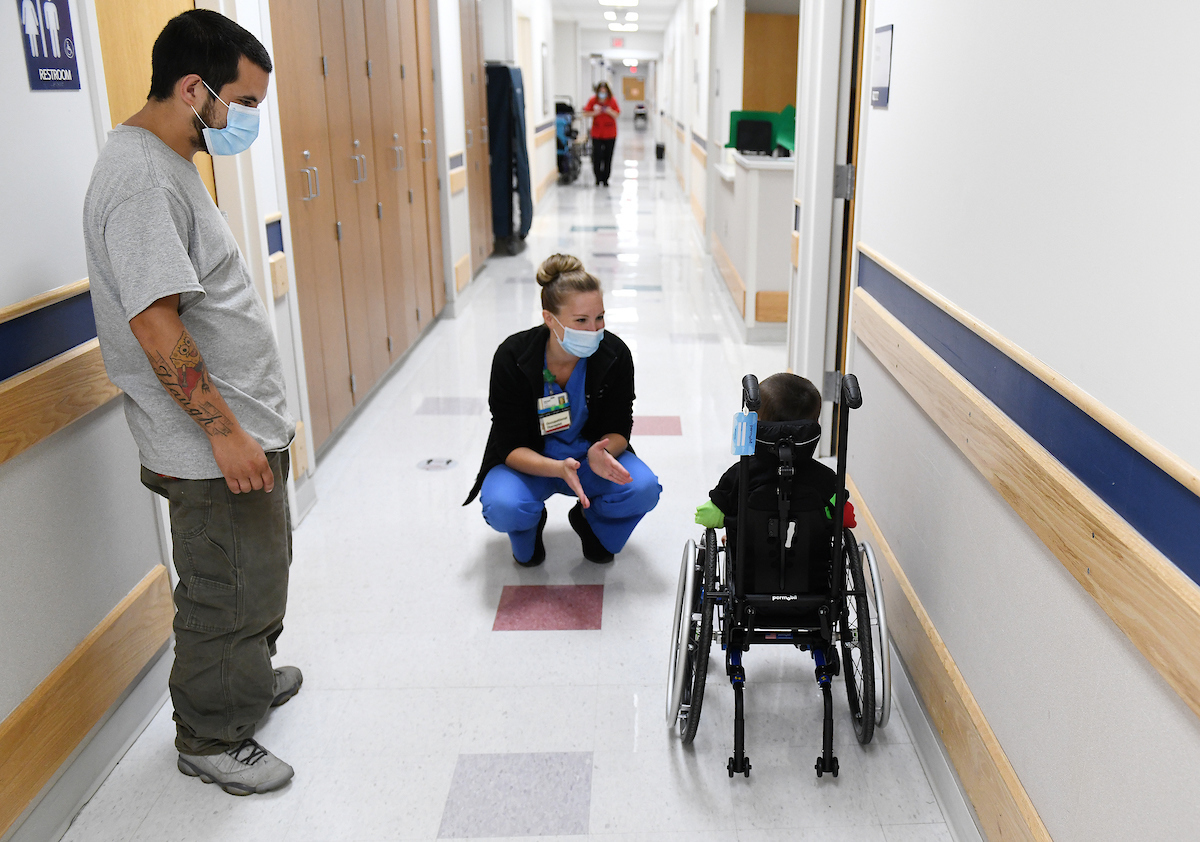 The second oldest of five children, Jeremiah can hold his own with his siblings, his young dad says. Jeremiah’s mom, Ashley Cox, gave birth to his younger sibling while Jeremiah was fighting for his life at Riley.

“I don’t treat him any different from the other kids,” Thompson said. “He has a bike and a skateboard that he rides around. He loves his trampoline, his dogs, and floating on his back in the pool.”

After a couple attempts and a few more adjustments to the chair, Jeremiah is ready to roll – out the door, down the hall and into the waiting area. He laughs when he accidentally runs over Stead’s toes – he’ll have to work on his driving skills – but his new-found freedom seems to suit him.

“Jeremiah, I’m so proud of you,” another therapist says as she spies Jeremiah moving down the hall.

Stead is optimistic that the custom chair will allow Jeremiah to keep up with his family’s busy life and with his friends once he starts school.

“Sometimes kids like Jeremiah end up in a stroller, and other kids see them as babies,” she said. “This chair gives him more age-appropriate interaction with his peers.”

The chair sits low to the ground so Jeremiah can reach the wheels without prosthetics. Eventually, Stead said, he’ll be able to work on climbing in on his own, giving him even more independence.

It has growth capability built into it, so it should last close to five years, Stead said. By then, or even earlier, she thinks he would be a good candidate for a power chair.

“He can do the manual wheelchair that we’re getting him very efficiently,” she said, “but from the standpoint of keeping up with peers, especially as he gets older, he’s going to have better energy conservation in a power chair.”

As she shows pictures of the power wheelchair to Jeremiah’s dad on her laptop, the little boy peers over the top of the screen to see for himself.

“It goes fast,” he says. “But you have to be safe,” Stead tells him. Then he sees something else that intrigues him. “It has a phone!” Not a phone, actually, she says, but a control panel. “That’s to drive the chair.”

Thompson is not convinced that the power chair is a good idea, worried that he might become too dependent on it and not use his prosthetics to walk, but Stead assures him that it’s not meant to replace walking or take away any of his abilities. Rather, it’s just to provide assistance and conserve energy when he’s going longer distances.

Jeremiah doesn’t miss much during the consultation with Stead and representatives of National Seating & Mobility. He wants to help Stead or offer his opinion every step of the way. When they take the chair away for more adjustments, he says, “Are they making it bigger? Are they gonna put new wheels on it?”

The wheels aren’t any different, Stead tells him. “We just moved them to make it easier for you.”

He takes another spin in the chair, while Stead uses a toy dinosaur to encourage him to go a little farther.

As Jeremiah hits the wall a couple of times in the chair, Stead tells Thompson not to worry too much about that. He won’t hurt himself, she says, and he’ll get the hang of turning the chair.

“You’re allowing him to practice and learn.”

And Jeremiah is definitely ready to learn. When dad tries to push him back into the room, the little boy uses his foot to try to apply the brake.

“I didn’t see that coming,” Thompson says with a laugh.

Whatever else life has in store, Jeremiah is ready to roll.