This 5-year-old with scoliosis can’t wait to take a bath and splash in the pool.

Josslyn McClure couldn’t wait to take a bath last week. The 5-year-old had been waiting for a year and a half to soak in the tub with bubbles up to her chin.

She’s been in a body cast to straighten her spine since January 2018. Because the cast couldn’t get wet, baths were out and swimming was prohibited.

But July 16 was a day for celebration. Josslyn had her fourth and final cast removed. At least she hopes it’s her last one. That will be up to her spine and her doctor, orthopedic surgeon Tyler Christman at Riley Hospital for Children. 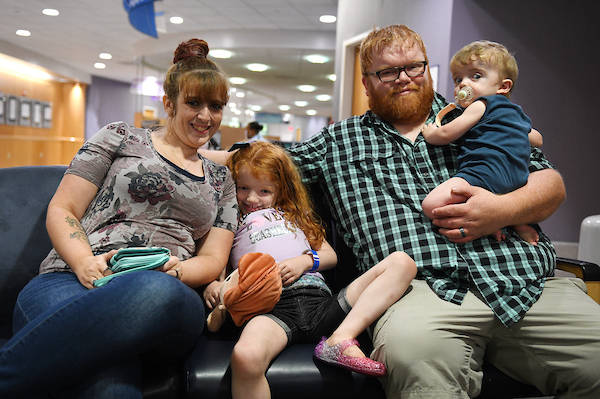 The pint-sized kindergartner from Terre Haute, Indiana, came to Riley last week with her parents, Joe and Casey, and baby brother, Deacon. Two older brothers stayed with their grandparents.

Wearing a purple unicorn shirt, jean shorts and pink and purple jelly shoes, Josslyn was making a fashion statement, and she made sure her mom wore a similar style to match.

Josslyn is a girlie girl, her mom said, but growing up with three brothers has also made her tough. For the past 18 months, the cast she has worn on her torso has provided an extra layer of body armor she sometimes used to her advantage during sibling squabbles.

“She used it as a weapon sometimes,” her dad said with a laugh.

But soon it would come off. And then, he said, she would lose her superpower. 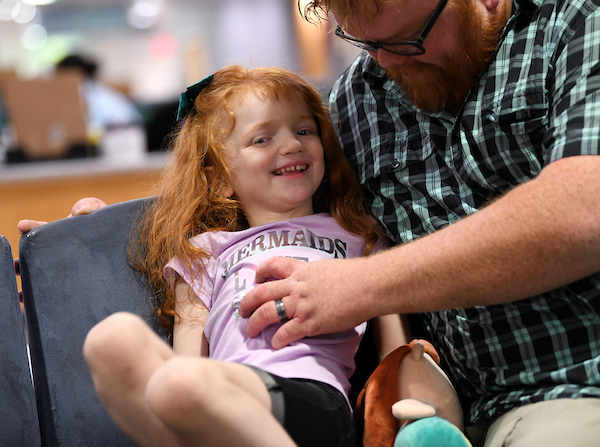 SHE SAT A LITTLE CROOKED

Josslyn was born three weeks early during a December snowstorm in 2013. From early on, she showed an independent streak, Casey McClure said.

But her parents also noticed something else. She sat a little crooked, with her head tilted to one side.

“She had physical therapy, and they were waiting to see if when the head straightened out, the back would straighten as well,” Casey said. “It never did. You could definitely tell her shoulder blades stuck out on that one side.”

Infantile scoliosis presents between birth and 3 years of age. It has been linked to chest deformities, fused ribs and neuromuscular disorders. A pure infantile idiopathic curve also can happen without an underlying cause.

Severe infantile scoliosis can lead to problems with the heart and lungs, Dr. Christman said. As a baby develops, he or she would have a progression of their curve and, in extreme cases, would have problems maintaining heart and lung function.

“Without intervention, they would develop thoracic insufficiencies and have a very short life expectancy,” he said. 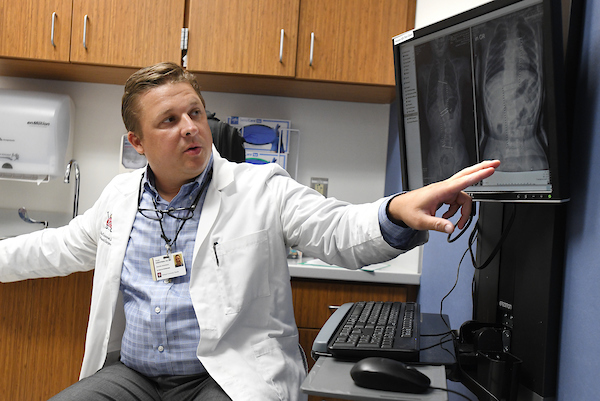 In Josslyn’s case, X-rays revealed a more than 60-degree curve at the top of her spine and a smaller curve toward the bottom.

Casey had read about the rods and pins used to stabilize a spine in some surgeries, an idea that terrified her. So while the thought of her daughter being in a body cast was scary, it sounded better than the alternative, she said.

Dr. Christman says casting is a viable alternative to surgery for young children.

So for the past 18 months, Josslyn has worn a body cast – four in all over time. Under the cast, she wore a fitted T-shirt that could be changed out to protect her skin. 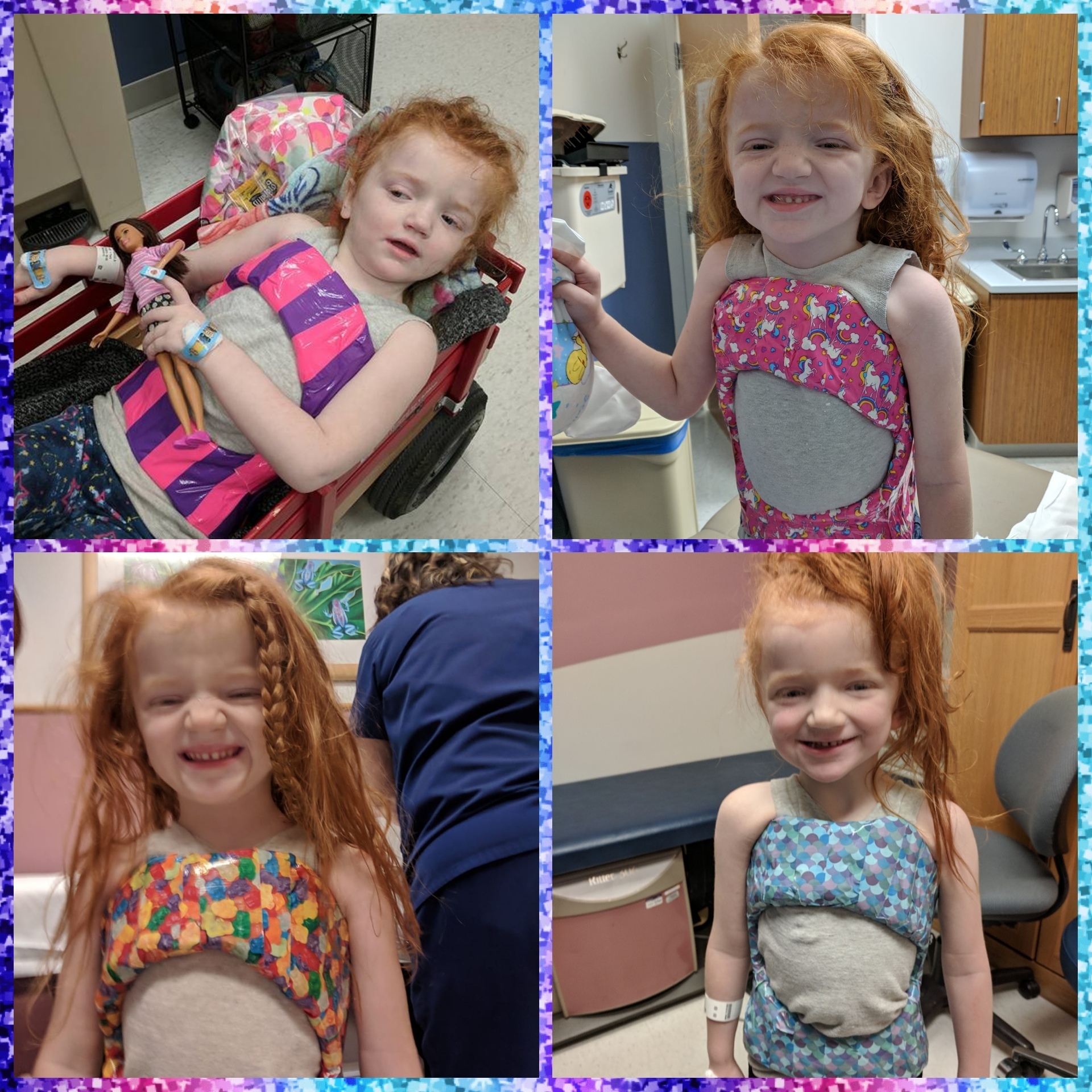 The McClures have had July 16 circled on their calendar for months. This would be the day their little girl would have her cast removed, and they would learn what comes next.

“I’m hoping they’ll say she’s good, but she might need a brace,” Casey said nervously as she waited for Josslyn’s appointment to begin.

Even that would be an improvement. Josslyn is in a summer dance program now, but she was looking forward to dancing without her cast for at least the last week of class. And she really wanted to go swimming with her brothers and cousins.

Regardless of what news the appointment would bring, the family planned to have lunch at a Terre Haute mall – Josslyn’s choice – and let Josslyn swim in a baby pool at her grandma’s house that evening and take a bath in her garden tub.

When her name was called and it was time to have the cast removed by Riley nurse Crystal Stratton, Josslyn held onto a doll and her mom for courage but shrank back from the noise of the drill cutting into the fiberglass cast.

As Stratton reassured her that it wouldn’t hurt but she might feel a tickle, Josslyn couldn’t help but cry as she grasped her mom tighter. In a minute or two, the cast was off and Josslyn was marveling at the sight of her stomach and her belly button again.

“She’s been very concerned about her belly button,” Casey laughed.

As she adapted to her new-found freedom, Josslyn grabbed the plastic bag holding her cast and wiggled her way down the hospital hallway to get a standing X-ray of her spine.

Dr. Christman, who had checked in earlier with the family before the X-ray, now returns with the results.

A lot of the rotation she had before is gone, he said, but her spine still has a small curve to it.

“When we look at the X-ray, we can see it (the spine) rebounded out of the cast more than we wanted, but we’ve made a significant amount of improvement from when we started.”

The biggest curve showed a substantial correction of about 30 degrees, he said, down from about 68 to 38 degrees. The lower curve also corrected from about 42 degrees to 31.

It’s good but not good enough. Ideally, he wants the curve to be no more than 15 degrees. He recommends giving her a “cast holiday” and putting her in a brace for the next four to six months. The removable brace would need to be worn 23 hours a day, but it could come off for special events like a day at the pool or the beach. 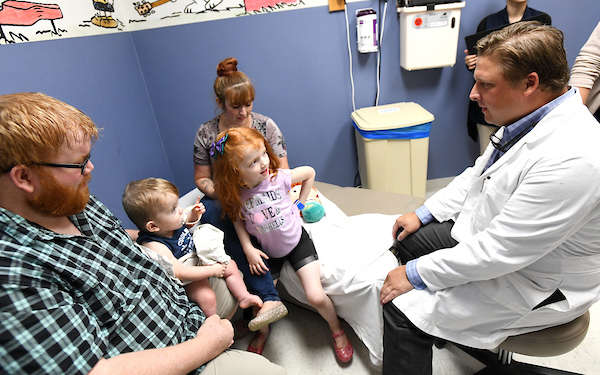 At Josslyn’s next appointment at the end of the year, the hope is that her curve looks the same or better. In that case, she would continue wearing the brace.

If the curve goes the other way, the family will be faced with the possibility that Josslyn will be fitted for another cast or perhaps need surgery to place a growing rod in her spine.

As Dr. Christman explained the technology used in MAGEC growing rods – which are implanted surgically but can be adjusted via a magnetic motor without having to return to the operating room – Casey kept up a brave face, but admitted later it was a lot to digest.

“We were hoping to avoid surgery. Hopefully, she keeps growing straight.”

Josslyn is oblivious to her mom’s worries in this moment, however, as she skips out after the appointment. She’s looking forward to lunch, a trip to the Disney Store and a long bubble bath. And she has a new swim suit covered with unicorns that she can’t wait to wear.

Before the family left Riley, Josslyn was fitted for her brace. She picked out a purple one with butterflies and is waiting for it to be made.

She went back to dance class the next day – the first without her cast.

“She did so well I started to cry,” her mom said. “She’s a good sport. I’m just glad I don’t have to wash her hair in the kitchen sink anymore.” 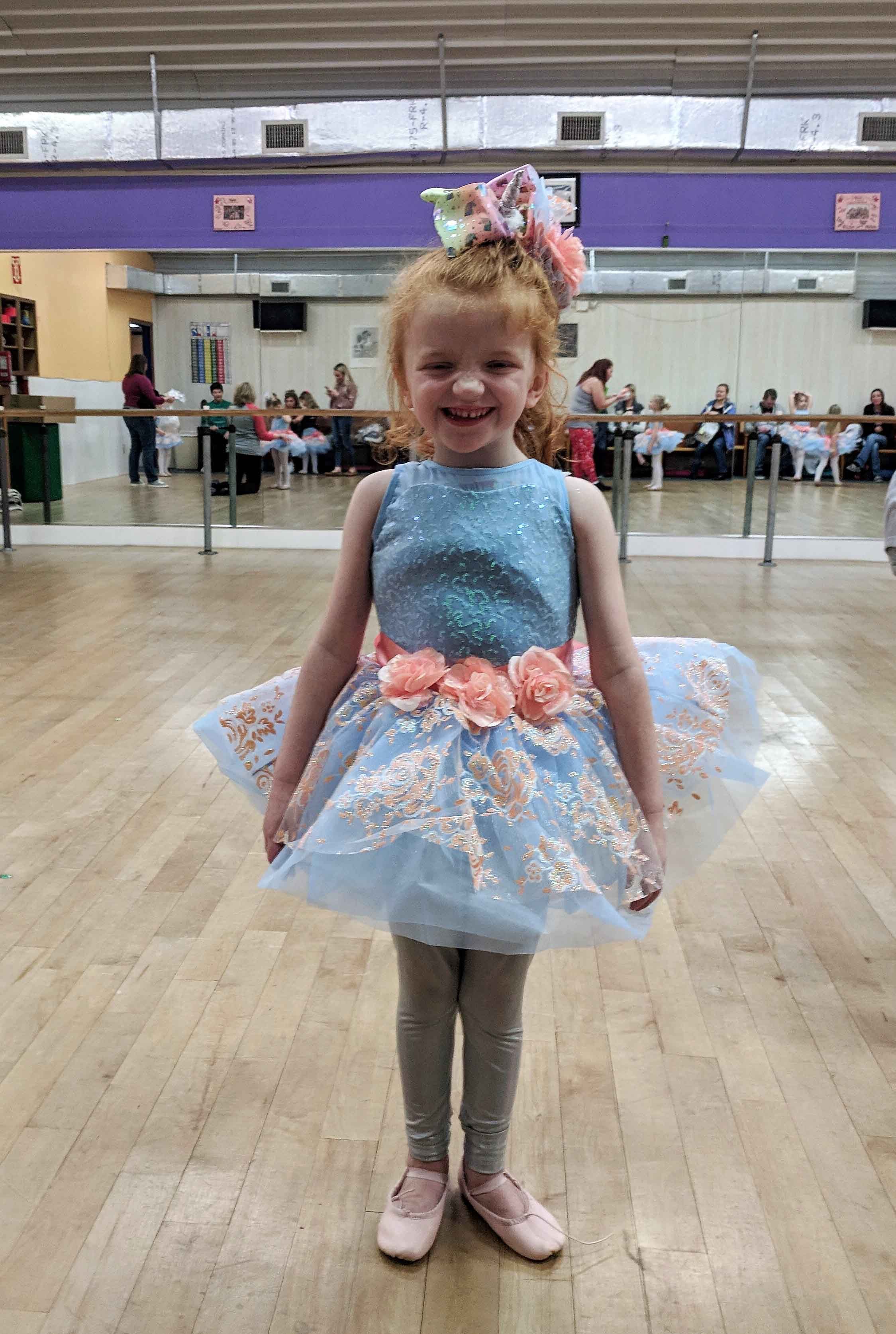