Steven Smith, 36, and Travis Ballard, 38, have been waiting for new hearts at Riley for months. During their time in the hospital, they have bonded with the younger patients – playing video games, watching movies and making crafts while they wait. 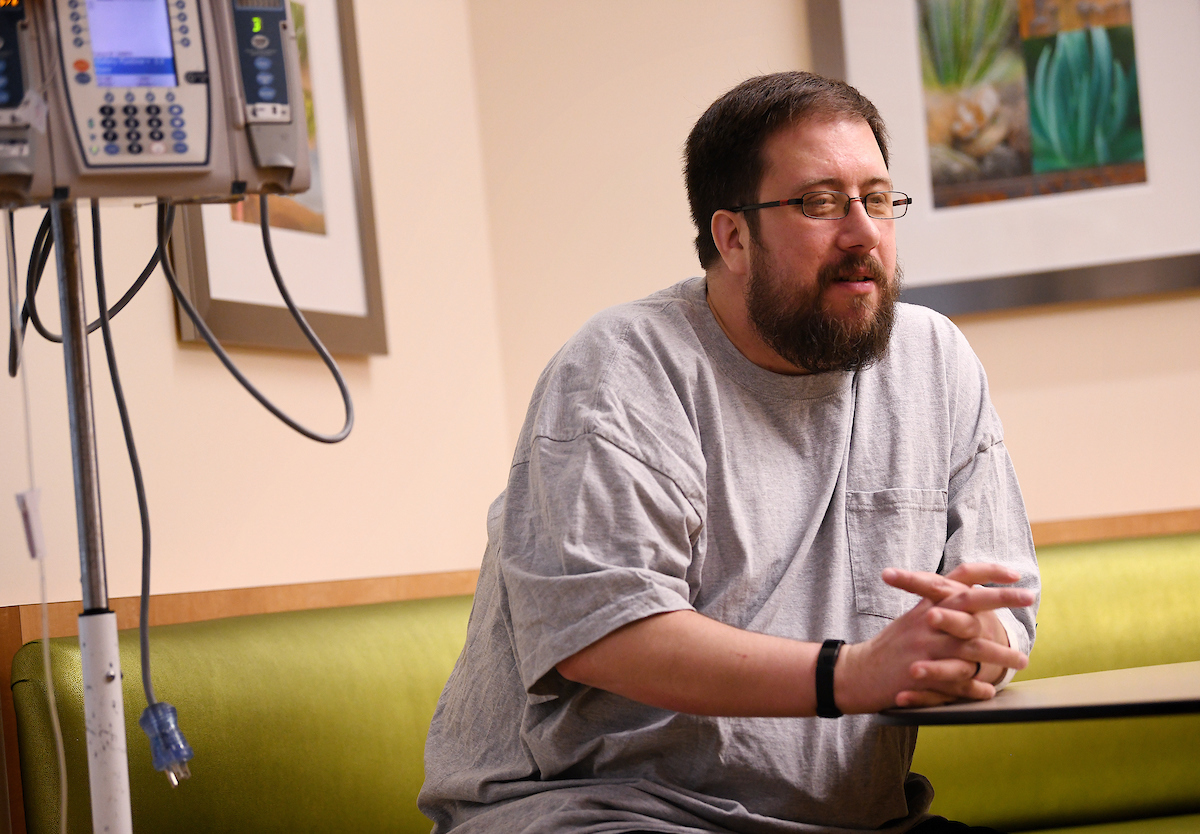 Thirty-five years ago, Steven Smith celebrated his first birthday at Riley Hospital for Children while he recovered from open-heart surgery. Earlier this month, he spent his 36th birthday in the same hospital, waiting for a heart transplant.

Smith says he’s just a big kid at heart, so even at 6-foot-1 and 36 years old, he fits right in with the younger crowd on the heart floor. 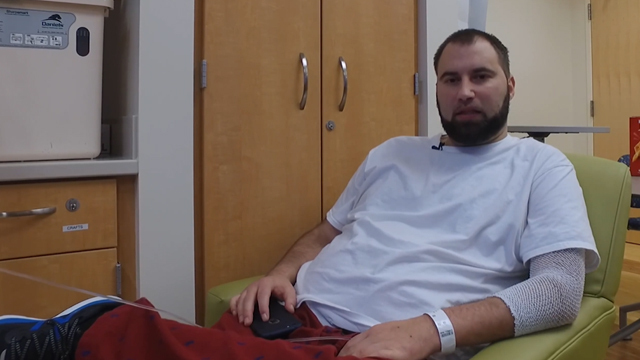 Smith is in his 17th week of waiting for a new heart in the hospital, but he’s spent much of his life knowing this day would come.

“I’ve known since I was 18 that I might need a heart by age 40. I don’t spend any time thinking about when that call is going to come or when the doctor is going to come in and say they have a heart,” he said. “There’s no point in dwelling on it. Having a congenital heart defect is the normal state of being for me, so there’s no expectation of what it will be like afterwards. I can’t think about it.”

So, the guy who studied biomedical engineering technology in college spends his days playing video games, watching movies and hanging out with the younger patients also waiting for hearts.

“Essentially, I’m a giant kid. I play cards with Teddy down the hall, I can watch the same movies over and over, we have a drum circle with the kids once a week, and anytime there’s something going on in the Child Life Zone, I’m there. I try to have fun where I can.”

He is even taking guitar lessons from one of the music therapists.

Sure, he misses his wife, Elizabeth, and his two dogs, but the Noblesville man (whose IV pole is decorated with “flair” from the Magic Castle Cart that comes around the floor) is grateful to have another patient close in age waiting with him.

“We have a lot in common,” he said of Ballard, including the same congenital condition. “It’s nice to have someone your age to talk to.”

Ballard is a huge sports fan, while Smith admits he probably couldn’t name 10 NFL players, but they enjoy watching football together in the teen room and playing video games. “It’s good to get out of the room,” Smith said.

Ballard’s wife, Carmen, and three children visit frequently from Fort Wayne and include Smith and the younger heart patients in their activities, Smith said. They even enjoyed Thanksgiving dinner together.

What are the odds of two adult men in their 30s waiting in-patient at Riley for new hearts at the same time? The timing might be unusual, but plenty of adults are treated at the children’s hospital for congenital conditions. Many are outpatient, but others, like Smith and Ballard, spend weeks or more on the heart floor.

Ryan Andis, 33, spent a week at Riley in June for treatment of endocarditis, an infection of the heart. He was diagnosed as a baby with tetralogy of fallot and has been a patient of Dr. John Brown’s ever since.

Shannon Lowe, 38, also was a Riley kid and a patient of Dr. Brown’s as a child. When her heart began to fail this year, she spent weeks first at IU Health Methodist Hospital, then at Riley, waiting for a new heart. She was transplanted on June 28 by Dr. Mark Turrentine.

It’s not that unusual for adults to be at Riley, especially if you consider an adult age 18 or older, Dr. Brown said during an interview over the summer. “We probably operate on 30 or 40 patients a year over age 18 here at Riley. I’ve been here 41 years, so I’m seeing some of the patients I operated on way back then.”

Ballard is on Day 175 of his Riley stay. It’s hard being so far from his family, but he accepts that this is the best place for him while he waits for a heart.

“As hard as it is to be here, it’s good to have someone my age to talk to,” Ballard said. “The crazy thing for me is when we compared stories, we found out we had the same condition, we had worked in similar fields (Ballard studied electronic engineering), and his birthday is the same as my daughter’s.” 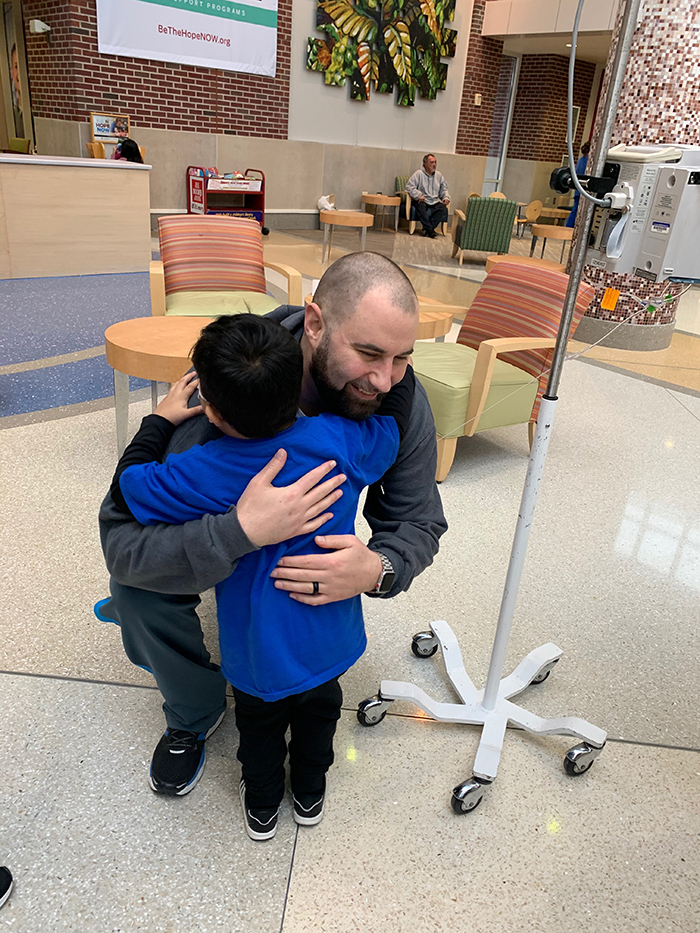 Coincidentally, they share that birthday with the baby sister of a former heart transplant patient, Ruben Santillan. Ruben, 4, and Ballard became fast friends on the heart floor. Ruben received his new heart and is back home now.

“Ruben’s mom told me she was thankful because she said I taught him to be brave,” Ballard said. “I didn’t think so, but she gave me credit for that.”

If anything, the adults learn from the kids in this experience. Like how to get lost in the world of play while you wait for the day that will change your life.

For now, both men wait and hope for the best for each other and for the Riley kids they’ve grown to love.

Two children have been transplanted, and two others wait, along with Smith and Ballard.

When that day comes for Smith, he said, “I don’t have any big goals. I just want to have a normal life – travel, have kids, be able to exercise, have a future.”