Beloved chief resident inspires an outpouring of gratitude amid grief

Dr. Chaniece Wallace died in October after giving birth to her first child. Now, her family and her Riley colleagues are keeping her spirit alive in this season of giving.

She has her mama’s eyes and her mama’s smile. And little Charlotte Wallace has her daddy wrapped around her tiny finger.

Christmas was supposed to be such a joyful time for Anthony and Chaniece Wallace and their most beautiful gift to the world – baby Charlotte.

But tragedy struck the family just days after Charlotte’s birth in October when her mom – Dr. Chaniece Wallace, chief resident at Riley Hospital for Children at IU Health – died after suffering complications from pre-eclampsia, a serious blood pressure condition that sometimes arises in pregnant women.

The shock of her death two months ago has been replaced by a profound sense of grief and loss not only in her own family but also in her work family at the IU School of Medicine, where she was serving as one of three Riley chief residents after completing her residency in pediatric primary care. 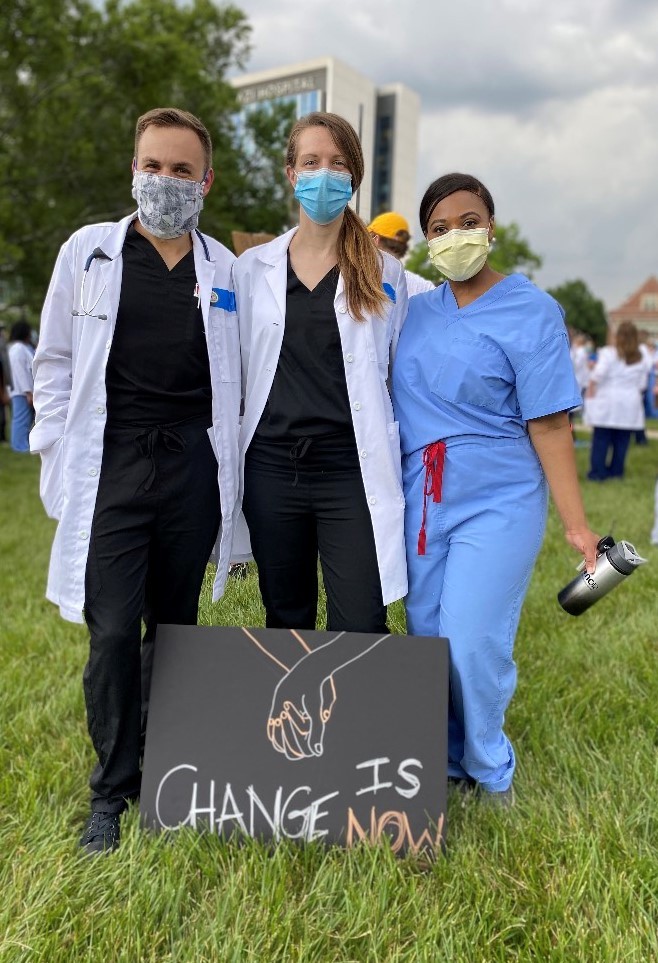 Dr. Amalia Lehmann worked alongside Dr. Wallace as chief resident, as did Dr. Eric Raynal. The three shared space in a tiny office on the fifth floor of Riley, where they talked often of their respective hopes and dreams.

“The hole she has left is immeasurable,” Dr. Lehmann said. “She had just a huge passion for primary care and a desire to improve social determinants of health in that setting. She planned to become a primary care physician in an underserved area.”

Today, a mom mug still sits on Dr. Wallace’s desk, a painful reminder of the joyful anticipation she and her colleagues felt about the impending birth of her first child.

Now, the weight of the grief they carry has been turned into a force for good, something they know their colleague would have wanted.

“It’s been amazing to see the outpouring of love and support, not just for Anthony and their family, which has been tremendous, but for our Riley pediatrics residency family as well,” Dr. Lehmann said.

It’s fitting, considering the love Dr. Wallace had for Riley.

“Coming up here from Alabama and not knowing anybody, she interviewed here and said she just felt the love, the connection to the hospital, to her co-residents and to the program,” Dr. Lehmann said.

Anthony Wallace knows how much his wife treasured her Riley family, so to see their faces at an outdoor candle-lighting ceremony, to hear their words of comfort and their memories of Chaniece as a strong, fearless, compassionate woman, meant the world to him, to his parents and to his wife’s parents.

“I’m extremely grateful that Chaniece not only had a place in her family’s heart, but she had a place in the hearts of those she worked with,” he said by phone from his parents’ home in Alabama, where he and Charlotte are spending the holidays.

“Many times people who pass away are forgotten,” he said. “But they have helped me in creating these things to remember Chaniece. People who come after will know who she was, what she stood for and where her heart was in medicine. I’m forever grateful.” 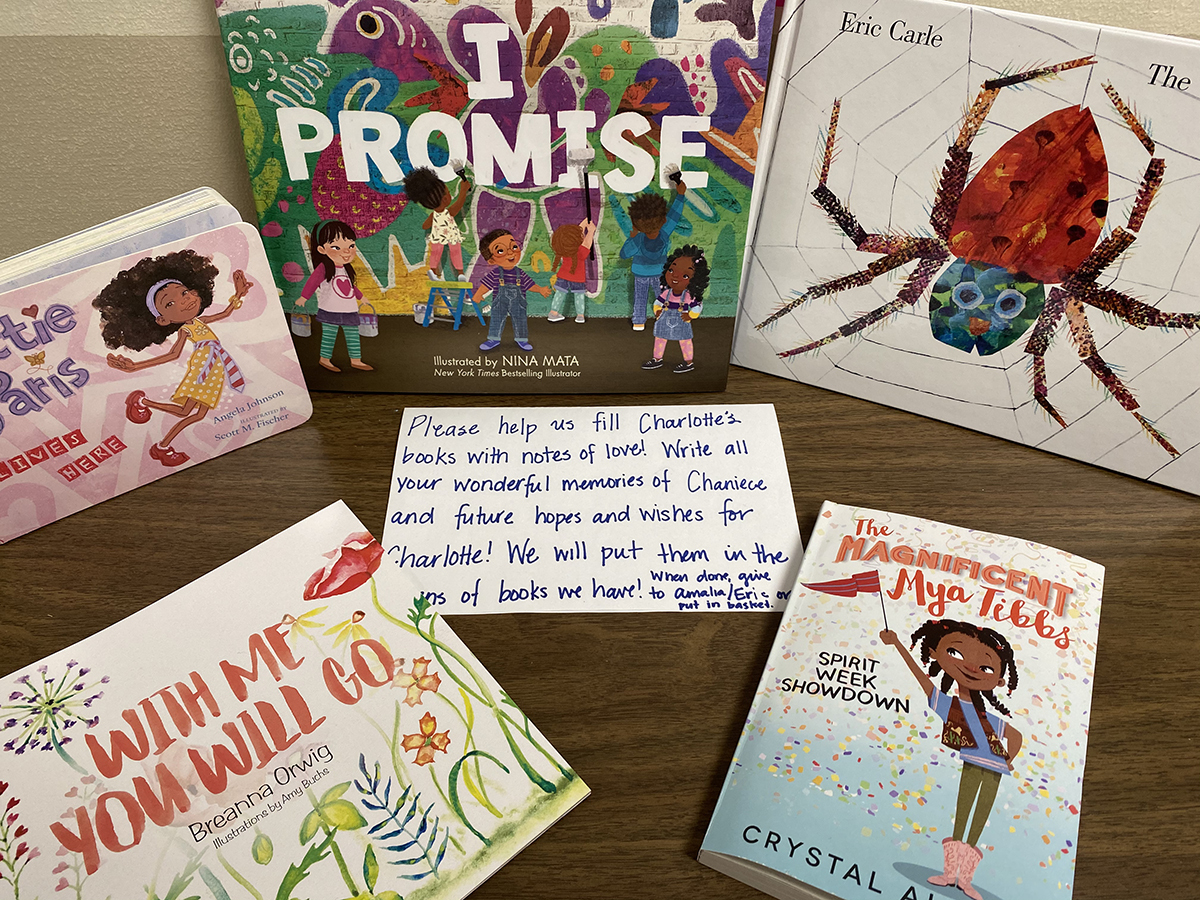 Among those memorial tributes to his late wife are a lectureship in her honor, a scholarship fund and a literacy drive – early reading was a passion of hers.

The Riley residents also worked together to finish off Charlotte’s baby registry in the days after she was born and have organized the purchase of a small library of books for Charlotte – books that feature protagonists of color, especially women.

The age-appropriate books will be given to Charlotte as she grows – from board books now to chapter books when she is in school. Inside each book will be a personal note from a Riley resident or team member sharing stories about Dr. Wallace and/or hopes and dreams for Charlotte.

Charlotte is to receive her first collection of books this Christmas.

As the holiday season swirls around them, Anthony and his family, as well as his wife’s family, are still numb with grief, but the baby in their presence lifts their mood.

You can hear the smile in Anthony’s voice over the phone when he talks about his 6-pound daughter, who has gained 2 pounds since she was delivered by emergency Cesarean section one month early. 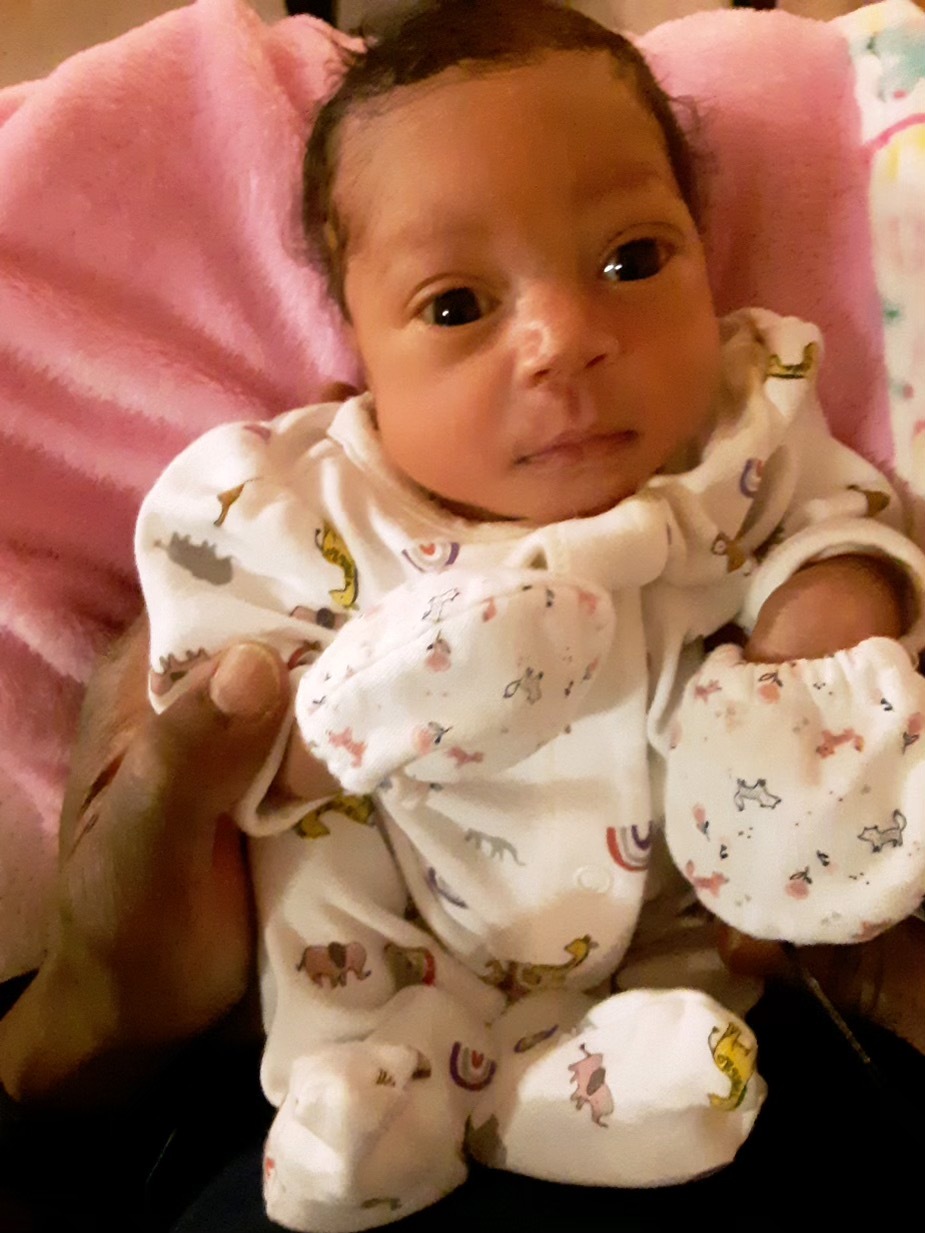 “Charlotte is doing well. She is eating, sleeping and pooping,” he laughed. “She is the sweetest, most precious baby. She doesn’t really cry, she’s very peaceful.”

She has his wife’s brown eyes, he said. And when she sleeps, she pulls on the covers just like his wife used to do.

“When she’s milk drunk, she’ll smile, and I see Chaniece.”

Anthony and Chaniece met in undergrad school at Alabama A&M University. They started off as friends, attending the same church. They didn’t start dating until after college, reconnecting when he began following her on social media.

“She would tell you that I liked every single picture on her Instagram,” he laughed.

They married April 25, 2015, and moved to Indianapolis for her Riley residency after she graduated from the University of Alabama. He took a job as a special education teacher in Indianapolis.

Dr. Wallace’s impact was almost immediate, according to Dr. Jerry Rushton, director of the residency program for 17 years and a primary care physician at Riley.

“She was from day one very focused on primary care, community service and working with underserved patients,” he said. “It was in her heart … that she really advocated for those patients to serve them clinically and in other ways.

The national outpouring of support after her death helped make a difficult time more bearable, he said, and speaks to the impact she made in her three years as a medical resident and four short months as a chief resident.

Chaniece was all about getting the job done, he said, and the fact that people are picking up the torch and continuing her legacy – whether that be addressing healthcare disparities, boosting literacy education or expanding breastfeeding support – has brought a measure of comfort to those who knew and loved her.

“We got to work together a lot, which was really a great honor,” Dr. Rushton said. He understood that as a white man he did not have the ability to connect with some patients and families the way she did, but he listened and learned, just as her other colleagues did.

IN DEATH, SHE DONATED ORGANS

For co-chief resident Dr. Raynal, her absence remains surreal, but he is heartened that her legacy will continue.

“For Amalia and I, who sat next to her every day and worked with her as closely as we did, it’s so strange to come in and see her desk every day. It is very much like the third leg of a stool got chopped out. It’s jarring to lose that.”

He remembers the last day he saw her – Oct. 20. They went for coffee, and she mentioned that she was heading to her obstetrician for a routine checkup later that day. Her due date was a month away. That afternoon she called to say she was being admitted to a hospital on the north side of Indianapolis after her blood pressure began to climb and tests revealed protein in her urine – both signs of pre-eclampsia. Charlotte was delivered later that day.

The new mom got to hold her tiny baby, but in the hours and days that followed, the 30-year-old doctor’s condition worsened. She died later that week, but not before donating her organs so that others might live.

“We have clearly seen such a range of responses since her death,” Dr. Raynal said, “from people wanting to memorialize Chaniece, to people being angry and frustrated. All of those emotions are a thousand percent appropriate when you lose someone so young and vibrant and at the beginning of her career. It’s unfair, and the why is not something we will have answers to easily.” 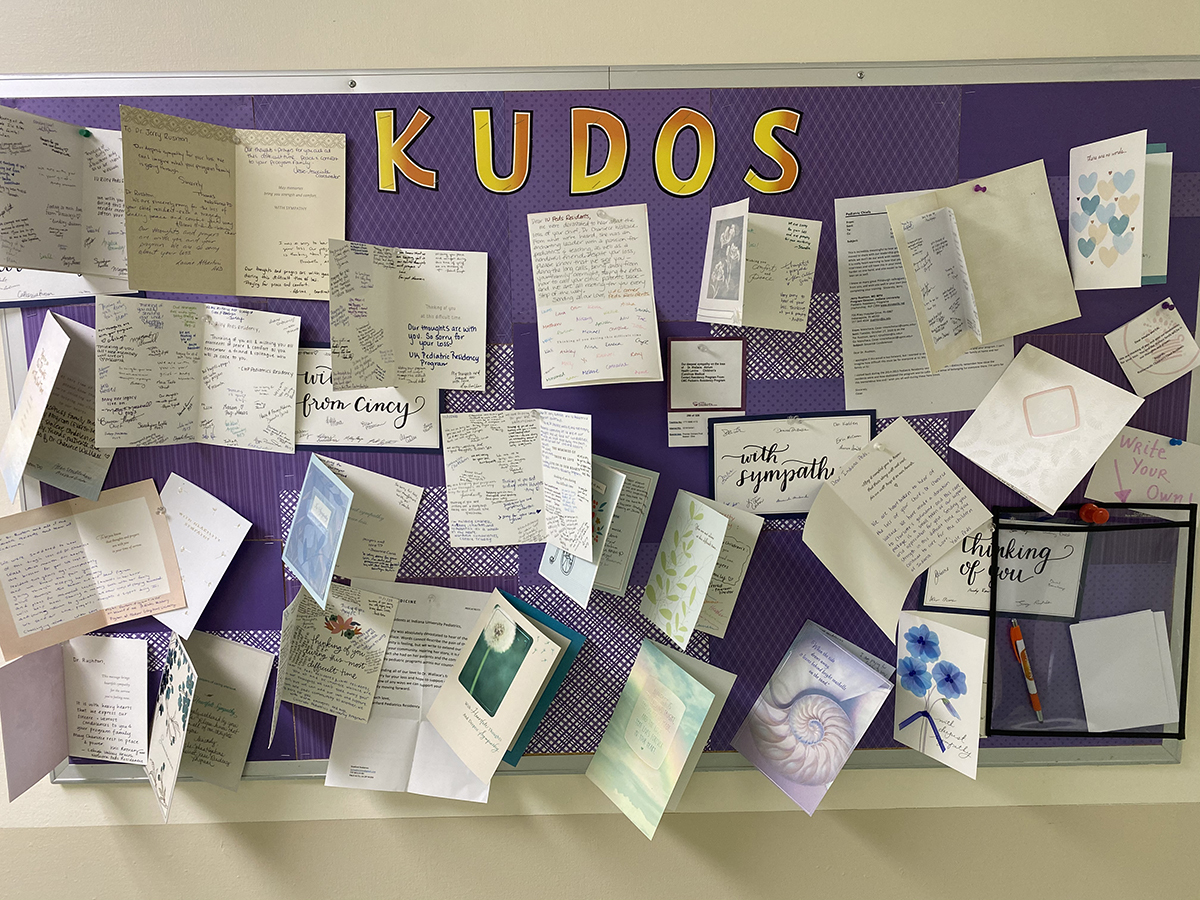 But seeing how many people she has touched, many of whom want to tell a small piece of her story, has been healing. After meeting Charlotte for the first time, Dr. Raynal said she is the best of her mother and father.

“She’s going to grow up one day and hear all these amazing stories about her mom and see all these beautiful pictures … and be like, ‘Look at my mom, look at how beautiful and amazing and ferocious she was.’ ”

That’s what Anthony hopes for as well. He plans to make sure that his daughter knows her mother.

“I’ll share with her that her mom was very loving, in the moment, living life to the fullest. She loved her family, she loved being a doctor. And whoever came into contact with Chaniece was immediately drawn to her passion. She never really met a stranger.”

He’ll tell his daughter that her mom had a special heart for the LGBTQ community and was committed to providing a safe space for them to receive the care they needed.

He and his wife had dreams for their daughter, and he will do his best to bring those to life.

“We wanted to expose her to everything,” Anthony said. “Chaniece was a ballet dancer growing up, so we discussed introducing Charlotte to dance. I was an athlete – track, football, basketball. If she shows an interest in sports, we’d be open to that. We want her to learn an instrument, to learn Spanish at an early age. We want her to be a well-rounded individual.”

That includes being raised to be a University of Alabama Crimson Tide fan like her parents. When the couple met, Chaniece wasn’t into football, he said. But within six months of dating, things shifted. She became a huge ‘Bama fan.

“It was no longer me teaching her,” he laughed. “She was giving me the updates.”

That was Chaniece, he said. When she found something she loved, she jumped in with both feet.

Now, as he considers whether to remain in Indianapolis or move back to Alabama to be closer to family, Anthony says the holidays offer time to reflect on what he has lost and what he has been given.

“People ask me a lot how I’m doing. I really don’t know how I’m doing,” he said. “In my mind, I know Chaniece is gone, but I have moments where it really hits me. She’s not coming back.”

Then he looks at his baby girl, and he sees her mother. And that is a beautiful gift indeed.