Behind The Photo Of A Newly Diagnosed Diabetic Girl

Kate Haynes was 12 when she was sent to Riley and told she had Type 1 diabetes. She remembers the kind doctors and nurses and educators who helped her through the diagnosis. Fourteen years later, she is one of them.

She sits there in a red shirt and denim overalls, a hospital band on her arm. There are pamphlets spread in front of her on the table and papers that look like charts.

They are charts 12-year-old Kate Haynes will have to start filling out.

The insulin isn’t there in the photo, but that is coming, too. The injections and the blood pricks.

There is a smile on her face, but reality will soon change that. When she gets home and realizes this isn’t strep throat or the flu. This is a disease that isn’t going away.

This photo of Haynes was taken 14 years ago at Riley Hospital for Children at IU Health, just days before Christmas.

Haynes went to the doctor for what her parents thought was a urinary tract infection. They didn’t want her sick over the holidays. Ketones in her urine and a blood test revealed something much more serious -- Type 1 diabetes.

She was whisked from the doctor’s office and sent immediately to Riley and admitted. In this photo, her diabetes education materials surround Haynes. She is learning how life is about to change drastically.

Haynes remembers all the kind doctors and nurses and educators at Riley who tried to make diabetes seem less scary and more normal.

She remembers them well. And 14 years later, Haynes is one of them.

It’s hard to spend a lifetime at Riley, coming in every few months for visits, and not want to be a doctor or a nurse. Haynes, 26, opted for the latter.

She is a diabetes nurse educator at Riley, helping patients manage their diabetes, helping them live with the disease. Haynes also educates at other IU Health locations -- at Methodist Hospital and outpatient clinics. 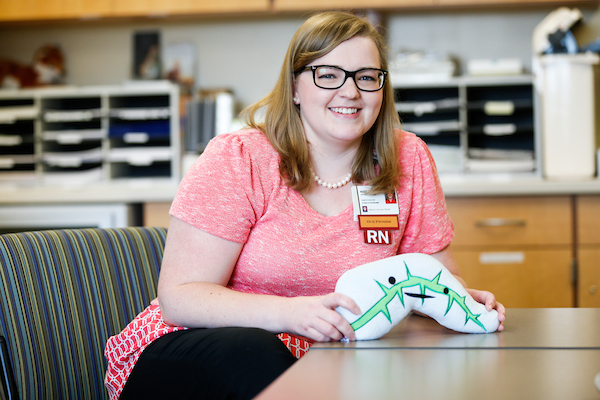 But her sweet spot – her edge -- is sitting at the table with those newly diagnosed kids. Telling them it’s going to be OK, that life can be good, and normal and fun with diabetes.

“I have diabetes and I’ve been living with this almost 15 years,” she will tell the patient and family. “I hope that encourages you. It’s going to be OK.”

She tries to put them at ease.

“It seems bad now, but things are going to be alright,” Haynes tells them. “You’re going to be able to travel and play sports, do everything other kids do. You just have to do a little bit more to eat your food.”

A little bit more like the insulin and the blood sugar testing. Some kids are scared and cry. Some are serious learners. Some seem like it’s no big deal.

And some are smiling. Like Haynes was smiling in that photo.

It isn’t a fake smile. Haynes says she wasn’t scared after her diagnosis. She remembers growing up, her family having conversations at the dinner table about her grandpa, who had Type 2 diabetes.

“I come from a family with a very strong faith background,” she says. “I put a lot of my faith in God that I was going to be OK.”

But then, Haynes returned home to Richmond, Ind.

“It doesn’t hit you until then. This disease isn’t going away,” Haynes says. “This is something you have to deal with rest of your life.”

So, there were days after her diagnosis that Haynes had a hard time coping. There were times it didn’t seem fair.

“My parents were good about giving me space,” she says. “I remember right after my diagnosis, they let me stay home a couple of days from school. I was having a tough time.”

There were kids who teased Haynes and made fun of her. Kids always find a reason to pick on someone.

Haynes never really felt truly connected with or understood by a peer until a camp for college-aged students with Type 1 diabetes. There, she met all these young adults just like her.

“It’s just like another world when you’re in a room full of people that know what’s happening and know what you’ve been through,” Haynes says.

That if you don’t have insulin you could die.

“When you have that mortality in your head every day you have a different perspective on life,” she says. “Once I met that group, I was on fire. I wanted to learn everything possible.”

She wanted to use her own feelings and experiences to help others going through the same thing. Her nursing degree, she decided then, would be used for diabetes patients.

A 12-year-old girl came in the other day to Riley, a newly diagnosed diabetic.

That patient resonated with Haynes. She reminded Haynes so much of herself in that photo from 14 years ago. She knew just how she felt. 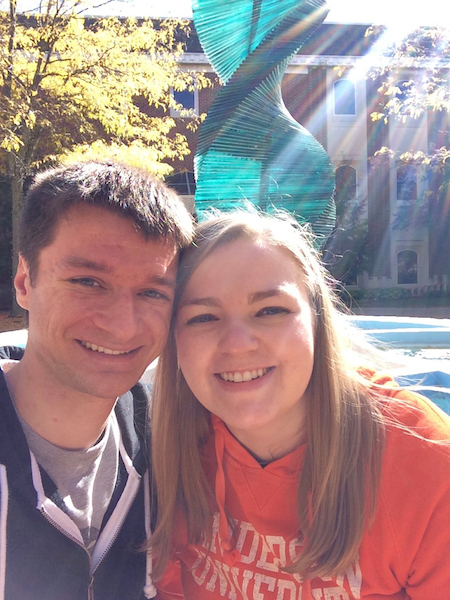 “She was a lot like me, very much a people pleaser, wanted to please her parents, responsible and independent,” Haynes says. “I told her, ‘I hope you’re going to be a mini me and do really well. I know you will. I know you will be great at this.’”

At home: She and her husband, Michael, just closed on a house in Indianapolis. Lately, there has been a lot of packing, unpacking and moving for the couple.

Road to Riley: Haynes received her bachelor’s degree in nursing from Anderson University and has been with Riley a year and a half.

Fun fact: The doctor who was Haynes’ pediatric endocrinologist, John Fuqua, M.D., is still at Riley. Haynes often gets to work alongside him.

Extra step: Haynes is heading up a program for teens with diabetes, which will help them transition out of the pediatric stage and understand why they are doing the things they do. It will also offer specialized topics like how to manage exercise with diabetes.

Childhood Diabetes: What You Need to Know

As adults, we know we need to watch our cholesterol in order to maintain good health. But did you...