Ivy Case has Trisomy 9 Mosaic, a rare genetic condition with a devastating prognosis. And, yet, Ivy is beating the odds.

Ivy Case is blowing bubbles. Sometimes, if she’s in the mood, she will curl in her lower lip and crack the tiniest of smiles. She has a sweet babble and will squeal if she recognizes a voice.

She also has a G-tube, oxygen, severe vision impairment and a look that, at times, will cause strangers to stare.

Ivy is 10 months old. She was born with a rare genetic condition called Trisomy 9 Mosaic. Google it and the results are devastating and daunting – an unending list of abnormalities and malformations.

Yet, Renee Case saw sweet Ivy on a special needs adoption posting in the summer of 2017.

“And I could not get her out of my mind,” she says. “I just knew there was something there. Now, we tell her that we found each other.”

Ivy is one of just 200 documented cases of Trisomy 9 Mosaic in the world. She is being treated at Riley Hospital for Children at IU Health.

Ivy’s condition – sometimes called T9M -- is a chromosomal disorder in which the entire ninth chromosome appears three times, rather than twice, in some cells of the body. Mosaic indicates that some cells contain the extra chromosome 9, while others have the typical two chromosomes. 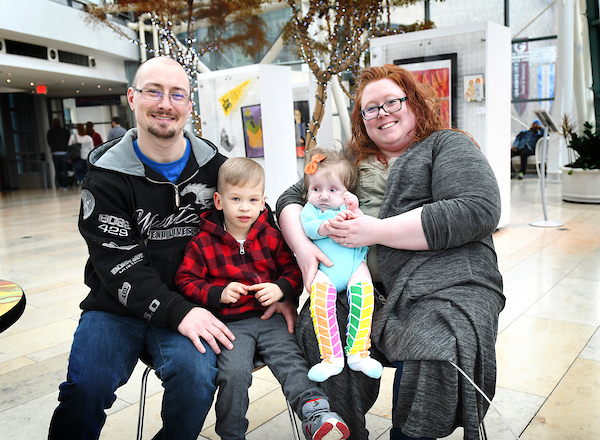 To Renee Case and husband, Joshua, Ivy is perfect. The couple, who live north of Warsaw, Ind., brought her into their home in August.

They had already fallen in love with another child with special needs – their adopted son Jacoby.  And that love prompted them to seek out Ivy.

“It just felt right,” says Joshua Case. It felt right to choose the path of caring for children with special needs. “There is a reason we were supposed to be both of their parents.”

The reason? Well, it’s wonderful and beautiful. Both Jacoby and Ivy are thriving, beating the odds of their prognoses.

“When your kid is blowing bubbles like this, that’s huge for her,” says Renee Case. “It’s about finding the beauty in the little things that a lot of people take for granted.”

Take sippy cups. Joshua and Renee went through more sippy cups than they can count to find one that Jacoby, now three years old, would use. His genetic condition causes sensory issues.

They didn’t know they were adopting a child with special needs, not until after Jacoby was born. They met Jacoby when he was two days old in the hospital. He spent 21 days in the neonatal intensive care unit before going home with them.

When he was 9 months old, the Cases decided to do some testing. They knew Jacoby had been born with microcephaly, a condition in which the brain does not develop properly, resulting in a smaller than typical head.

He also had a two-vessel umbilical cord, rather than three vessels, among other issues.

And yet, all those things that were supposed to happen with Jacoby either didn’t or are mild, Renee Case says.

He wears braces on his ankles. Jacoby got his first set right before his first birthday and started walking weeks later. He has had some speech issues and, emotionally, he is also delayed. 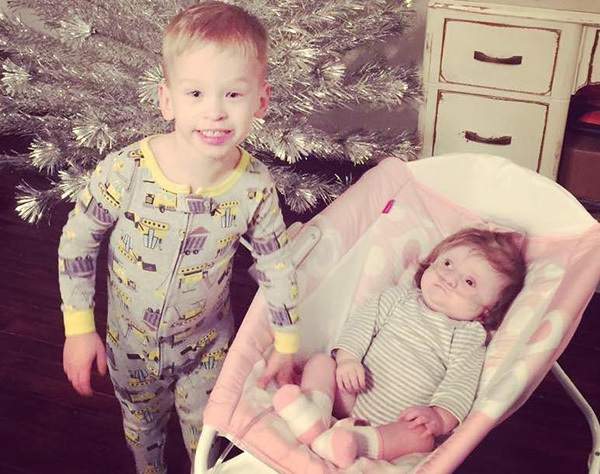 Yet, Jacoby is doing so many great things. On this day, he is preparing to be line leader at his preschool the next day.

He knows – and talks about – every kind of dinosaur and whale there is.

“He is so incredibly smart,” Renee Case says. “He knows so much for his age.”

It’s evident Joshua and Renee Case are so very proud of their children. They are masters at putting life in perspective.

Besides all those bubbles and smiles, Ivy is starting to roll over a bit from back to side. At 10 months old, she is developmentally at about four months old.

“Which is really good for her diagnosis,” Renee Case says. “She’s just doing so good.”

The Cases didn’t know how Ivy would do when they took her into their home last summer, adopting her from a family in Texas. But they fought to find out.

For the first two months, Ivy had anywhere from two to five appointments every week – doctors, specialists, therapists and evaluations.

What they ultimately discovered was better than expected. Many of the issues, including heart problems, common to Trisomy 9 Mosaic aren’t present with Ivy.

And yet, no matter what might come along for Ivy – or Jacoby --  in the future, Renee and Joshua Case will be there supporting them all the way.

“We were meant to be their parents,” Renee Case says. “We were put into each others’ lives for a reason.”