2018 was the year of babies in the respiratory therapy department at Riley Hospital for Children at IU Health. We’re not talking patients but rather the new children of team members.

In all, 17 of the hospital’s respiratory therapists were pregnant last year, delivering babies from January 15, 2018 to Jan. 1, 2019. Nine girls and eight boys – for those keeping score.

Scheduling around those maternity leaves might have been a challenge, but imagine getting all those babies and their moms in one place for a photo.

Well they did it – almost.

Lindsay Cain was the first to deliver her baby last year, so it follows that she took the lead on organizing a mom-baby gathering Saturday in the Riley Outpatient Center.

“It was the only day we could get all of us off. I don’t know how we did it,” she said as she chased 15-month-old Tinley around the ROC lobby. “It was a crazy year. Dealing with 17 pregnant RTs working their tails off and then making it through 17 maternity leaves. But we made it!”

Cain and her peers had noticed recent media coverage of nurses in other hospitals around the country after a baby boom, so she wanted to spotlight the Riley RT department. 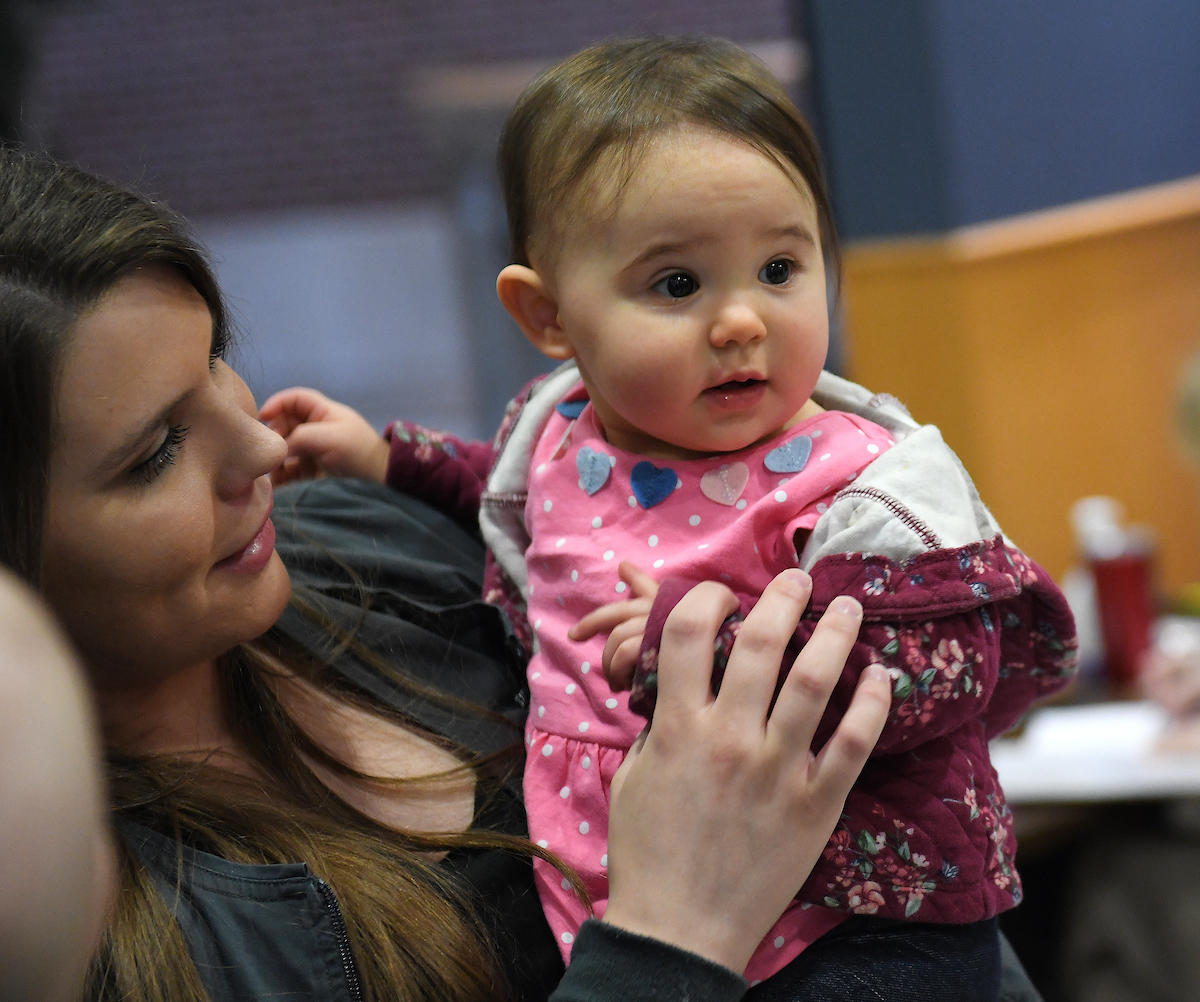 While a few of the therapists have moved on to other jobs since last year, 13 of them converged with babies and older kids in tow on a cold, rainy Saturday for a photo shoot. Some of the babies are old enough to walk now, so they toddled around as their moms and a few dads struggled to keep up with them.

Others, like 3-month-old Cadmin, were nestled in strollers, oblivious to the spectacle around them. Cadmin was a New Year’s baby, arriving Jan. 1 of this year. He’s the third boy for Ashley Fleming, who said having three kids is a game-changer.

“It’s hard, I’m not gonna lie, but it was fun having all these moms as a resource,” she said.

“It was nice having people you could relate to, giving advice about working and breastfeeding,” agreed Janae Cox, whose son Emric turns 1 on Wednesday.

Marie Hatfield, whose daughter Harlow is 9 months old, said staffing during the year was hard, “but it’s neat that we can all kind of raise our babies together.”

Chelsea Cronin’s little guy, Jackson, was celebrating his first birthday Saturday. He loves Baby Shark, so his family had an ocean-adventure party planned for later that day.

“He’s my first baby,” Cronin said. “I’m trying to keep him from kissing the other babies.”

For Elizabeth Cottom, 1-year-old Benjamin is her fourth child, but her first boy. She was tired after working a hospital shift the previous night, then driving home to Terre Haute and back to Indy again Saturday for the photos.

But it’s worth it, she said.

For a room full of infants and toddlers, there was surprisingly little crying. There were feedings, diaper changes and general chaos, but all the babies posed beautifully for their photo – each wearing a tiny white shirt with a number from 1 to 17, based on their birthdate. 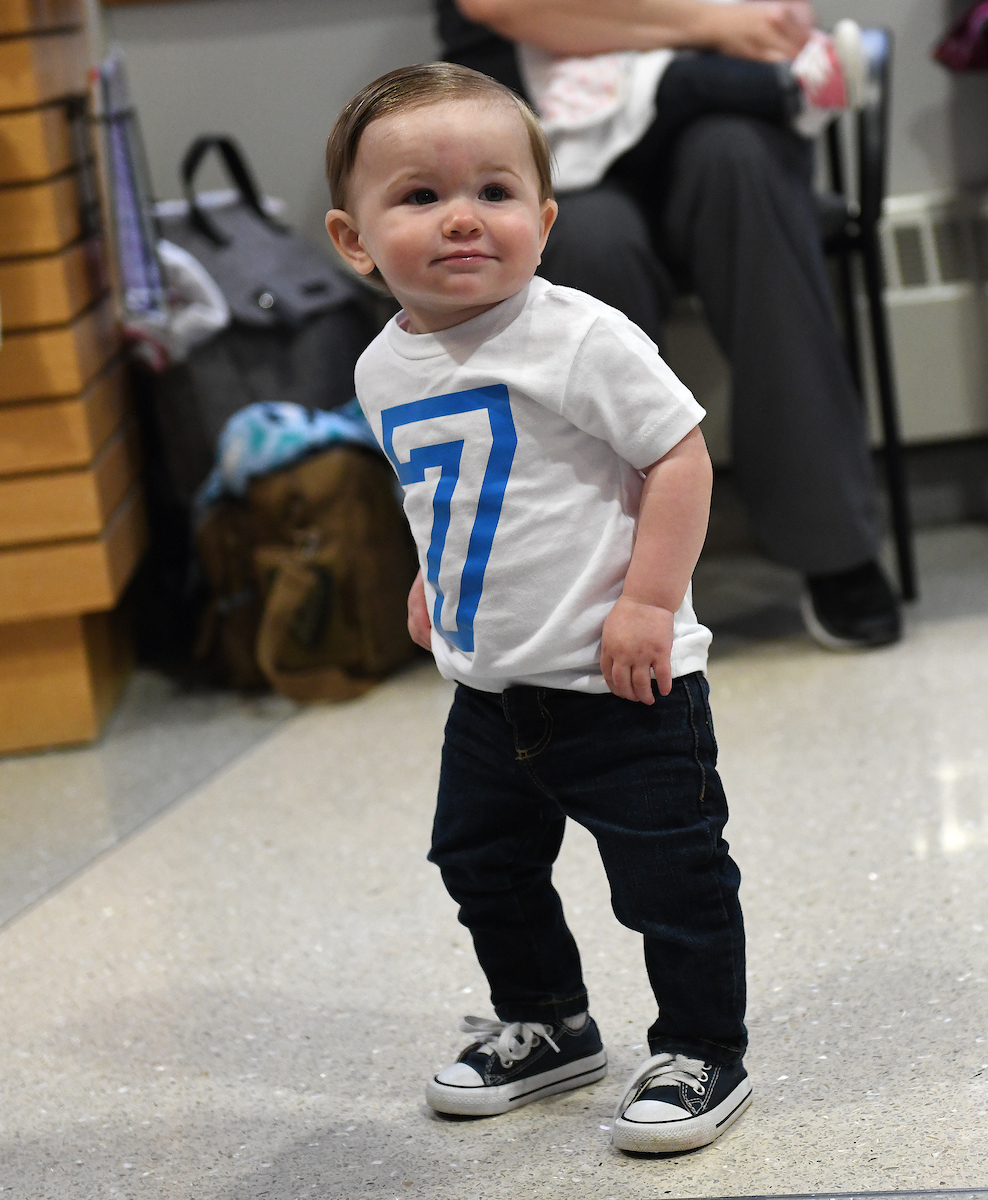 As Ashley Fleming talked with other moms and their babies, she wondered aloud if there might be some future love matches among the little ones in the group.

“Maybe we’ll all be in-laws some day!”

Rita Williams, who recently retired as director of the Respiratory Therapy Department at Riley, couldn’t attend Saturday’s reunion, but she said later that the babies of 2018 made the year “remarkable and blessed.”

“These children were the highlight of my life the whole year.”

Obviously with that many therapists out of the workforce over the year, there were staffing challenges among the team of 100-plus, she said, but the babies made it all worthwhile. “I was simply privileged to have managed the Respiratory Department at that time, and I miss them all!”