This high school show choir star lost a leg to cancer, but he’s tired of that label following him around. As he settles into Indiana Wesleyan University, he’s thinking of trying out a new story to explain his prosthetic leg – something that involves a shark.

Austin Hewitt doesn’t mind your prayers, but he doesn’t want your pity.

The 18-year-old cancer survivor is looking ahead to the rest of his life now, and that starts with college. 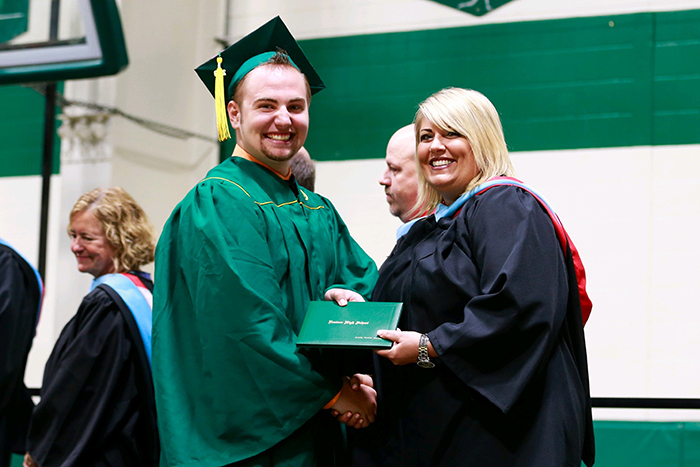 Saturday was move-in day for incoming freshmen at Indiana Wesleyan University in Marion, Indiana. It’s just a 30-minute drive from his home in tiny Greentown (population 2,369), but it represents a new start for the guy everyone in high school knew as the cancer kid who lost his leg.

“In high school, I was labeled the kid with cancer. It’s not a bad label, but I don’t want to be known in college as ‘the freshman that had cancer and got his leg cut off.’ I’d rather be known as ‘the kid with the shark bite – that’s awesome.’ ”

It’s really just his way of trying to put people at ease, a good conversation starter, he said. And maybe it will make people laugh. 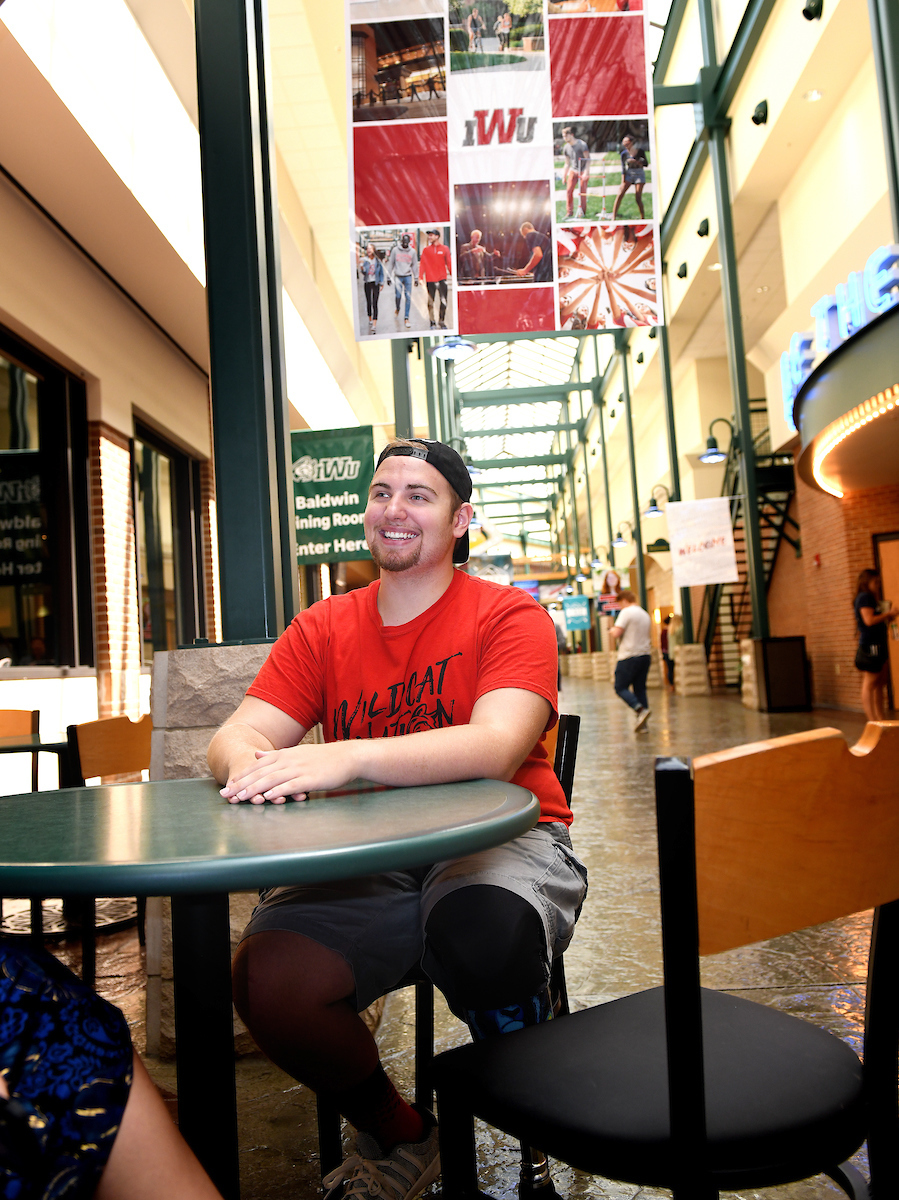 A year ago, Austin wasn’t sure he would even be here. Not just in college, but on this Earth. The cancer that he had beaten once – missing most of his sophomore year of high school for treatment at Riley Hospital for Children – was back.

When Riley oncologist Dr. April Rahrig told Austin and his family in June 2018 that the recurrence of Ewing sarcoma left him with a 10-15 percent chance of long-term survival, they were crushed, his mom said.

“We didn’t think he’d be able to go to college, his diagnosis was so bad,” Tonya Hewitt said.

Yet here they are, mother and son, sitting in the Maxwell Center at IWU, ready to show visitors around the campus of the 3,000-student Christian college.

“That’s my dorm over there,” Austin says, pointing to Hodson Hall. Adjacent to the hall is a volleyball court in the sand. That’s important because the freshman plans to join the school’s intermural team next month.

The music therapy major, church youth group leader, singer and dancer is not an athlete, but volleyball gives him – and his prosthetic leg – a good workout. And he figures it’s a good way to meet new friends.

“After hiking in West Virginia, going white water rafting and dancing, I can do this,” he said. “I can do anything.”

SHOW MUST GO ON

Positivity is part of Austin’s DNA. He doesn’t know another way to be, but don’t be fooled into thinking this has been an easy journey.

“I have a little black cloud that follows me around,” the teen said while sitting outside on a gorgeous summer day. “As positive as I am, that doesn’t mean I don’t have bad luck, but I just keep smiling through the rain.” 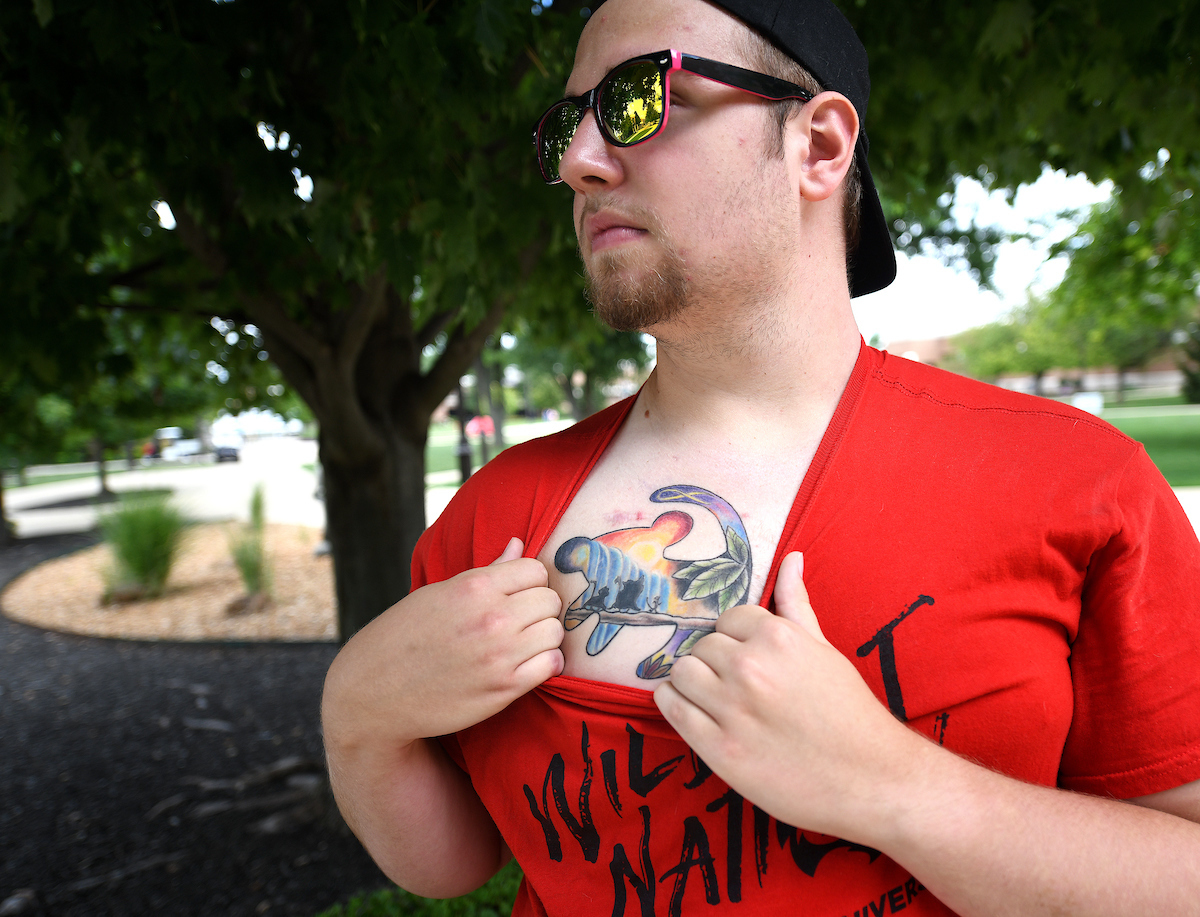 He knows that sounds cheesy. Part of it is his stage training. Austin loves to perform. He played the lead in his high school’s spring musical and plans to audition for IWU’s performing choirs. He’s a “Lion King” fanatic, wearing a “Hakuna Matata” (No Worries) cap and themed socks on his campus tour.

But his passion for the Broadway musical and movie goes much deeper. On his chest, around the scar from the port that was put in on his 16th birthday to deliver chemo, is a “Lion King” tattoo – his first. It shows the outline of a lion with the characters going over the Fire Tree Bridge singing “Hakuna Matata.” The tail wraps around the port scar, and inside the tail is an inking of a cancer ribbon.

The tattoo suits him, his mom says. She has her own cancer ribbon tattoo on her arm. It’s a reminder of all they’ve been through together.

“He has taught me so much through this journey – perseverance, positive attitude, never quit,” she said. “Nine out of 10 days, even when he was super sick, he had a smile on his face. I couldn’t have done that.”

Chuck and Tonya Hewitt’s eldest son turns 19 next month. He’s ready for a change of scenery, he said, and hopes that his being away from home will allow a little more light to shine on his younger brother, Gatlin.

“For the longest time, the attention was on me,” Austin said. “Finally, he gets to be the only child for a while.”

After turning 18 last fall, Austin made a very adult decision, one that his parents weren’t fully on board with, but he was adamant. He quit chemo in December, six months before his treatment was to end.

“He was supposed to get chemo every three weeks until June of this year,” Tonya said, “but it was so hard on him.”

It was his senior year of high school, and he had already missed so much. The chemo was “horrid” this time, his mom said. They took his leg off on Halloween, he couldn’t go to school, and he had a musical coming up that he desperately wanted to be in.

If his time was limited, he wanted to enjoy what little he had left, he reasoned. If he survived, “they can write a book about me.”

In February of this year, Dr. Rahrig called to deliver the news they all had hoped and prayed for – he was in remission again.

“Hallelujah!” was his mom’s response.

He returns to Riley every three months for scans. So far so good, Tonya said. His next visit will be in November.

As that time draws near, the anxiety will no doubt kick in, as it always does. But Austin said he appreciates that the people at Riley keep it real.

“One thing I’ve noticed throughout my treatment is people want the inspirational story, but sometimes you need the stronger stuff,” he said. “Yes, I am very positive, but that doesn’t make the situation OK. There’s not enough research, not enough awareness of pediatric cancer.”

That’s the reality behind the smiling face, he said.

He chose the music therapy major after working closely with Riley music therapist Caitlin Krater. Before that, he didn’t know how best to weave his passion for music into a career.

When he began working with her, he said, he felt a calling. “I think this is destiny.”

He plans to get a master’s in the music therapy field, followed by a doctorate in psychology from IUPUI. Then if his grand plan works out, he’ll return to Riley to work as a music therapist.

He remembers the connections he made with nurses who themselves had been treated for cancer as children at Riley.

“It was always nice to talk to people who could relate to what you were going through.”

His dream is that he can do the same for others someday.