Ari was an 8-month-old cheery baby. Then one day, he started staring off into space. He couldn’t sit up. He wouldn’t eat. A tumor was growing inside his brain and before things were over, it had stolen almost everything from him. Ari, 4, can’t talk or walk or eat on his own, but just last week at Riley, he showed us how he can hum a spot on tune to “Itsy Bitsy Spider.” And how he can walk. Yes. Ari is taking steps.

For eight months, Ari Halderman was a bubbly, cheery, joyous baby boy. He was sitting and babbling and playing.

But then the play stopped. Ari would sit and stare off into space.

Then, he stopped sitting. Ari would lay over on the ground. He wasn’t eating much. That joy wasn’t in him.

Doctors measured Ari’s head and the results were alarming. It was extremely large. A scan revealed the devastating reason.

Ari had a fast-growing cancer called atypical teratoid rhabdoid tumor, a cancer of the brain and spinal cord. He was given a 10 percent chance of surviving.

Before his parents, Jenny and Colby Halderman, had time to absorb all that was happening, Ari was in surgery to have the tumor removed.

He made it through. And that was good.

“But when he woke up,” says Jenny Halderman, “he was a different Ari.”

And not in the way she and Colby had hoped. 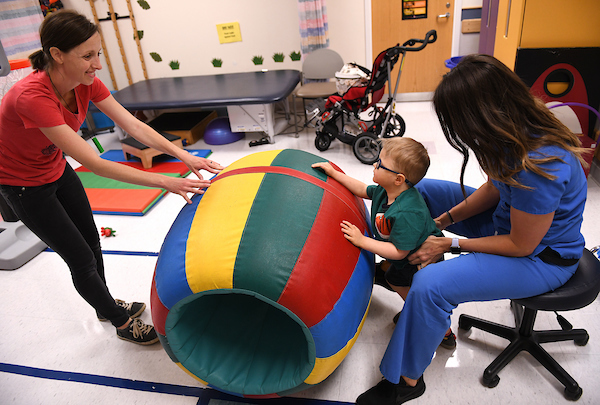 Ari is rolling a colorful, soft barrel, putting one foot in front of the other to the rhythm of the song. He is walking, for the first time. He will turn five years old next month.

Ari came to Riley Hospital for Children at IU Health three months ago for physical therapy with Sarah Johnson. The family, along with Ari’s 2-year-old brother Everett, moved from Oregon back home to Indiana in July.

His cancer and the treatments took nearly everything from Ari. He’s had 11 surgeries.

He doesn’t talk, though he can hum a song spot on. When Johnson started singing “Itsy Bitsy Spider” last week, Ari finished it.

He doesn’t eat; he is fed by tube. He has hearing loss and eyesight loss. He wears an eye patch most days on his left eye, to strengthen his weaker, right eye.

And he doesn’t walk. Actually, he didn’t walk. He does now. With Johnson’s help, Ari has started taking steps, with a little support from her.

“We want Ari to be able to go and play with friends. The amount of work it takes for him to play and enjoy it is a lot,” says Jenny. “I have a new appreciation when I get to watch a child just play and be a kid.”

Ari may not be there yet. But he has come so far.

After his first surgery at eight months old in February of 2014, things took a turn for the worse. Ari started having seizures. He almost died.

“It was day by day, moment by moment,” Jenny says. 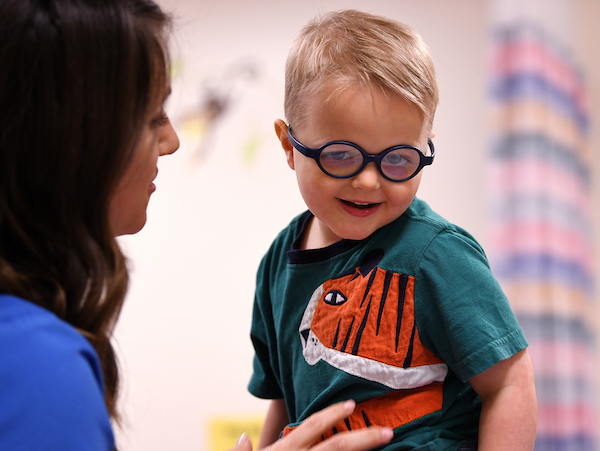 And then, just six months later, the tumors returned. This time, doctors told the Haldermans that Ari probably wouldn’t make it. There was a 4 percent chance of survival.

He had another brain surgery to remove the tumor. And then he had more treatment.

“Even in the hard stuff, we tried to have joy,” says Jenny.

When Ari went through radiation, which meant six weeks away from home, the family rented a river house. They made sure to create happy moments every day.

“Just count the days you get and really make the most of them,” Jenny says. “I feel like God really did give us the strength we needed to get through it and I felt like His presence was here. It was a long, hard, emotional journey and it still is.”

Ari is considered a survivor now. If he makes it to five years, the chances of the tumors coming back goes down greatly. But secondary cancer risks increase, due to his treatments. 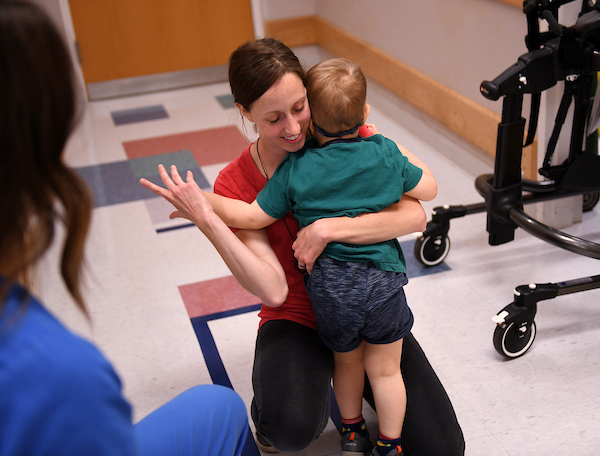 The Haldermans will have to monitor him for the rest of his life.

And while survivorship is the most important goal for a cancer patient, Jenny would also like people to remember what happens afterward.

“Once you get your kid through it, they are left really broken,” she says. “Most people think it’s all back to normal. With the brain, it impacts the whole system. Supporting children through that is a struggle.”

Physical therapy is hard. When Ari finishes, he spends time after just wanting to rest.

Johnson is working on balance and strength with Ari. He works on stepping up onto a platform to make baskets. He pushes that barrel and walks.

But more than any of that, the big, overall goal for Ari is to create body awareness, Johnson says.

“We want him to be safe when he moves,” she says. When you think about kids learning, they have to be able to explore safely and pay attention.”

And while Ari is relearning and learning new things, Jenny watches in awe.

“There are so many fighters like Ari out there. I can’t get over how much they go through and they are still smiling and playing,” she says. “These kids are truly amazing.”