An accident left this little girl partially paralyzed, but now she’s regaining use of her left arm and leg

In recognition of occupational therapy month, we are spotlighting a few of our team members and patients as they work together on the road to recovery from injury or illness.

Before the accident, 4-year-old Isabella Whitaker’s favorite thing to do was to run around her house and sing and dance.

Now the little girl gets around in a wheelchair at Riley Hospital for Children. Bella, her sister and her mom were injured in a car accident last month. Bella was hurt the worst, suffering a spinal cord injury that left her temporarily paralyzed on the left side of her body.

When Riley occupational therapist Whitney Kozlowski began working with her a couple of weeks ago, the girl had no movement on her left side.

“She had nothing. She could not use her left side at all, arm or leg,” Kozlowski said. “Now she’s getting a lot back, she’s standing and moving.”

Indeed, Bella, with her long blond hair tied back in a ponytail, grimaces as she pulls herself out of her wheelchair and steps forward to stand next to Kozlowski for their twice-daily therapy session.

“Did I walk?,” she asks Kozlowski. “You just walked two times,” the therapist tells her. “Do you think you can climb up here?” Kozlowski is encouraging her young patient to try to move onto the therapy table, but Bella is reluctant. “I’m going to help you,” she tells Bella, and between the two of them, she maneuvers her way from a step stool onto the table. 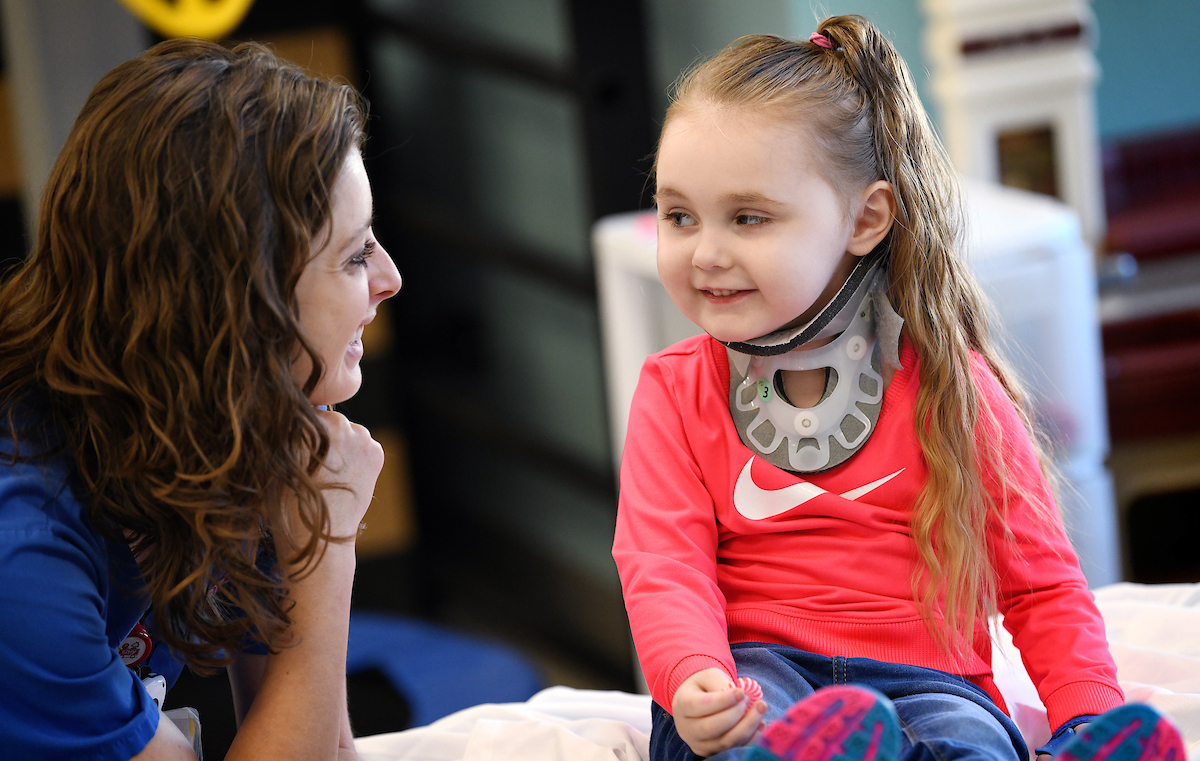 Every task, no matter how small, is therapy for Bella. It’s all about retraining her muscles and her brain to do the things they’re meant to do.

“Her biggest challenge initially was anxiety over not knowing what’s going to happen,” Kozlowski said. “But now that she’s built a rapport with the therapists, it’s helped a lot.”

Bella has physical, occupational and speech therapy multiple times a week. The speech therapy is due to her need for respiratory support after the accident and a feeding tube that was just removed the previous day.

A tiny bandage on her face marks the spot where the G-tube was removed, but Bella won’t take it off. Her mom, Dana, says her daughter is terrified of getting Band-Aids taken off. They stay on until they fall off, she said.

Two Band-Aids that she had on when she came to the hospital stayed on until she got her first electrical stimulation treatment. Team members call it the tickle machine to make it seem less scary for young patients. The treatment is designed to retrain the brain’s pathway, Kozlowski explained.

“We put electrodes on the muscle and it sends small shocks that help the brain re-create the pathway,” she said. “It’s like the roadmap is messed up. It’s trying to send a signal, but the signal’s not going to the muscles of the arm.”

The treatment is a good first step when a patient has no movement, she said. Bella’s first time on the tickle machine elicited good results. “We plugged it in the first time and she thought it was hilarious.”

Now, Dana Whitaker is watching as her daughter lays on her stomach and tries to prop herself up with her elbows to color. Bella uses her strong right arm to hold her body up and her weak left arm to hold the marker, while Kozlowski guides her left hand to reach and place dots on the picture.

“When we have an injury like hers, the best way to get return of muscle control is with weight-bearing exercises and just using it,” Kozlowski said. “Lean and reach,” she tells Bella. “Go, arm. Push it, push it.”

Kozlowski, who has been an occupational therapist at Riley for nearly two years, has a positive, encouraging way about her. She jokes with Bella, she offers strong support, and she lays out expectations: Finish this activity, pick up these toys and you’ll get a surprise. 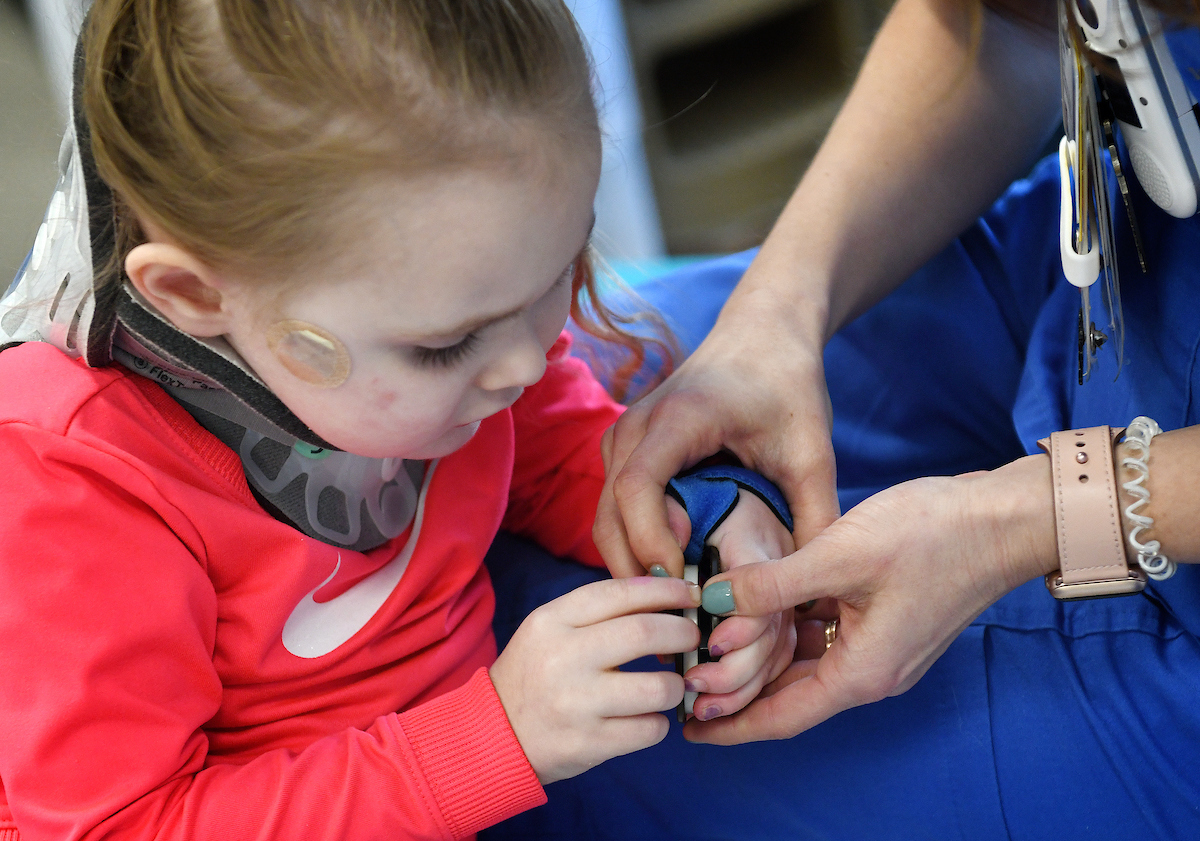 “With kids Bella’s age, you can be silly and playful and that works every time,” Kozlowski said. “When they get a little older, they’re less entertained by that.”

But still, she finds her work rewarding because it is patient-centered and individualized.

“We work on everything you have to do during the day – getting dressed, using the bathroom, taking a bath – all the basic stuff – but it’s not cookie cutter. You figure things out and make them work best for the patient. And I love being able to incorporate things kids love. If they love Sponge Bob, I can make every single activity about Sponge Bob. I just love the creativity.”

At home, Dana Whitaker says Bella is her outgoing child. The hospital setting has muted some of that personality, but her sass and spunk are apparent during her treatment.

“She has been so brave through all of it,” her mom said.

Bella is trying to pick up plastic cookie pieces with her left hand, match them with other pieces in her right hand, squeeze them together, then drop them in the cookie jar with her left hand. It’s hard work when your left hand doesn’t want to cooperate, but Kozlowski doesn’t let her give up.

“Lefty hand needs to clean up and I’m getting my surprise out of my pocket.”

The surprise is a tiny, sparkly bracelet that brings a smile to Bella’s face. But she doesn’t want to put it on yet, she just wants to hold it.

Just when she thinks the therapy session is over, Bella realizes she’s not off the hook yet. She reaches up for Kozlowski to lift her off the table, but the therapist has a better idea. “I’m not picking you up, you’re a big girl. Push your bootie onto the stool, I got you, now stand up tall.”

With a helping hand, Bella turns and sits down in her wheelchair. Kozlowski has another task for her: “Can you buckle your seatbelt for me please?”

It’s all about helping the little girl rediscover her ability to accomplish everyday tasks.

One thing she hasn’t forgotten is her manners. When Kozlowski asks her what she has to say to the photographer and writer who’ve been watching her therapy, she whispers “thank you.” Then, with a hint of the sass that she shows at home, she says to Kozlowski, “Told you I was gonna be famous.”