Dr. Andrew Jea’s likeness is traveling the world in the form of bobbleheads commissioned by a colleague as a birthday joke.

Far be it from Dr. Andrew Jea to get a big head. But a bobblehead? That’s a different story. 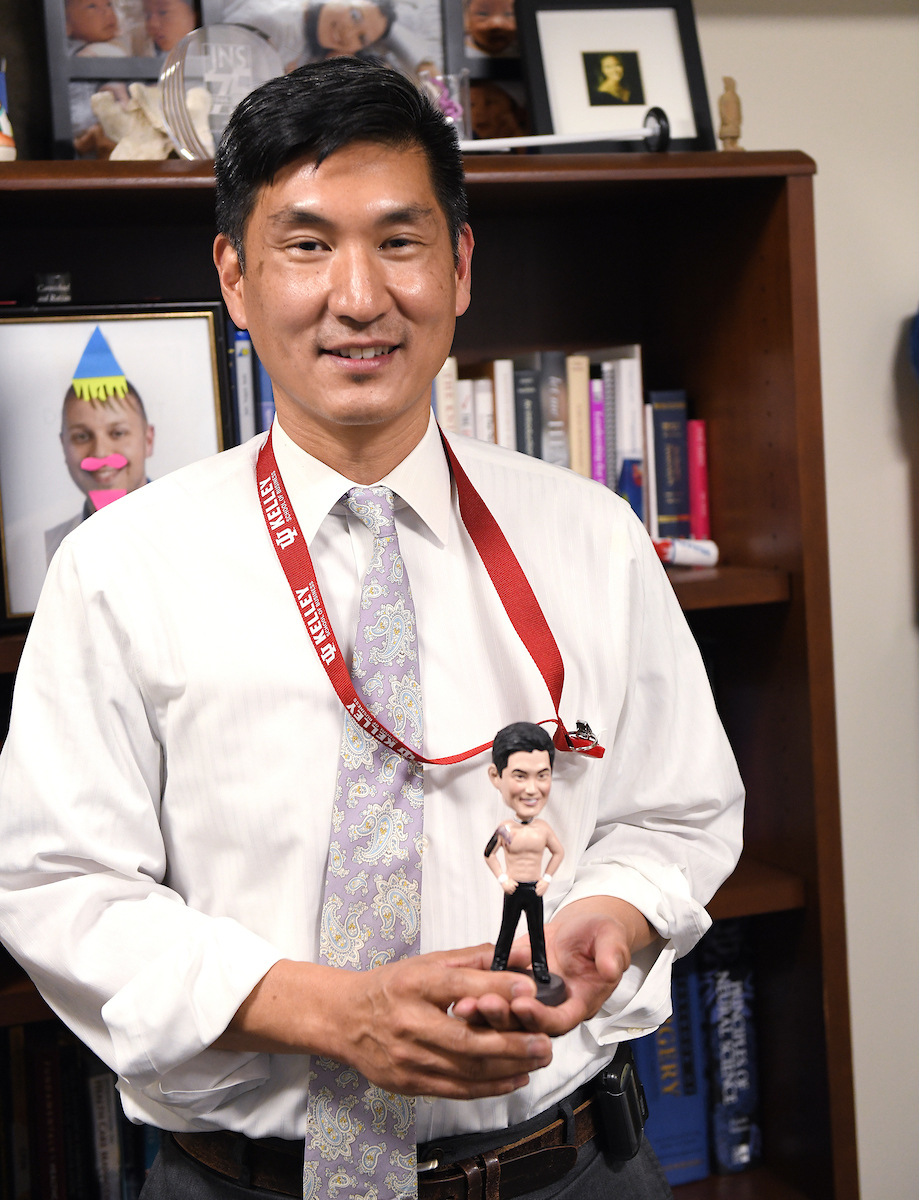 A miniature likeness of Dr. Jea, chief of pediatric neurosurgery at Riley Hospital for Children, has been popping up in exotic locales around the world, thanks to a practical joke played by neurosurgeon and colleague Dr. Jeffrey Raskin.

Deep-sea fishing off the coast of Guatemala? Check.

Visiting the Sphinx in Egypt? Check.

Looking out over the Great Wall of China? Posing on the cobbled streets of Antigua, Guatemala? Watching a hurling match from a front-row seat in Ireland?

Yep, been there, done that.

“We both like practical jokes,” Dr. Jea said. “We have a running contest to see who can outdo each other. He’s filled my office with balloons. I post-noted his entire office – wall to wall.” 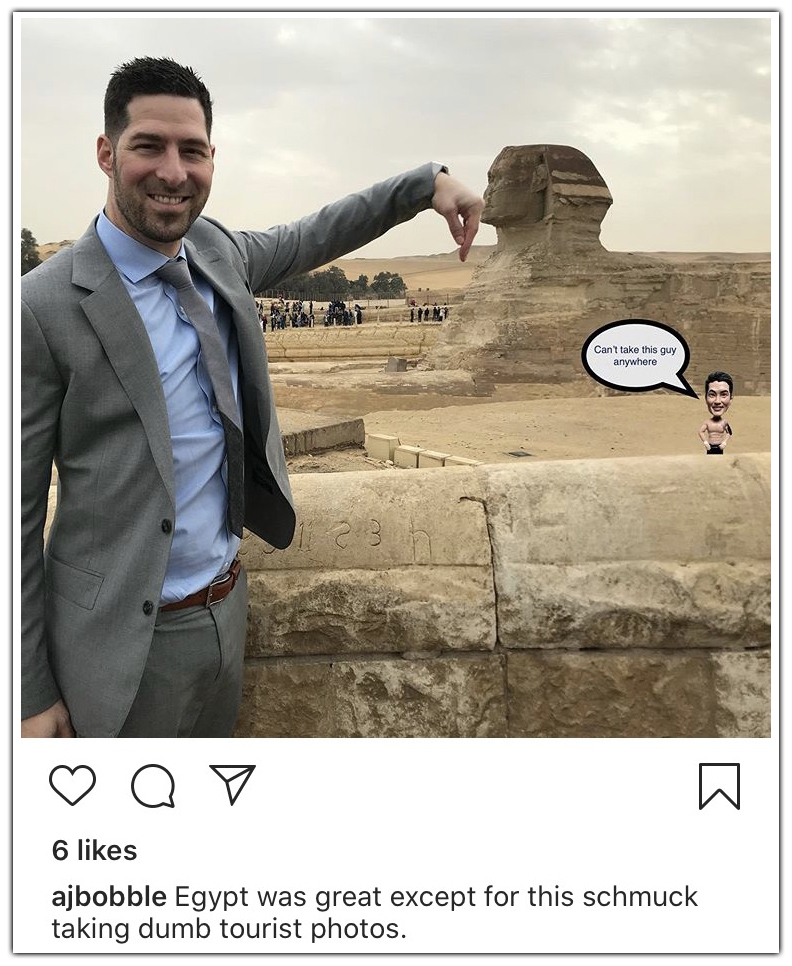 Last year, for Dr. Jea’s birthday, Dr. Raskin came up with the bobblehead idea, surprising his boss with the gift in front of the pediatric neurosurgery team.

But he didn’t stop at one. He ordered boxes and boxes of the tiny figures with their oversized bouncy heads and distributed them around the hospital.

And he did one better. He set up an Instagram account for his boss’ bobble. Follow along at AJBobble – “the official site for all Andrew Jea bobblehead adventures.”

The low-key Dr. Jea takes it in stride, noting, “I don’t even have an Instagram account, but my bobblehead has one.”

Dr. Raskin and others have taken the bobbles along on their journeys, playfully posing the chief in interesting settings. But Dr. Jea says he hasn’t taken it anywhere. He keeps one in his office but says “I think it would be egotistical of me if I walked around with my own bobblehead.” 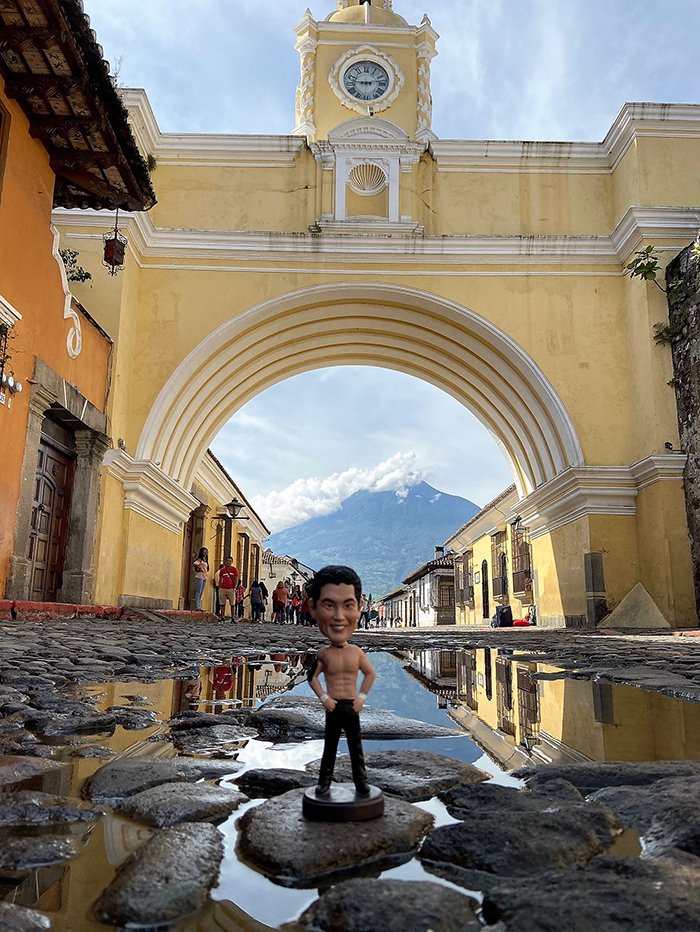 In case you think AJBobble is all play and no work, there’s also a “doctored” bobble wrapped in scrubs and a surgery cap.

There are more adventures ahead for AJBobble. After returning from Guatemala, his next trip will be to Utah, then Phoenix, Dr. Raskin said. And you can bet you’ll see his travels highlighted on Instagram.

If this sort of frivolity seems out of character for serious surgeons, Dr. Jea said it helps them stay sane.

“It keeps us humble and vulnerable, and this is what we need to be. As soon as we start to think we’re God’s gift to this Earth, we get into big trouble. Nobody wants to work with someone like that.”

AJBobble, for one, knows how to have fun.