In celebration of American Heart Month, we catch up with a 1-year-old cutie who received a new heart at Riley when she was 5 months old.

That explains the giggles, the grunts and the grins as the pigtailed toddler bounces balls, stacks cups, swings and pushes a toy car back and forth during outpatient physical therapy at an IU Health/Riley Hospital for Children facility on the Eastside.

And she’s doing all of this with a new heart. 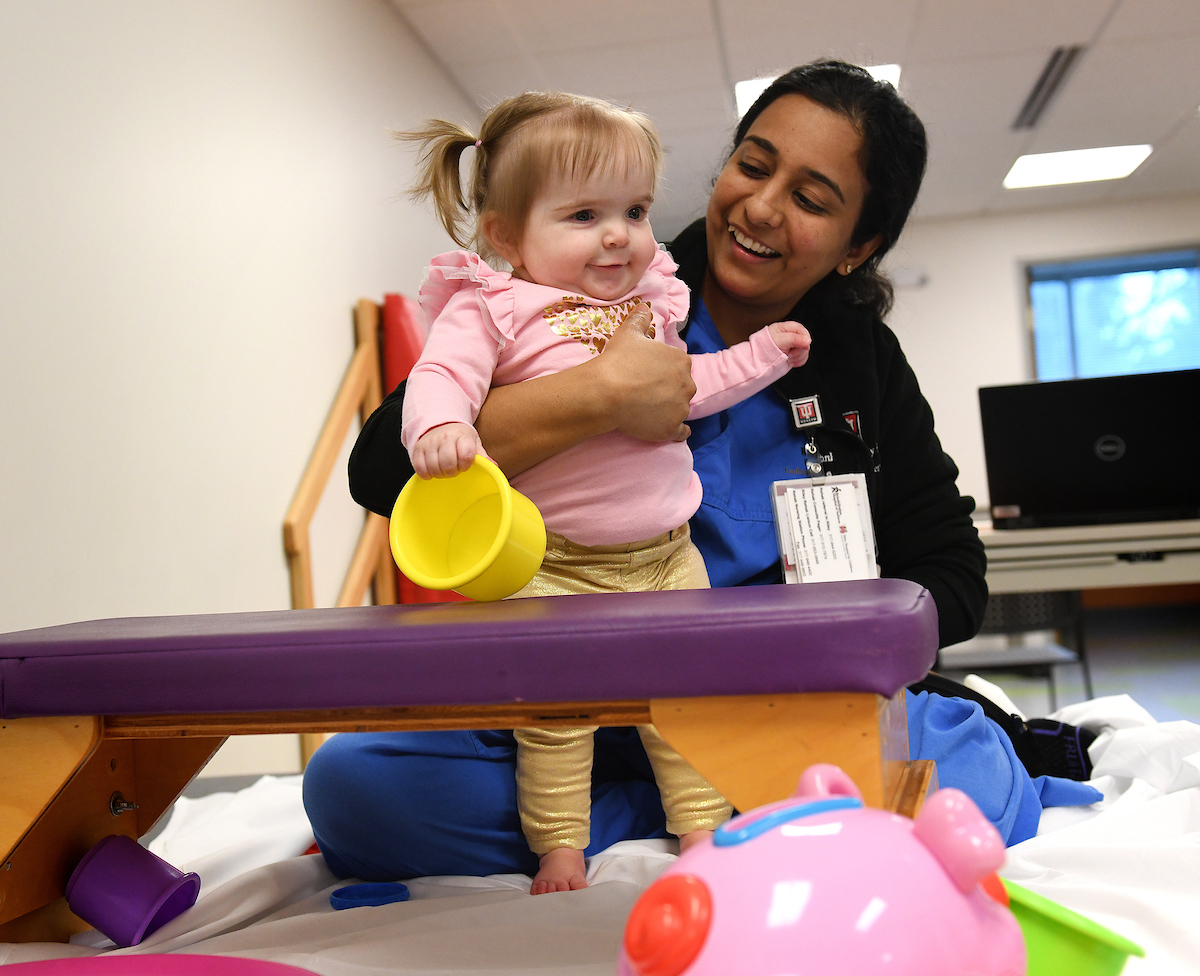 Sydney was a desperately ill little girl last year at this time. Born full-term Nov. 24, 2018 at a Northside hospital, doctors detected a heart murmur and she spent 11 days in the NICU. After determining that the murmur likely would resolve itself, she was released to go home.

But after two months of fussiness and digestive issues, the baby underwent an echocardiogram, followed days later by a heart catheterization at Riley that revealed her tiny heart was failing.

Genetic testing revealed that Sydney had Noonan syndrome, a disorder that can cause heart defects in addition to preventing normal development in various parts of the body. She also was diagnosed with cardiomyopathy and coronary stenosis.

She was soon admitted to Riley and added to the transplant list March 15. On May 6, Ashley and David Deaver got the call that a heart was available for their daughter.

“We both started balling our eyes out because at that point it was getting very close to her possibly not making it,” Ashley said in an earlier interview. “And every day was really hard because she was sedated and on so many medications.”

Dr. Mark Turrentine performed the transplant surgery May 7, just days before Mother’s Day. Sydney would recover for two months in the hospital before going home.

To look at her now you would never know the rough start she had in life. 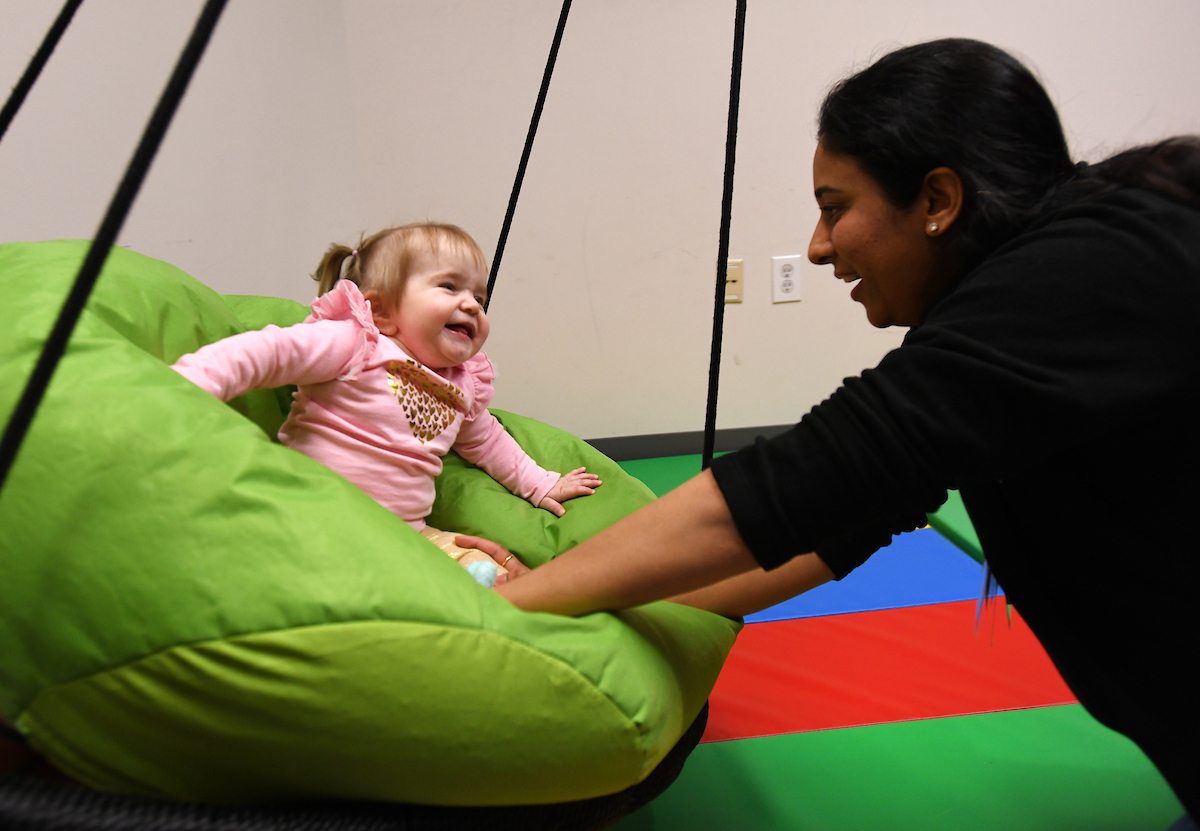 Sydney, who began working with Riley physical therapist Jaimini Khatri in July, does pretty much everything she is asked to do. And always with a smile.

When Khatri first saw Sydney in PT, she was not rolling, her visual tracking and head control were not good, and she would reach with only hand. She was stiff from the transplant and would not put weight on her hands.

For a few months, progress was incremental, but in October she began hitting more milestones like starting to roll and sitting up. In November she was up on her hands and knees, and in December, she was on a roll – literally.

“She was just ready to go,” Khatri said. “Rolling, pulling herself up to kneeling, army crawling and cruising sideways.”

As if to prove her point, Sydney is ready to climb off the therapy table to show off her walking skills while pushing a toy. But first, she takes a trip down the slide, squealing with delight as Khatri guides her down and Ashley waits for her at the bottom.

Decked out in shimmery gold pants and a pink top sprinkled with gold hearts, it’s obvious that she has stolen Khatri’s heart, but her biggest hugs and smiles are reserved for her mom, who spent so many stress-filled days and nights at Riley, wondering what her only child’s future might be.

“Looking back now, it seems so long ago in the scheme of everything that happened,” Ashley said. “When we left the hospital, she was on 15 medications and she’s now on six, so that’s a win.”

When she takes Sydney in for checkups, the team is always happy to see them, she said. And the feeling is mutual. At their Indianapolis home, the toddler has toys galore in the living room, now officially her space.

“It’s all Sydney wall to wall,” Ashley laughed. “She makes her rounds scooting and cruising around the furniture to the toy bin in the corner and she’ll throw everything out.”

Sydney, who gets physical therapy weekly at Riley’s Eastside location, as well as occupational and speech therapy at home, still has a feeding tube and needs improvement in her fine motor skills, but her progress has been remarkable, Khatri said, adding that the little girl can be an inspiration for future transplant patients.