“After the surgery, it was like she was born again”

Rare operation to remove half of a baby’s brain gives her a chance to live pain-free from the seizures that had crippled her since birth.

The seizures were unbearable – for the baby and her parents.

For the first 10 months of her life, Zahra Batool suffered painful, debilitating seizures as a result of a malformation in the right side of her brain. She was kept sedated to ease her pain, but her parents were desperate for something, anything to give their baby girl a chance at life. 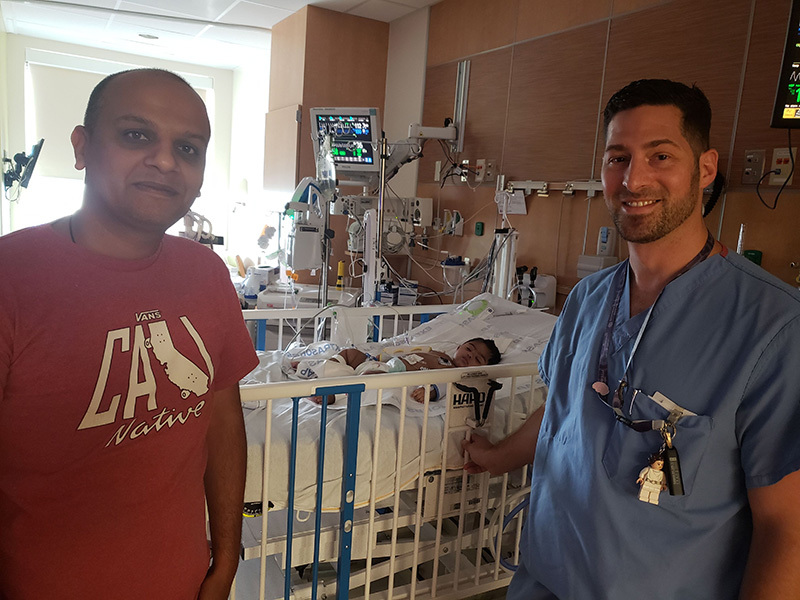 “You cannot see your child in pain,” said her father. “We were happy to have another baby girl in our family, but she remained sedated with all the medicine. Whenever she woke up, and we would see signs of seizure, she turned blue, and that was a really scary thing at that time. We thought she might not survive.”

Dr. Raskin and Riley neurologist Dr. Kelly Kremer gave Zahra’s parents what seemed like an impossible choice at the time: a rare surgical procedure to remove half of their baby’s brain – which could leave her paralyzed on one side of her body – or letting the seizures continue and risk them getting worse. 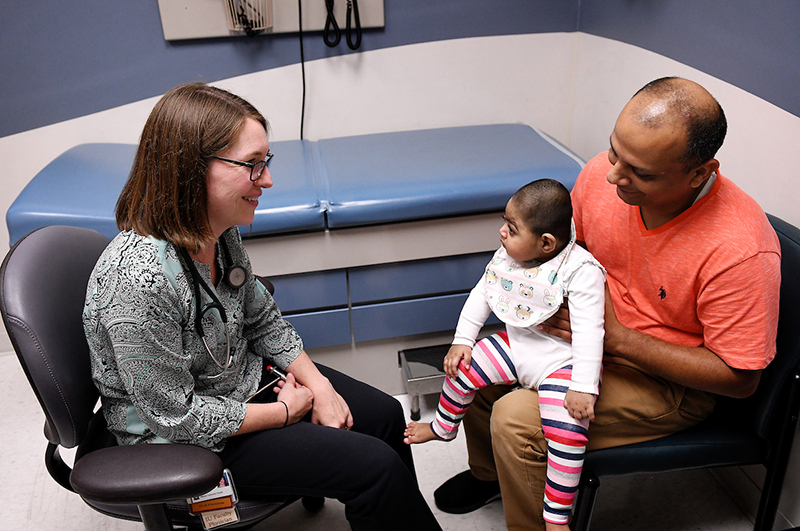 Called a hemispherectomy, the surgery allows for the removal of the part of the brain that is causing the seizure activity. In young children, the procedure is more successful because the brain can rewire itself to compensate for the missing piece, though there can be some impairment.

For Zahra’s parents, Waheed Chuahdary and Sumaira Bibi of Fort Wayne, watching their youngest child continue to suffer was not an option.

“We were really terrified, but she was in continuous pain since she was born,” her father said. “Every hour she was having more than 10 seizures, 10-40 seconds in duration.”

He can’t count the number of times they took her to the emergency room when her seizures became uncontrollable. 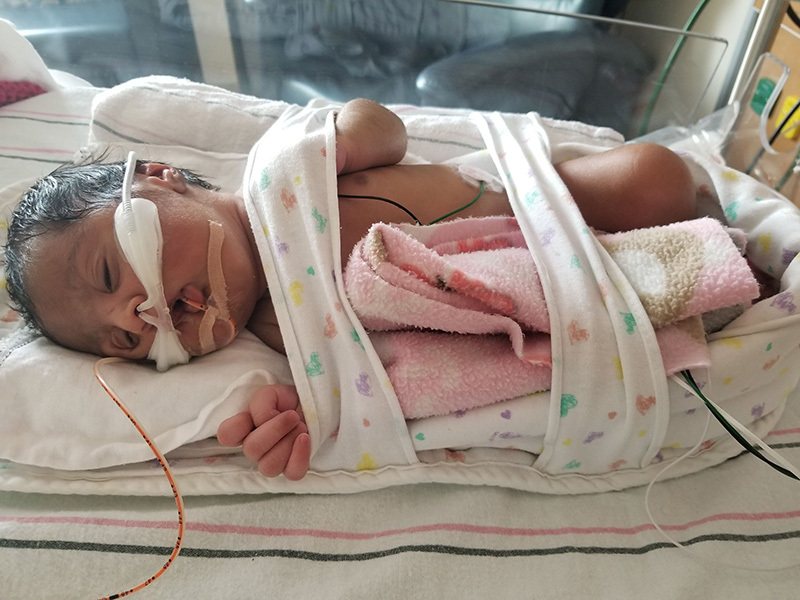 Zahra was born in December 2017 in Fort Wayne. Right away, doctors knew something was wrong. They arranged to have her transferred to Riley Hospital in Indianapolis, where she would remain for the first three months of her life.

Dr. Kremer worked with the child and her parents, trying to keep Zahra comfortable, while discussing treatment options.

“The medicines we were giving her weren’t really making a huge difference,” Dr. Kremer said, “so we talked when she was three or four months old about this surgery. But we had to wait until she was big enough since it’s such a big surgery.”

In October 2018, Dr. Raskin operated on the little girl, then 10 months old. He was more than a little anxious, he acknowledged.

“That’s the biggest, baddest open procedure that we have is to remove half the brain,” he said.

It was his first hemispherectomy as a pediatric neurosurgeon at Riley. Since then, he has performed one more.

“Epilepsy is a devastating condition,” he said. “Patients who have seizures despite taking medications should be seen by our comprehensive epilepsy center for an evaluation within a year of diagnosis, as best outcomes are achieved with early intervention.”

She smiles, she laughs, she kicks, and she cries.

Zahra, now 1½, looks out from the most gorgeous eyes – with the longest lashes – as her father holds her in an exam room at the Riley Outpatient Clinic.

As he talks, she listens, turning her head to look up at his face.

“It’s really a miracle,” he said, “especially because we were not seeing any improvement in her (before the surgery).”

Day and night, he and his wife had to watch their daughter closely because they never knew when a seizure would hit or how long it would last. 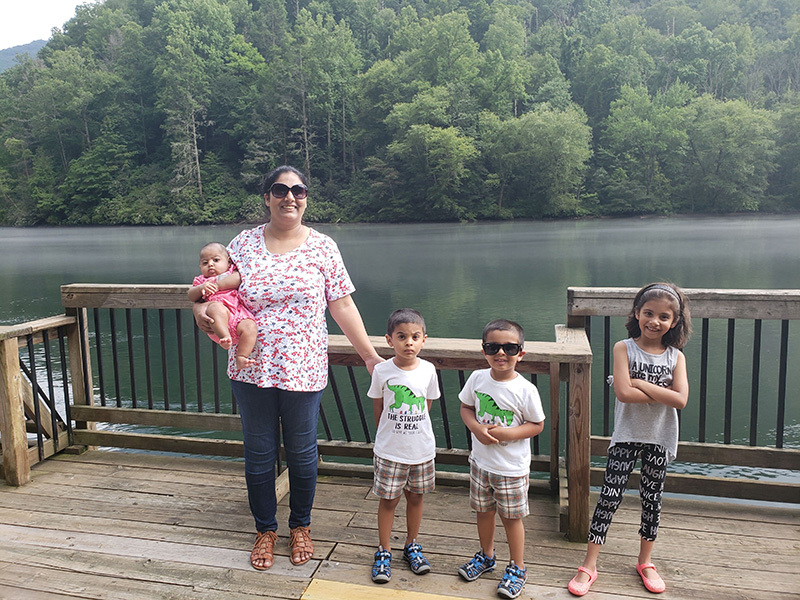 The surgery has changed everything. Zahra, the youngest of their four children, is moving both arms and legs, holding up her head, trying to stand with help and forming sounds with her mouth, if not words yet. She loves her siblings, and they dote on her at home.

She has not had a single seizure since the operation.

Zahra was the first patient to undergo the rare brain surgery at Riley in at least a decade, Dr. Kremer said.

“It’s not often that someone needs that procedure, but she’s a best-case scenario in that when you’re as young as she was, there’s much more potential (for the brain to rewire itself). You or I, if we had the same surgery, we wouldn’t have the ability to recover as well as she did.”

As the doctor talks, Zahra laughs and kicks the wall repeatedly, trying out her leg strength.

It’s too soon to tell how well she will recover, but her family and her doctors are thrilled to see the progress she has made so far.

“We think she should be able to develop language, but it will take longer and her continuing to work with therapists,” Dr. Kremer said. “She’s obviously much more social and engaging.”

For Waheed, the difference is already profound.

“I’m really thankful to these guys – Dr. Kramer, Dr. Raskin, all of the Riley team who supported us. After the surgery, it was like she was born again.”

Dr. Raskin is hopeful that his young patient continues to make significant functional gains over time. For now, he said, she is thriving. She is being weaned off her medications so she can be more alert and make normal brain connections.

“She also has a very loving and doting family who support her and take exceptional care of her.”