After 100 days, teen who defied the odds leaves Riley

Mother of 13-year-old who barely survived a bout with the flu amid severe complications recalls how it started: “All I could do was hold his head back to keep his airway open and beg him to keep breathing.”

Juanita Roy swore she wasn’t going to cry the day her son was released from the hospital.

Good luck with that, her husband told her.

Sure enough, the tears started flowing all around as she and Josh Roy watched their 13-year-old son, Josh Jr., walk down the hall of the pediatric intensive care unit at Riley Hospital for Children. 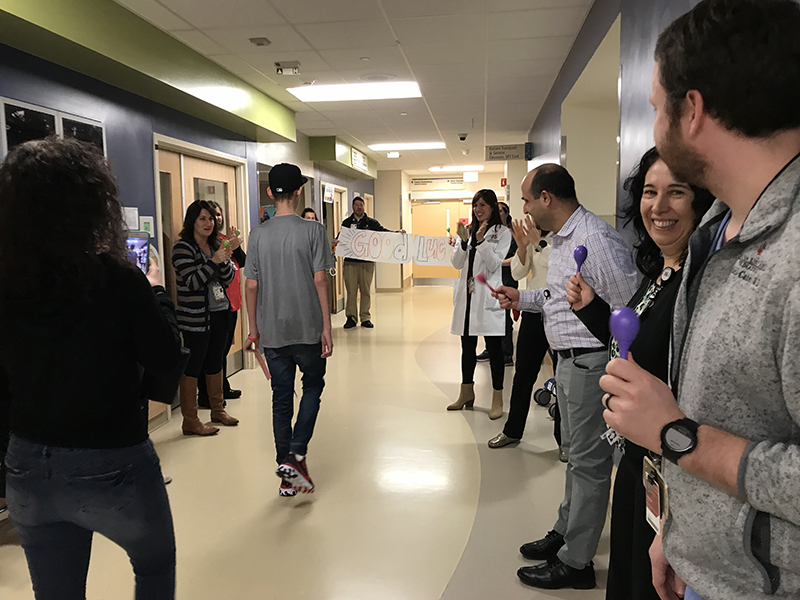 He wasn’t alone. Dozens of nurses, physicians and other clinicians lined the hallway, cheering, clapping and shaking maracas as they were witness to what many believe was a miracle.

That Josh would walk out of the hospital on his own power was beyond what they had allowed themselves to hope for. Many of these same people who came to wish him well had never seen Josh walk at all. He had been lying in a hospital bed for months while a team of experts tried desperately to keep him alive.

Yet here he was, standing tall – all 6 feet of him – ringing the bell that signifies the end of his treatment and devouring a doughnut for the first time in months.

A sweet moment in so many ways.

The teen was rushed to an Anderson hospital from his home in Summitville on Oct. 13 after losing consciousness at home, his parents said. He’d had what they thought was strep throat for a couple days.

But that day would be the beginning of a surreal time in their lives, a time when Riley would become their home base and grandparents would step in to care for their three younger children. Josh Sr. remembers how quickly things changed.

“In 10 minutes, he went from talking to unresponsive.”

Josh only remembers feeling “super light-headed,” before everything went dark.

As they waited for the ambulance, time seemed to stand still.

“All I could do was hold his head back to keep his airway open and beg him to keep breathing,” Juanita said of her eldest child.

Anderson health providers quickly realized the boy, diagnosed with the flu, needed much more acute care than they could provide. He was intubated to help him breathe and was flown via IU Health LifeLine to Riley, where he would become septic, suffer kidney failure and multiple seizures and require life support in the form of ECMO (extracorporeal membrane oxygenation) for 54 days. No sooner had he overcome one complication, another would set in.

“I love the PICU people, they were absolutely wonderful,” Juanita said before stepping out onto the unit with Josh for the last time. “They treated him with so much dignity and respect. They saved him.”

As she was being wrapped up in hugs by multiple nurses and physicians, she clutched a note she wrote to the team to thank them for saving her son. Josh Jr., wearing a New England Patriots shirt (for which he took a lot of good-natured ribbing), stood beside her and his dad, a little overwhelmed by all of the attention.

On her darkest days, Juanita said, she would stand for hours at her son’s bedside and rub his curly mop of hair, lost in thought and prayer.

Asked if she allowed herself to think about this day, the day Josh would be able to go home, she nodded. “Yeah, he’s strong, but it wasn’t promised. He defied the odds. We were expecting to come home with a vent, trach, a feeding tube and on dialysis. And he’s like, no, not doing it.”

Instead, Josh has just a brace on one foot to fix a droopy ankle that suffered some nerve damage.

That and the scars he still carries. One from the tracheostomy is still visible in his throat. Next to that is another reminder from the neck catheter used to support dialysis when his kidneys started failing. Not seen are the multiple other scars from chest tubes, feeding tubes and IV lines used to save his life.

PICU nurse Kearstin Deno was there to greet Josh on Tuesday, his 100th day, just as she was there to admit him to Riley three months earlier. She took care of him from Day 1.

“He had a lot of fight,” she said. “All the odds were stacked against him and he just pulled through. It’s a true testament to what anybody can do here.” 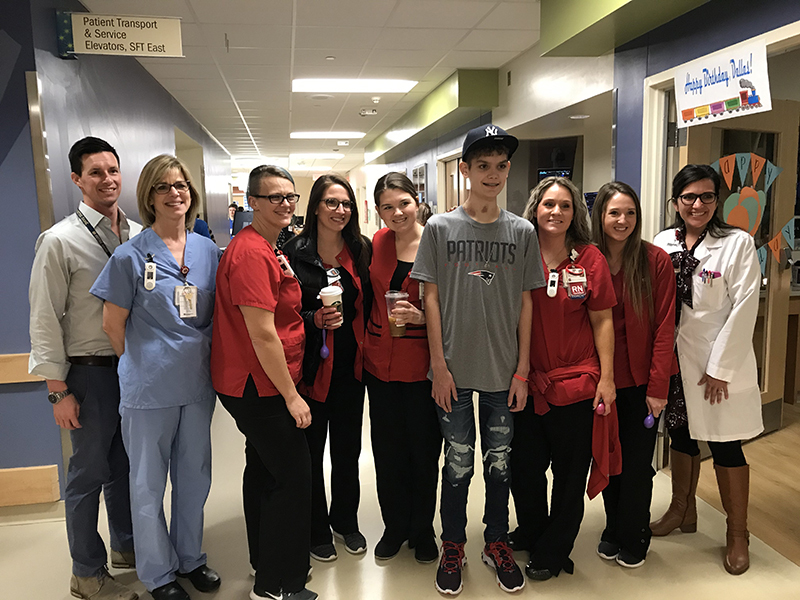 Later, after the celebration had ended, after the family had gone home and Deno had returned to take care of other patients, she said this: “I hope you got a glimpse of the impact JR had on our unit. I know this roller coaster of events affected their family, but they impacted us all more than anyone could ever understand and me personally as a newer nurse.

“Days like today remind us all why we do it,” she added. “The fight and willpower of that kid is what truly brought him to where he is today. I’m so proud to have gotten to know him and his family; they deserve the world!”

As Josh and his parents handed out #JoshStrong bracelets that included his ECMO number (1023) to those gathered, Dr. Brian Gray, surgical director of ECMO, recalled the challenges they faced in adapting Josh’s care over time.

“Josh is someone who required more tender loving care from an ECMO standpoint that most of our patients, Dr. Gray said. “He had a lot of bumps on the road that meant that our team needed to change what we were doing to optimize it for him.”

But every time they took Josh into the operating room for another procedure, they met with his parents to explain the challenges they faced.

“It was just heartbreaking because you knew they were so invested and they care so much for him,” Dr. Gray said.

On this day, however, he was celebrating along with them. “I’m so happy for his family. They’ve been fighting for him the whole time.”

As the crowd thinned out and the family prepared to leave, Josh reminded his mother that he is looking forward to a trip to the grocery store and a meal of steak, crab and lobster for dinner. He lost 40 pounds in the hospital and is ready to enjoy home-cooked meals again.

Aside from food, the only thing on his mind is sleep.

That’s fine with his mom, who joked that she wants to ground him until he’s about 30 – just to keep him safe.

“He’s not allowed to get even a snotty nose.”