Little Paco Myles wasn’t acting like himself. The giggles and the feistiness had been replaced -- by a different Paco.

Brandi Myles couldn’t put her finger on it. But, she had an uneasy feeling – one of those motherly, gut instincts.

“I knew there was something,” she says. “I just didn’t know what.”

And then a year ago, Paco’s stomach became bloated – really bloated. He’d been constipated for days. Brandi took him to the emergency room at Riley Hospital for Children at IU Health.

“Paco is going to need to stay overnight,” a doctor told her. Then, that doctor asked a nurse to make a call: “See if they have a bed open in 5 West,” he said 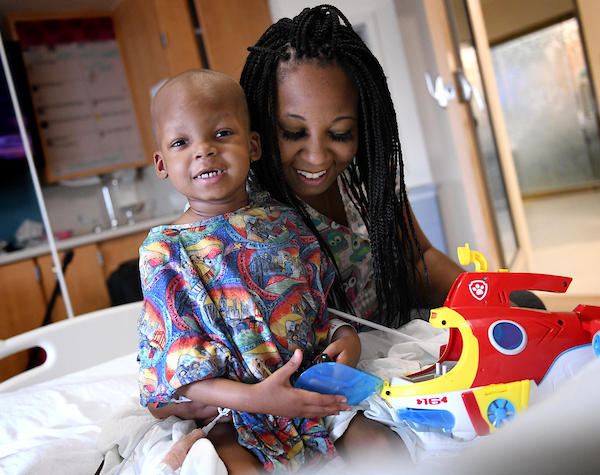 She knew 5 West. That was the unit she had worked on at Riley as a nurse’s assistant just months before.

She knew 5 West. Her precious, sweet Paco had cancer.

As she worked on 5 West in 2016, Brandi had gotten to know those brave kids and their families.

She saw firsthand the roller coaster of cancer. She knew the struggles and the lingo. But she didn’t know neuroblastoma. She’d never heard of it.

Neuroblastoma is a rare form of childhood cancer and, often, a deadly one, causing 15 percent of all cancer deaths in children.

For Paco, his neuroblastoma had settled in his stomach -- three tumors, each a tangle of overgrown nerves.

His diagnosis came on a Friday last July. By the following Monday, he had started chemotherapy. 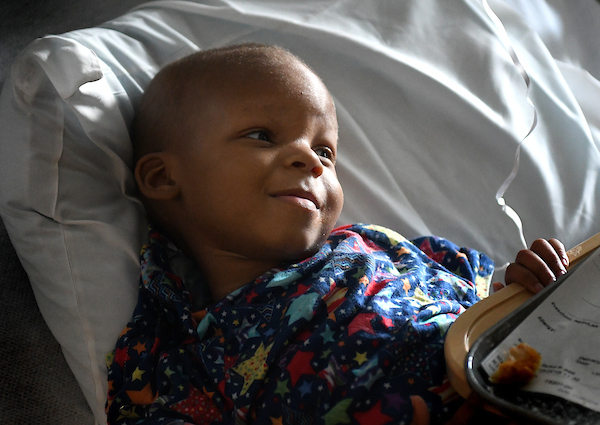 Paco went through three rounds of chemo – which got rid of two of his tumors. The week before Halloween, he had surgery to remove the remaining tumor on his left adrenal gland. Surgeons told Brandi they got 100 percent of that tumor.

Then, Paco had two more rounds of chemo.

He was able to go home – and take a trip to Disney World. But by December, the day after Christmas, he was back at Riley for a stem cell transplant and more than a month stay at Riley. In April, he had a second stem cell transplant, then six rounds of radiation.

“It’s hard, but it’s worth it,” Brandi says. “Paco never once complained and, if he doesn’t, why should I?”

No, Paco doesn’t complain. Paco smiles. And he thinks of others. He’s incredibly polite. And he’s stolen the hearts of everyone at Riley.

As he sat in his hospital bed Wednesday afternoon, Paco thanked a photographer for taking his picture. Paco asked if he could take one of him.

He ate his chicken tenders and fries – his favorite meal – to make him strong. He played with the toy food, cutting up carrots and stirring his eggplant.

He talked about how he was looking forward to the Indiana State Fair next month, the elephant ears and rides with his three older brothers, Jaion, 4, William, 10, and Brandin, 15.

Paco’s legal given name is Jaicion. He says he wants people to know that. And then he gives a fabulous smile and says, ‘Whoop, there it is.”

The room erupts in laughter. Paco has a solid support system. With him on this day is his mom and big brother, Brandin, his great uncle and aunt, Carl and Rae Harris, and cousins Breanna and Sam Harris.

A nurse walks in and asks Paco to give a thumbs up. That’s his sign. When he felt just awful during his treatments and couldn’t talk, Brandi would ask Paco to give her thumbs up if he felt OK and thumbs down if he didn’t.

Brandi can’t believe her baby boy has grown up in the hospital, a full year of treatments. “He has matured so much,” she says.

Right now, Paco is in his final portion of treatment, getting immunotherapy. The goal is to be finished by October.

And then, Paco can be home for good, to do all the things he loves. Celebrate his 4th birthday in November, watch YouTube videos, play “PJ Masks” and, hopefully, leave neuroblastoma behind.

Cancer can impact even the youngest of us. According to the U.S. National Library of Medicine,...