The family never could have imagined a year ago as the season started that it would be Conner West’s last time playing football at Huntington North.

The first time it happened was before a weightlifting session. Coach Rick Burnau got a text from Conner West. Could he come?

Conner was too weak from the leukemia and the chemo to lift weights.

“But would it be OK, coach, if I come just to hang out with the team while they lift?”

It tugged at Burnau’s heart that Conner -- a senior defensive end for his Huntington North High School football team -- was asking to come to a workout.

“You don’t have to ask,” Burnau told Conner. “You’re part of this team.”

Conner was diagnosed with acute lymphoblastic leukemia Nov. 30. His life is now about hospitals and chemo and bone marrow.

As Huntington North started school and football practice this week, Conner was at Riley Hospital for Children at IU Health with chemo pumping into his body.

His football team has done everything to include him, everything that’s possible, anything they can think of. They sold T-shirts the other night and gave the money to Conner’s family.

Burnau sent Conner designs for the team’s new away jerseys to get his opinion.

“It’s put life in perspective for them. That’s the key,” Burnau says. “I tell them, ‘You might be hot. You might be tired. But you have a brother who is still fighting harder than you are today.’”

It’s put life in perspective for Burnau, too.

Conner won’t get to play that game again. Not for the Huntington North Vikings. His mom, Lynda Wall, is hoping he gets home to see a few games. Most importantly, she hopes he gets to be on the field for senior night at the end of September.

The family never could have imagined a year ago as football season started, and then ended, that it would be Conner’s last time playing football at Huntington North.

But then the headaches started. The nagging headaches and fatigue. Conner felt tired.

But, Wall says, "nothing major." Nothing, the family thought, to raise any medical red flags. They assumed Conner had a virus. 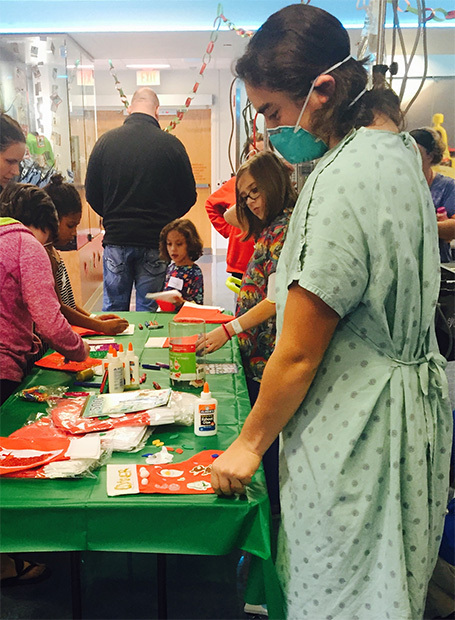 Blood tests on Nov. 30 revealed something much worse. Conner was sent that night to Riley. The chemo, the spinal taps, the pills began.

Six days later, Conner stood inside Riley at a Christmas party in the Child Life Zone. Former Indianapolis Colts player Gary Brackett was there to hang out with the kids.

Brackett has a brother who died of leukemia. He talked to Conner, but not about that.

He put his hand on Conner’s shoulder and talked about football. A slight smile spread across Conner’s face.

The journey has been tough -- football player tough.

This week, Conner was in the hospital bed with his MacBook doing schoolwork, getting chemo. He has kept up with his schooling tremendously well and is expected to graduate with honors in the spring.

This week, Conner was recovering from a bone marrow transplant. His donor was big brother, Jordan. In between Jordan, 20, and Conner is 18-year-old Trevor. 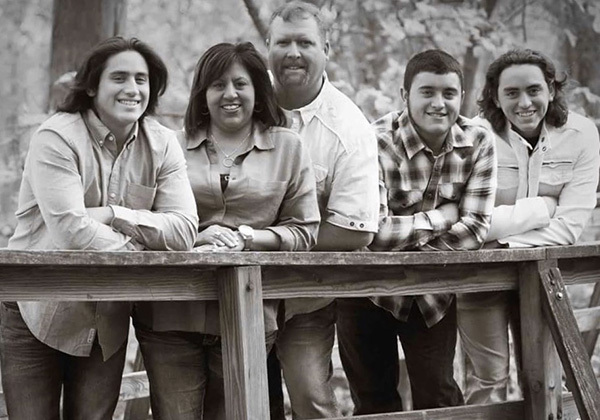 Both were tested. Jordan was a perfect match, hitting all 10 of the 10 criteria looked at for bone marrow donors. Trevor wasn’t a match.

“Trevor was bummed he couldn’t,” Wall says. Which speaks volumes about these brothers. Being a bone marrow donor isn’t easy. It’s painful.

“He’s my baby brother,” Jordan says, “and I would do anything in the world for him.”

Conner doesn’t say much as he lies in that bed, until the topic of his brothers arise. Growing up, Conner remembers wrestling. And fighting. Not mean, physical fighting. Jab fighting with words, he says.

Jordan remembers the brothers, just little guys, sitting in their dad’s semi trucks and acting like they were driving.

“And playing football, seeing who would get hurt first,” Jordan says.

The football. It’s always been there.

But it’s not football that Conner misses most. What this disease has taken from him is much more than football.

It’s taken his usual teenage life. The 4-H, the baseball and basketball leagues. Being at home with his 3-year-old German Shepherd Shadow. And his friends.

“(I miss) hanging out with people,” Conner says.

Before he left Huntington for the transplant, Conner had a bunch of friends over. Just to chill. It was awesome. 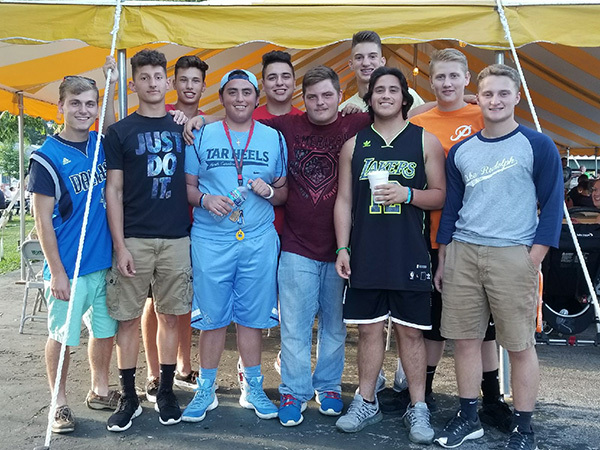 The night before he came to Riley for the transplant, Conner hung out at the fairgrounds.

He’s shown lambs and pigs and, most recently, heifers. He didn’t get to do that this summer.

People are always asking Conner what he wants to do after he graduates. Where he wants to go to college. Will he play football?

Conner doesn’t know. Trevor is heading off to college this week to play football at a newly-created program at Indiana Wesleyan University. Maybe he could do that.

Right now, Conner is focusing on today. He’s getting his homework done. He’s texting friends. He’s thinking about what wish he’d like to receive from the Make-A-Wish Foundation.

He’s pretty sure he’s settled on what that will be – go to a Tampa Bay Buccaneers game, his favorite NFL team, and meet quarterback Jameis Winston.

There’s not one person who wouldn’t love to see that happen for Conner, including his doctor David C. Delgado, M.D., who specializes in hematology and oncology at Riley. He says Conner is a model patient, “polite and kind and quiet,” but still lets the medical team know how he is doing so they can best help him.

"Conner's definitely working hard to make it through this difficult treatment,” Dr. Delgado says. "I haven't seen or heard him complain despite this challenging time."

Perhaps, it was football that prepared Conner for this vicious opponent called leukemia. It taught him to be tough, no complaints and do what it takes to win.

“When you think of a kid you want to coach,” Burnau says, “it is Conner West. Just an amazing kid."