It sounds like a horror movie, but flesh-eating disease is real, and it required aggressive treatment by a Riley team to save a young girl’s life and her leg.

It was supposed to be a wonderful getaway, a chance to soak up the sun and sand on the beach in Florida.

But for Michelle Brown and her family, the vacation to Destin three weeks ago turned terrifying after a scrape on her 12-year-old daughter’s big toe morphed into a life-threatening infection.

Necrotizing fasciitis – more commonly known as flesh-eating disease – can be deadly. It starts suddenly and progresses rapidly, eating deep into a person’s soft tissue. More than a fourth of people who contract the disease die; many more lose limbs. 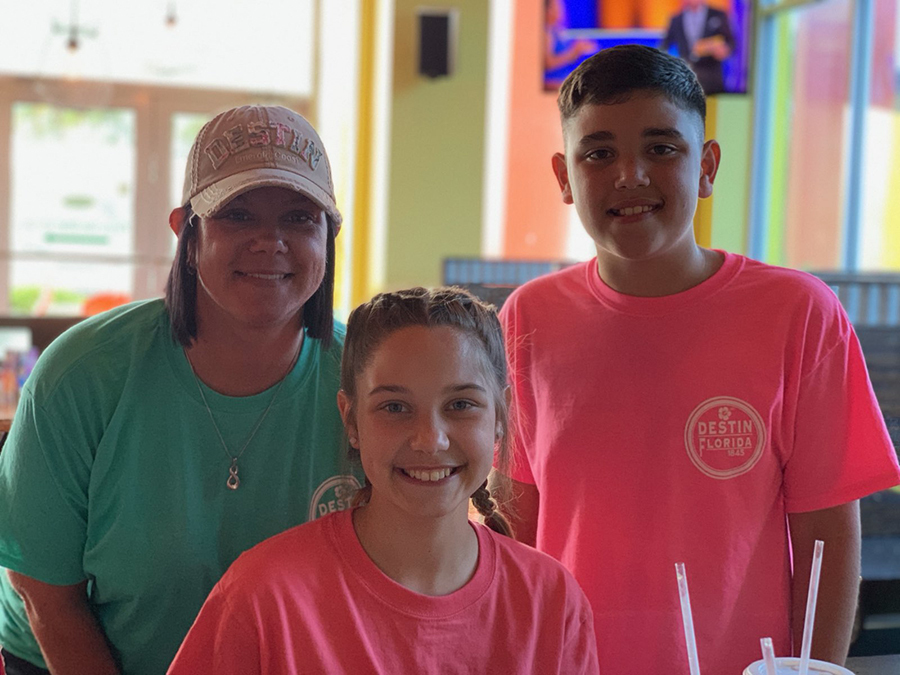 Brown and her daughter, Kylei Parker, didn’t know any of this when they arrived in Florida on June 7. They were vacationing with Kylei’s younger brother, as well as Brown’s sister and her family. After two days of rain, they ventured out to the hotel pool and then the beach, where they splashed in ankle-deep water. The storms had stirred up the sea and kicked up big waves, so no one was allowed to venture too far into the water. Still, they had fun.

Kylei woke up with pain in her calf the next day. They thought it could have been a muscle cramp, but by the following day the pain was worse and Kylei could walk only on her toes. Perhaps it was a pulled muscle, her mom thought.

Brown made an appointment with Kylei’s pediatrician as they began their long drive home to Mooresville on Wednesday, June 12. By the time they arrived at the doctor’s office the next day, Kylei’s pain had intensified. Her pediatrician, worried that it would take too long to get specialists in to see her, told Brown to take her daughter to Riley Hospital for Children immediately.

In a Facebook post she wrote after the worst of the ordeal, Brown explained some of what happened over the next few hours.

“After leaving the doctor’s office, she starting developing a rash on her body. We got to Riley at about 2 p.m. After arriving and inspecting her leg, it had swelled a lot, was red, had a red line running down her calf and was warm to the touch. She had a fever when we arrived at the Riley ER of 99.9.  About a half an hour later it had already risen to 103,” she wrote.

“Everything started going downhill quickly. … She had contracted a bacteria somehow that had already turned into infection. It was an aggressive infection and has already spread up her leg to her thigh. Her blood pressure was in critical numbers and her heart rate was very high. They had four IVs in and (were) pumping fluids aggressively by machine and by hand simultaneously. She was admitted and put in (intensive care).” 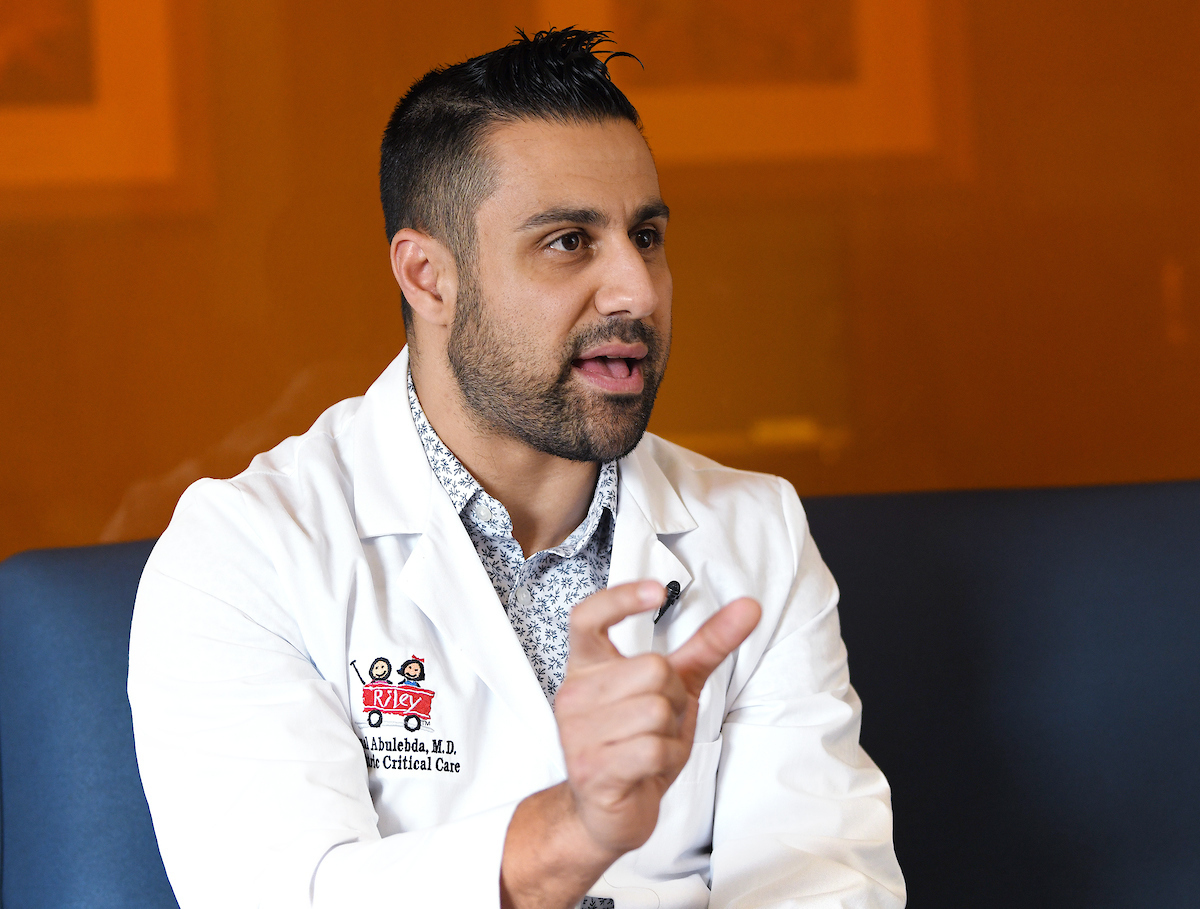 Dr. Kamal Abulebda, who was on duty that day in Riley’s pediatric ICU, said Kylei was very sick when she arrived in the PICU. “Clearly she had an infection and septic shock. She had a lot of swelling and redness in her leg, so we were quite concerned that she had extensive infection there,” he said.

An ultrasound in the emergency department had revealed no blood clot, but Kylei’s condition in intensive care was spiraling.

Ongoing sepsis can cause multi-organ failure, he said, so while they treated the infection with antibiotics, they also had to support her vital organs with fluids and inotropic medications.

It was a race against time.

Necrotizing fasciitis progresses very rapidly. The tissue death must be addressed urgently, while at the same time keeping the patient’s heart rate and blood pressure stable.

Dr. Abulebda said he can count on one hand the number of cases of necrotizing fasciitis the hospital sees each year. He treated another little boy last year with the disease whose life was saved but who lost the lower part of one leg.

It’s hard to predict who will get the deadly infection. Kylei was a previously healthy girl with no obvious risk factors, he said. “This came out of nowhere.”

But parents can help protect their children by making sure any skin wounds are properly treated and by avoiding water until cuts, scrapes or even bruises are healed. The skin acts as a barrier for infection, he said. When it is weakened in any way, it is easier for bacteria to enter.

An orthopedic surgeon drained and removed the deep tissue infection in Kylei’s right leg within a few hours of being admitted to Riley. She would have two more surgeries before she was released a week later, but the quick response from her medical team saved her life and her limbs, her mom said.

“Her medical staff, the emergency room staff, everyone was absolutely amazing,” Brown said by phone after her daughter was released from Riley. “They worked very aggressively to save her life, and I’m very, very fortunate.”

In those agonizing early days in the hospital, there were dark moments when she thought she might lose her daughter, Brown said. But she took comfort in the care Kylei received.

“A doctor would order something to be done and I felt like there was never a wait. It was done immediately the whole time we were there. I feel that played a huge part in her survival. So many people I’ve been in contact with have known somebody who was not as fortunate as us. People have died from this or have had amputations.” 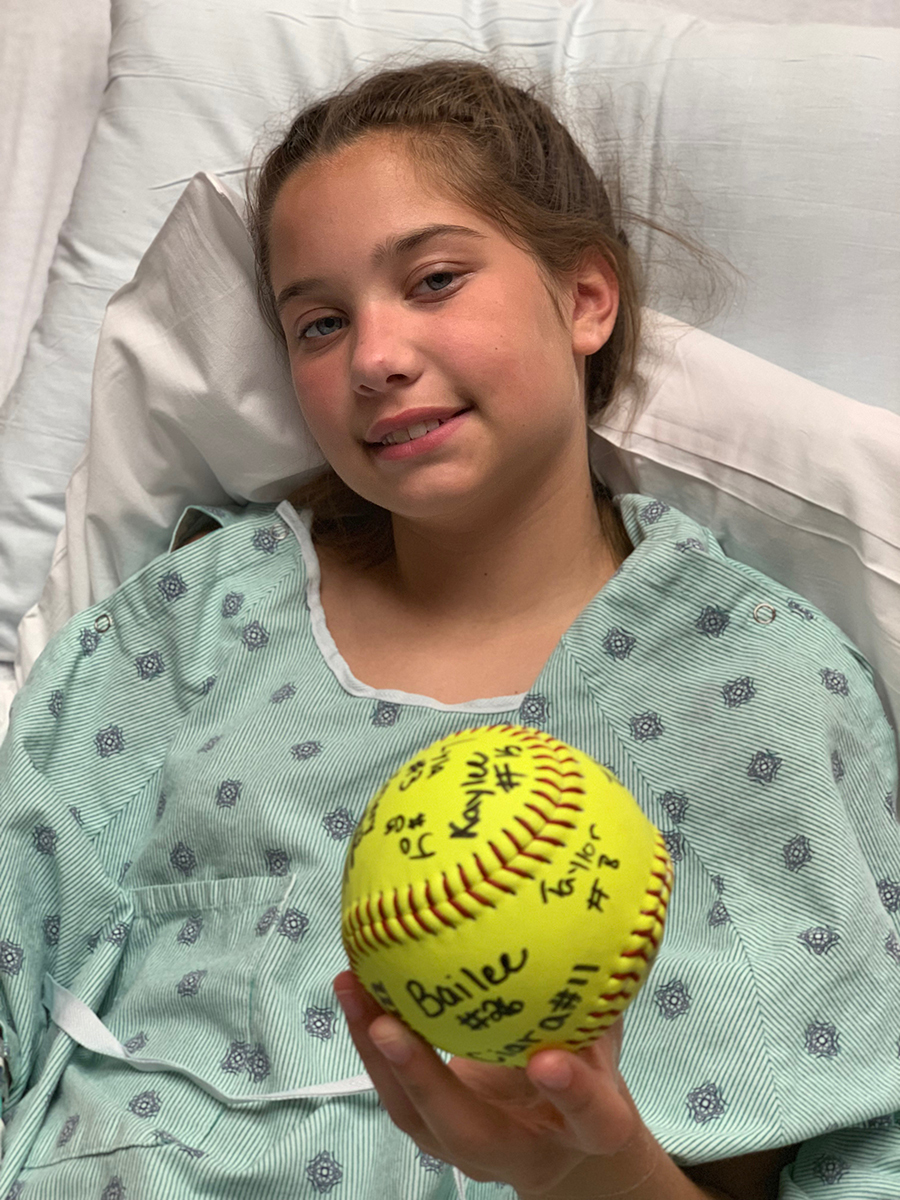 Once she was stabilized and the infected leg was treated, Kylei benefited from visits with friends and family members at the hospital. They included her softball coach and members of her team, the Queen Bees. The week Kylei was hospitalized was the team’s tournament, and they dedicated it to her, presenting the second-baseman with a game ball signed by the team.

Still weakened by her ordeal, Kylei is home now, getting around with a walker and a wheelchair. She will start physical therapy soon and hopes to be back on her feet by the start of school in August. She will be a seventh-grader at Monrovia Middle School.

“I am just so thankful for the many prayers, the quick response and efforts of her medical teams and the aggressive treatment she has received,” Brown said. “Because of that, I still have my baby girl with me today.”

Kylei is “a lucky girl,” Dr. Abulebda said. Prompt recognition and early and immediate intervention by the Riley team saved her and her leg. Now that she has survived the acute infection, her prognosis is good.

But for other parents who might worry that this could happen to their child, he advises taking common-sense precautions.

“Bacteria lives in the air and on our skin but doesn’t cause trouble unless there is an opening that allows it to get into the bloodstream,” he said.

Even then, it doesn’t necessarily result in necrotizing fasciitis as it did in this case.

But redness, swelling and lack of mobility are early warning signs that something is amiss and prompt medical care is critical.