She would stand there hunkered over his crib, singing lullabies, singing silly songs, soothing him with her coos.

She would lie back in a chair with him nestled on her chest, reading the same books over and over to him, “Goodnight Moon” and “Room on the Broom.”

Alexis McGraw would not leave the hospital. She couldn’t bear the thought of her tiny baby boy, Jaden, being there without her. It was tough to convince her to even leave his room.

She could have left and, really, no one would have blamed her. People would have understood. Alexis was just a teen when her twin boys were born July 5 at 23 weeks gestation and given slim chances of survival. 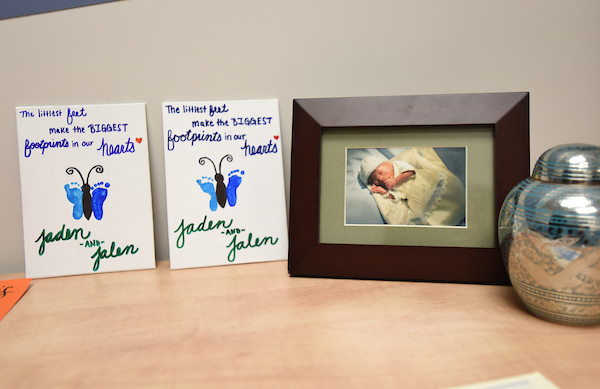 She was crushed when her first-born twin, Jalen, died just days after his birth. And she was left grieving with that surviving baby, Jaden, who weighed just 17 ounces, hanging on to life by a thread.

It was overwhelming. It was emotional. It was intense.

And as a teen, McGraw could have said that it was just too much. She could have headed back to school for her senior year of classes. She didn’t.

She could have taken breaks from the more than five months Jaden was in the hospital, to go out for ice cream with friends or to a movie. She didn’t.

Alexis stayed there at his bedside every second. Praying. Singing. Reading.

And the doctors and nurses at Riley Hospital for Children at IU Health say that ‘Jaden the miracle baby’ is here because of that – because of the unwavering devotion of his selfless teen mother.

Of all the mothers that Linda Fellers has happened upon in her 25 years as a nurse in the neonatal intensive care unit at Riley, Alexis struck her. What a special young woman to already have the maturity to give everything she had to her son. 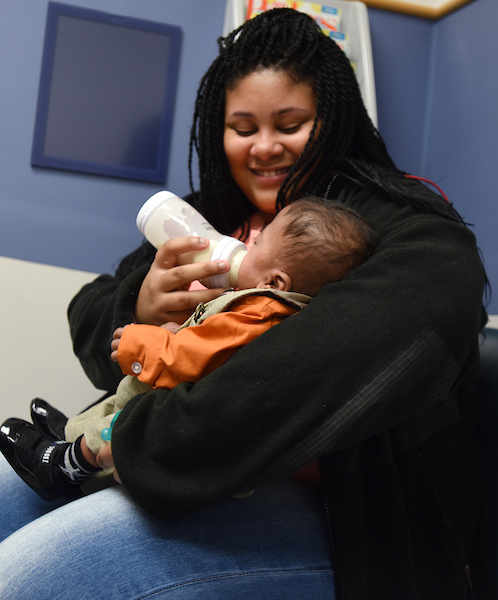 “As a teenage mother she could have gone on with her life as she knew it,” Fellers said. “But she stopped her life she knew and devoted it to Jaden. Few parents have touched me like Alexis.”

Inside Riley on Thursday morning, Alexis sits in a chair holding Jaden on her lap. She’s back to reunite her son, now seven months old and 9 pounds, 9 ounces, with the Riley team that saved his life.

She doesn’t really understand the accolades being poured on her for her commitment to her son. After all, she never thought of doing anything else. Her heart said this was the only option.

“It was hard because I wanted to go to school so bad,” said Alexis, now 18 and finishing her senior year of high school online. “But I didn’t want to leave my child’s side.”

That was hard for Dr. Markel. As a surgeon, he is trained to be able to fix things. But he had done all he could to fix Jaden at that point.

“There wasn’t anything else I could do,” he said. “We just had to leave it up to fate or faith.”

During most of the pregnancy, the first 21 weeks or so, the ultrasounds looked good. But then an ultrasound showed something alarming. The lining of Alexis’ uterus was shedding. Doctors told the family the prognosis was grim.

Alexis burst into tears. She thought it was something she had done wrong during her pregnancy. It wasn’t.

Days later, at 4 a.m., Marilyn Watkins heard her daughter screaming. Alexis wasn’t just in pain, she was in labor. At IU Health Methodist Hospital, doctors gave her steroids. They tried everything to delay those baby boys being born.

But on July 5, at 10:51 a.m. Jalen was born and less than three hours later came Jaden. Both boys were born with necrotizing enterocolitis, a life-threatening disorder common in premature babies, where bacteria invades the bowel and destroys the intestinal wall. The disease can lead to malnutrition, severe infection and even death. Chances of survival are just 50 percent.

The boys were taken to Riley where they both would need emergency surgeries. The family had Jaden and Jalen baptized before Dr. Markel operated. Jalen died within days of being born.

Jaden, who was born with perforations in several sections of his intestines, had three surgeries in the first few days of his life to repair the intestinal holes. He was the smallest baby Dr. Markel had ever operated on.

“Every day, it was touch and go,” said Watkins. “We didn’t know what was going to happen.”

As scary as the situation was, though, Watkins found herself turning to an unlikely source for strength – her own teen daughter.

“Alexis, seeing her so strong,” Watkins said. “She amazes me. And I’m so proud of her.” 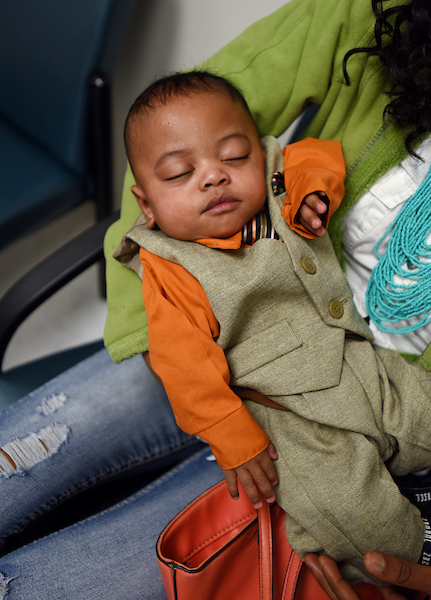 No one knows exactly where Alexis found a suit so small. But Jaden is at Riley to meet his care team in a light brown three-piece suit, complete with an orange button-up shirt and matching handkerchief in the pocket.

Jennifer Stark just keeps smiling and staring and then smiling some more. She is a NICU nurse at Riley, who cared for both Jalen and Jaden. She hasn’t seen Jaden since he left the hospital in December.

“Alexis and her family were wonderful from beginning to end,” Stark said. “Their heart and their commitment to Jaden? They’re special, special people.”

Stark talks about Alexis and how, even as a teen mom, she grasped the need to work together with Jaden’s medical team.

“She was here everyday, working with us,” Stark said. “We were partners. Without her, I don’t think Jaden would have done as well as he has.”

Amanda Coffman walks into the room, another one of Jaden’s NICU Riley nurses. She can hardly contain her excitement.

“Do you remember me?” she asks Jaden, who starts kicking his feet. “You’re just so excited. Oh, you are so handsome.”

Then she turns to his mom: “He looks really good Alexis.”

As Coffman holds Jaden, she talks about the miracle he is. Being born at 23 weeks is almost unfathomable.

“That’s half the time he’s supposed to spend inside his mom,” she says. “He just overcame it all. He’s a survivor. He fought so hard.”

It helped that Jaden wasn’t fighting alone. Alexis, Coffman said, always had faith – in God and in the medical team.

But most importantly, Coffman says, “Alexis had faith in Jaden.”

Formula For Growth: She Helps Those Tiny NICU Babies Flourish

Wendy Cruse is a dietitian in the neonatal intensive care unit. Figuring out the perfect nutritional formula for each baby is a complicated and delicate balance.

What Are the Health Benefits of Breastfeeding Versus Formula Feeding for Moms and Babies?

In the United States, 77 percent of new moms breastfeed their babies. The Center for Disease Control...

Holly Paauwe, an employee at Riley, talks about her and her daughter's own patient experience at Riley.