This 9-month-old has his smile back after undergoing a lifesaving liver transplant.

Nine-month-old Max has not had the easiest time of it since he was born, but you wouldn’t know it by his giggle.

Even as he lies in a crib in the infusion clinic at the Riley Outpatient Center, he smiles and squirms and squeals as he fights sleep. 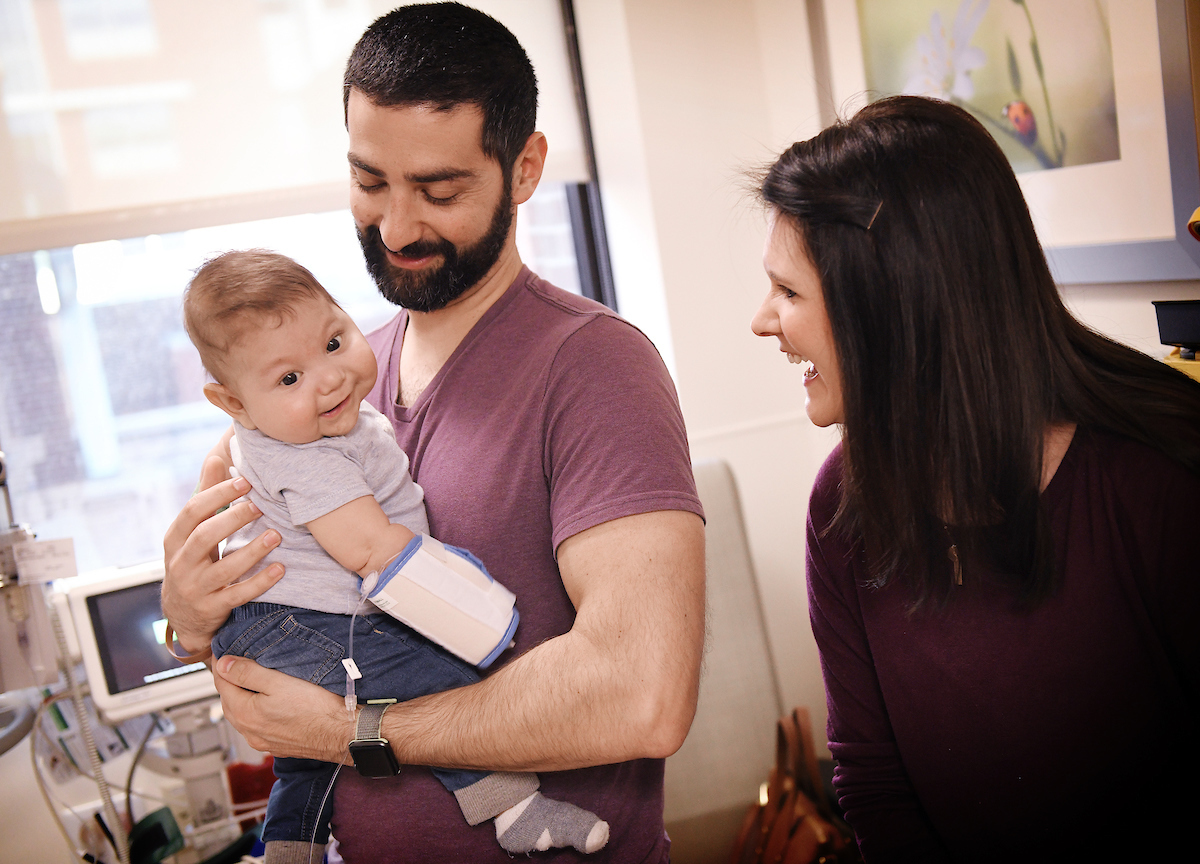 The baby, son of Jonathan and Kristin Seward, was infected in the womb with cytomegalovirus, or CMV. It’s a common virus in adults, often presenting no symptoms, but it can cause complications during pregnancy and for people with weak immune systems.

In Max’ case, his parents found out he was infected with the virus when Kristin was 36 weeks pregnant. And while it’s rare for it to be transferred to a developing fetus, when it is, it can cause serious problems – hearing loss, vision loss and developmental delays among them.

While they’re not sure that Max has suffered any of those ill effects yet, he was born with an enlarged spleen and liver. He was severely jaundiced and doctors started him on intravenous immunoglobulin (IVig) treatment.

But gastroenterology physician Girish Rao expected his liver to heal itself in time. When that didn’t happen, his parents were told to prepare for a transplant. 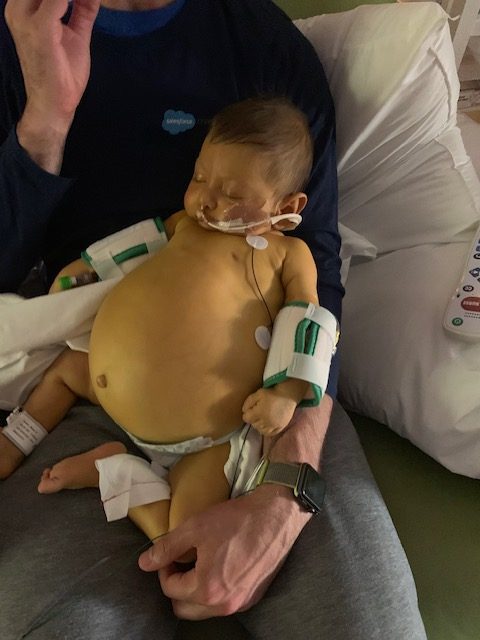 Max, whose full name is Maxen, was on the transplant list for seven weeks and remained at Riley Hospital for Children nearly the entire time. His belly was horribly distended and his skin was yellow. Time was running out.

Finally, on Sept. 6, Max got his new liver. Actually, he received a portion of an adult liver from a deceased donor, which doctors said would regenerate in time to fit his body.

Dr. Chandrashekhar Kubal performed the transplant surgery, originally estimated to take four to six hours. Instead, it took 10. Time crept by as the baby’s anxious parents waited throughout the night, supported by friends who took turns sitting with them.

Once the surgery was complete, in-hospital recovery was estimated at three weeks, but it took Max five weeks before he was ready to be discharged.

“Everything was harder for Max,” Jonathan said.

As his dad talks, Max is jabbering, then fussing until Jonathan lifts him out of the crib. His belly is still larger than most babies his age, but it’s nowhere near the size it was when Max was the sickest.

Max is fascinated by the camera that is trained on him and strikes a pose. His mom nuzzles his nose, calling him a little flirt.

“He used to glow like a highlighter and now (his skin) is normal-looking,” she said, showing a picture on her phone of a sickly Max who couldn’t even be held like a typical baby.

“He was bright yellow, his eyes were yellow, and his belly was absolutely massive,” Jonathan agreed. “What a liver does is kind of amazing.”

In all, Max was hospitalized for 93 days, but now he returns regularly for labs and for his Cytogam infusion to kill off any remaining CMV infection. Soon that will move to monthly infusions.

Max still has to take multiple medications at home. As those are tapered off over time, he will continue to take anti-rejection meds for the rest of his life.

“His body sees the liver as a foreign object, even though it’s keeping him alive,” Jonathan said.

He went home with a feeding tube, but within a week that was gone.

“He eats like crazy,” Kristin said. “Before, he was so bloated. His belly looked like a watermelon, but his little arms were stick thin. Now he has rolls. I’m like, ‘Yeah, I have a chunky baby now.’ ” 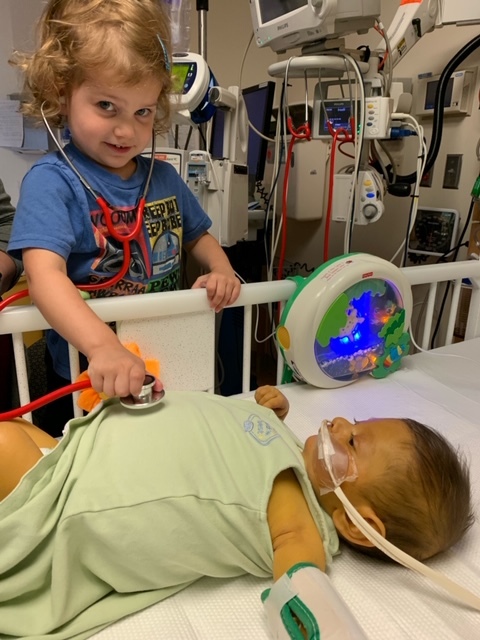 Max is also a happy baby now, his parents say. He loves his big sister, Bexley, and she adores him.

“We didn’t realize how bad he really was until the worst was over,” Jonathan said. “Once he got the liver, it took a while but then he turned the corner.”

During those long days in the hospital before and after transplant, both mom and dad would pass the time watching television with Max – the “Today” show for Kristin, and “The Office” and “Home Improvement” for Jonathan.

Now, Max is mesmerized by the Disney channel, which often keeps the youngest Riley patients entertained during hospital procedures. When they have time, Max and his parents love to return to 7 West and 9 West to visit the staff who cared for him during his long stay.

As they settle into life at home with Max and 3-year-old Bexley, the parents joke that they hope he can get a golf scholarship someday so they can live on a golf course. He can’t play contact sports, but dad loves golf, so it’s a pretty sure bet that he’ll be taking his son out on the links as soon as he’s able to walk.

If golf doesn’t work out, “it would be pretty cool if he went into medicine,” Jonathan said.

“We just want him to have a normal life,” Kristin said. “We won’t force anything on him.”

Except his daily meds, of course.

“There are still risks, and rejection could happen, and we worry about 14-year-old Max who doesn’t want to take his pills because he thinks he’s totally healthy,” Jonathan said.

That’s why they took plenty of pictures of a very sick Max so they can show those photos to their son as he gets older and remind him what is keeping him alive.

The day after transplant, Jonathan remembers an IV pole with nine or 10 different medications being pumped into his little boy. He was intubated, he was unconscious, and a ventilator was helping him breathe. It was a scary time.

At the same time, he and his wife knew that there were other kids in the PICU who had been there for a long time and their parents didn’t know if or when they would be able to go home.

Despite all their son has been through, they consider themselves lucky.

“We know there are kids in way worse condition. He was able to heal with transplant, and some kids don’t get that healing.”