A Musical Escape: Riley Patients Get Piano Lessons While On Dialysis

Patients on dialysis at Riley – who sit for hours a day trying to find a way to pass the time -- are now getting piano lessons. The program is believed to be the first of its kind in the nation.

Jae’La Krider couldn’t believe it. She really just could not believe it when they told her the news.

She was going to get to learn to play the piano?

No. Right now, Jae’La can’t jump. She’s lying in a hospital bed with her body hooked up to a dialysis machine.

“They were like, ‘How is your child still walking?’” Jae’La remembers.

Jae’La has end stage kidney failure and, for the past five years, has been on hemodialysis. 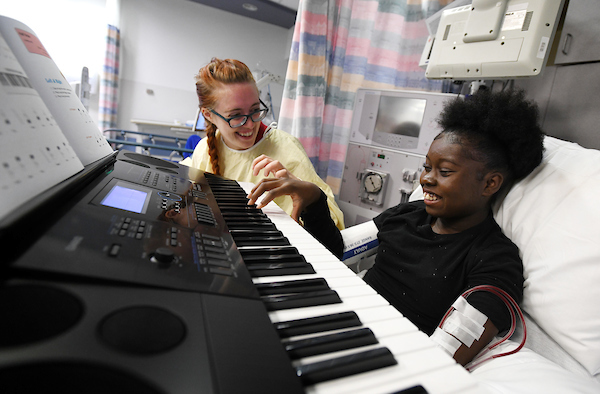 She comes to Riley Hospital for Children at IU Health three days a week and sits there for hours -- as the big machine does its work – as she waits for a transplant.

She’s become close to Henry Whitacre, the little boy in the bed next to her. She teases the nurses. She plays on her cell phone. She finds anything she can to pass the time.

And so do the other patients in the unit. That’s how this idea was born -- a light bulb moment for Bethanne Johnston, the nurse practitioner for dialysis.

As these kids sit there for hours on end, with nothing to do, why not teach them something -- something beautiful?

Jha’Vion Shelton, 12, has that big, fancy keyboard in front of him, his eyes wide.

This is his first piano lesson. He starts with the A key and pushes each key on the piano in front of him, saying the notes’ names. 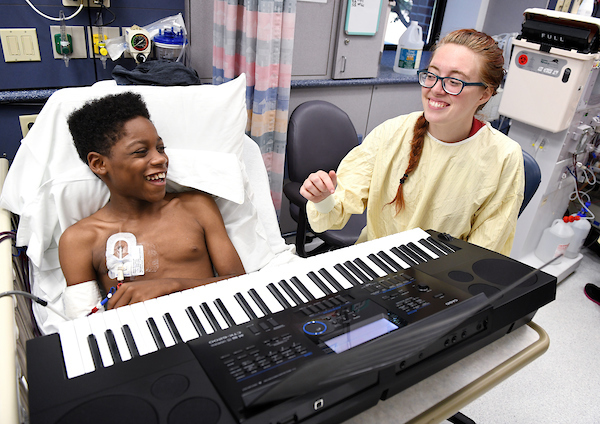 His teacher Bethany Daugherty stops him. “No H or I in music, remember?” she says to Jha’Vion. “Try again.”

And this time, he gets it exactly right.

“This is kind of cool,” says Jha’Vion, whose goal is to learn to play “Twinkle, Twinkle Little Star.”

That won’t be a problem. It will happen.

Each Monday, patients who choose to, will get half hour piano lessons as part of the Riley Nephrology Music Program. It’s believed to be the first program of its kind in the nation. Four kids, so far, have signed up, ranging in age from 8 to 17.

Johnston raised money through the Riley Children’s Foundation -- enough money to give each child a keyboard to take home to practice. And enough for keyboards that will stay in the unit for lessons.

“The goal is to offer these kids an opportunity to experience music in a way that has never been an option for them,” says Johnston. “They spend so much time at Riley and families are stressed with medical expenses. These kids don’t often have the opportunity for ‘normal kid activities’ like music lessons.”

Johnston says she feels passionate about giving these kids the opportunity, because there are so many benefits to learning music. 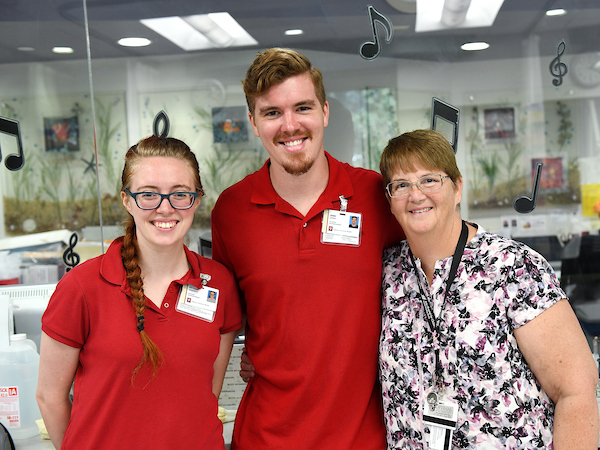 Of course, Daugherty can wholeheartedly agree with that. She has been playing piano since she was 4. Now, she is an instructor at Vibe Music Academy, which is owned by Johnston’s son, musician John Gotsis.

“Music is beneficial to anyone in any kind of setting, but especially in a hospital setting,” Daugherty says.

There are physiological things that happen. Music is relaxing. It can affect blood pressure levels and lower stress and anxiety.

“But also character wise, it teaches self motivation, self discipline,” she says. “There is a strong sense of, ‘If I put in the work, the rewards are shown right away.’ It’s also something that gives a sense of confidence and pride.”

Down the road these kids at Riley will put on recitals and do performances.

“They will get a chance to show off their hard work,” Daugherty says.

They will get a chance to be known for something wonderful, something other than kidney disease.

That’s the hurdle with patients on dialysis – being able to have a life outside of their medical one.

“It’s such a big part of their lives, their profession ends up being a dialysis patient,” says Jeffrey Leiser, M.D., medical director of Riley dialysis. “There have been all sorts of attempts to try to change that.”

When Johnston came to Dr. Leiser with her idea, he loved it. 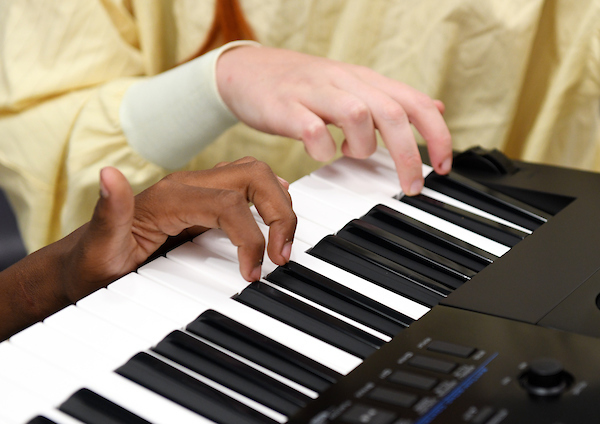 “It’s going to provide these kids with an alternative way to spend time and we hope to really enrich their lives and spill out into the other dimensions of their lives,” says Dr. Leiser. “Instead of making dialysis just a chore or a burden, make it something that can really evolve into something.”

Anthony Doss sits up straight and tall in his hospital gown.

At 8 years old, he is the youngest student in the program. Anthony says he’s played some instruments in his school music class – drums, the recorder – but never piano.

He lifts his wrist and curls his fingers up like a cat does her claws – at Daugherty’s request.

“Perfect,” she tells Anthony. He beams.

This is a dream come true for these kids. No one can explain that better than Jae’La.

After learning the basics -- finding the middle C, learning about tempo and loudness, figuring out that two quarter notes equal a half note -- Daugherty challenges Jae’La to try a simple song.

Jae’La plays it, cautiously and perfectly.

“See? There you go,” says Daugherty. “You’re playing the piano.”

Three Diverse Pediatric Doctors, One Organ in Common: The Kidney

There’s a triangle of doctors who work with a dedicated staff at Riley Hospital for Children at IU Health. Their focus is on pediatric kidney disease and transplant.

4-year-old Henry got a kidney for his birthday; next he’s getting a little sister

Since his transplant last summer, the Cheetos-loving boy with the contagious laugh has been hard to keep up with. He’s been asking for a puppy, but his mom says a baby sister will have to do for now.

Riley Nurse – Her Mom Gave Her A Kidney

Allyson Brock a nurse at Riley Hospital for Children at IU Health received a kidney from her mother eight years ago. It was the influence of her mom, a nurse, and of her IU Health Transplant Coordinator, that helped her decide to pursue a career in nursing.