A mother’s love: ‘I’ve spent my whole life trying to keep him alive and well’

Donate Life Month: Riley nurse practitioner Amy Hatton is sharing her personal story of organ donation to encourage others to consider giving the gift of life.

Joshua Hatton was born with renal dysplasia. His kidneys never fully developed – they were small and scarred, putting him immediately in danger without proper medical treatment.

Today, Joshua is 20 years old and a sophomore at Purdue University. He is thriving, thanks to the gift of a kidney his mom gave him nearly seven years ago.

Hatton, a nurse practitioner on the palliative care team at Riley Hospital for Children at IU Health, is sharing her personal story, with Josh’s blessing, to spotlight Donate Life Month and to encourage people to register to become organ donors and make their wishes known to family members.

Tony and Amy Hatton knew something was wrong with their third child before he was born. Ultrasounds revealed a possible problem with his kidneys, first at 20 weeks, then becoming clearer at 24 and 32 weeks. Amy, then a pediatric nurse at IU Health Methodist Hospital (before it was IU Health), was sent to a fetal medicine specialist and monitored closely.

When Josh was born at 38 weeks, it was confirmed that his kidneys were malformed, leaving him with 50 percent kidney function. More tests followed, and he was put on medication, but the couple took their baby home to join his two older siblings.

It was on St. Patrick’s Day 10 days after Josh was born that the couple received a phone call that terrified them. They’d already been at Riley that day for labs and were home, waiting for a call from Josh’s nephrologist to give them the results. What they got instead was an order to return to the hospital right away.

“I’ll never forget the look on my husband’s face,” Hatton said. The physician told them to get Josh to the emergency department as soon as possible. “He’s very sick,” the doctor told them.

Josh had a dangerously high potassium level, which could stop his heart at any time. From there began a flurry of activity that ended with Josh being admitted to the NICU.

“I’m a nurse, and I’m sitting there crying. I was on the wrong side of the room this time,” she said. “It was totally surreal.”

It was also the first time she heard the word transplant as it relates to her son. 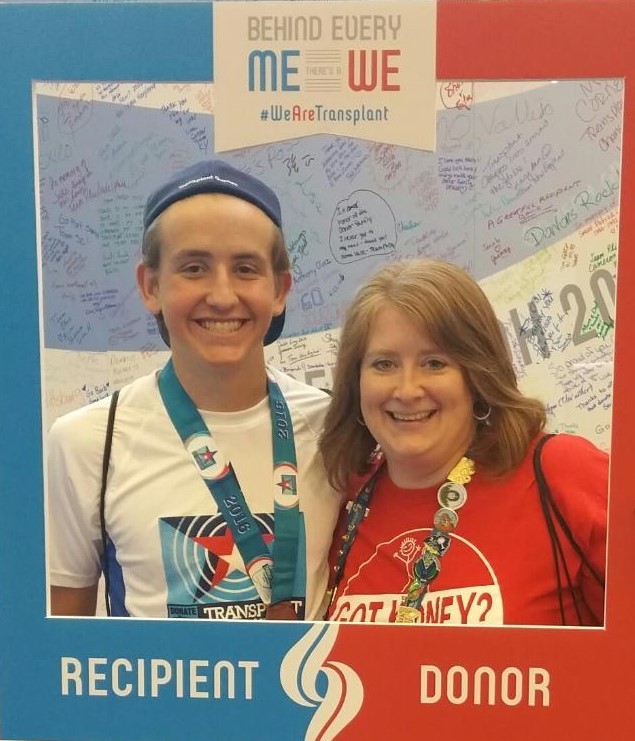 The youngest they would transplant was about 20 pounds, doctors told her, and Josh was 8 ½ pounds. But thanks to great care and taking daily medication, their son got by on his reduced kidney function for several years, even avoiding dialysis. Then in fourth grade, his kidney function dipped into the 30s.

“We had the transplant/dialysis discussion again – I still have all the notes at home,” his mom said.

He stabilized, but with a lot more medication and monitoring, and a continued slow decline.

It was in 2012, as Josh was finishing seventh grade, that the decision was made to pursue a transplant.

“His best chance was with a living, related kidney, and we knew his blood type and mine were the same,” Hatton said.

Nothing about the process was easy. Except for Hatton’s sense of purpose. When she was asked during a mental health evaluation (standard procedure for organ donors) why she wanted to donate a kidney, she didn’t mince words.

“Of course I’m going to donate my kidney. He’s my child – he can have both of them if that’s going to make him OK.”

Her biggest concern was that when Josh needed her most after the surgery, she would be unable to help him. She would be recovering at IU Health University Hospital, while he underwent surgery at Riley Hospital with Dr. William Goggins, the rock star of kidney transplant procedures, with more than 2,000 to his credit.

She counts Nov. 14, 2012 as one of the hardest days of her life. A picture taken that morning shows 13-year-old Josh, standing next to her, holding the purple stuffed kidney she gave him as a stand-in until hers was delivered to him.

Tony Hatton was under strict orders from his wife to stay with Josh and not to visit her over at University. She arranged for her parents to be with her and wanted Tony to take care of their son. 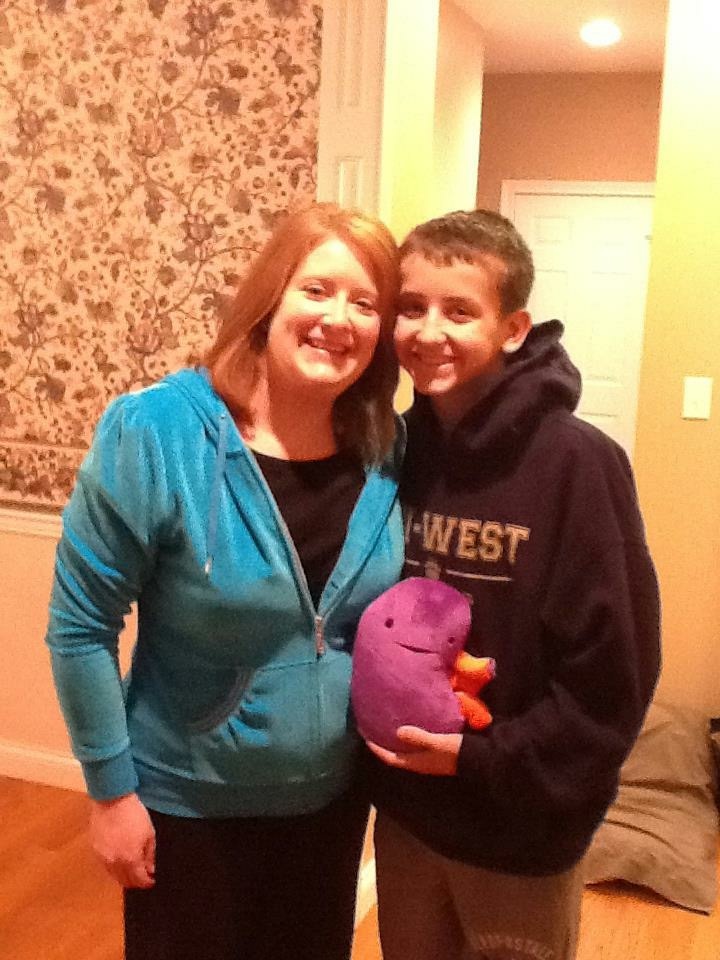 He was her first thought when she woke up from surgery. “I could see the clock from my recovery room bed, and I was like, ‘Is Josh OK?’

“This was a Wednesday, and I didn’t get to see him until Friday,” she said. “I cried, it was terrible. The first time I went to see him was the first time I was already behind on his medical care. Tony was two days into his post-transplant life that I wasn’t there.”

Josh’s recovery took several months, in part due to his compromised immune system, a direct result of the medication he was taking to keep his body from rejecting the kidney. He was in and out of the hospital for six months.

“We knew everyone on 9 West,” Hatton said.

Josh went on to grow 8 inches taller in the first year after transplant. He is thriving, his mom says, but only by paying attention to his health, which can be a challenge during college.

Ages 18 to 23 are a high-risk period for losing a kidney due to lifestyle changes and transitioning to an adult care team, Hatton said. When her son left for college, she had to trust that he was ready, that she and her husband had prepared him for the responsibility of keeping himself alive.

It was hard for the mom, who was always deeply involved in her son’s care. “I’ve spent my whole life trying to keep him alive and well,” she said.

Josh takes medication every 12 hours and likely will for the rest of his life.

“Transplant is not a cure, it’s a treatment for whatever your disease is,” Hatton said. “It’s a great treatment, but it’s not over. He was 13. He’ll probably need another one.”

But the longer this one can last, the better. Medical care is improving every day, and scientists are even working on developing an artificial kidney. That’s because the supply of donor kidneys is well short of the demand.

“Like many of the kids in this place who have to face the thought of their own mortality, we have had many tearful conversations about it,” Amy said. “He’s a college student who has to think about his health every 12 hours. No matter what he’s doing, he needs to stop and take his medicine.” 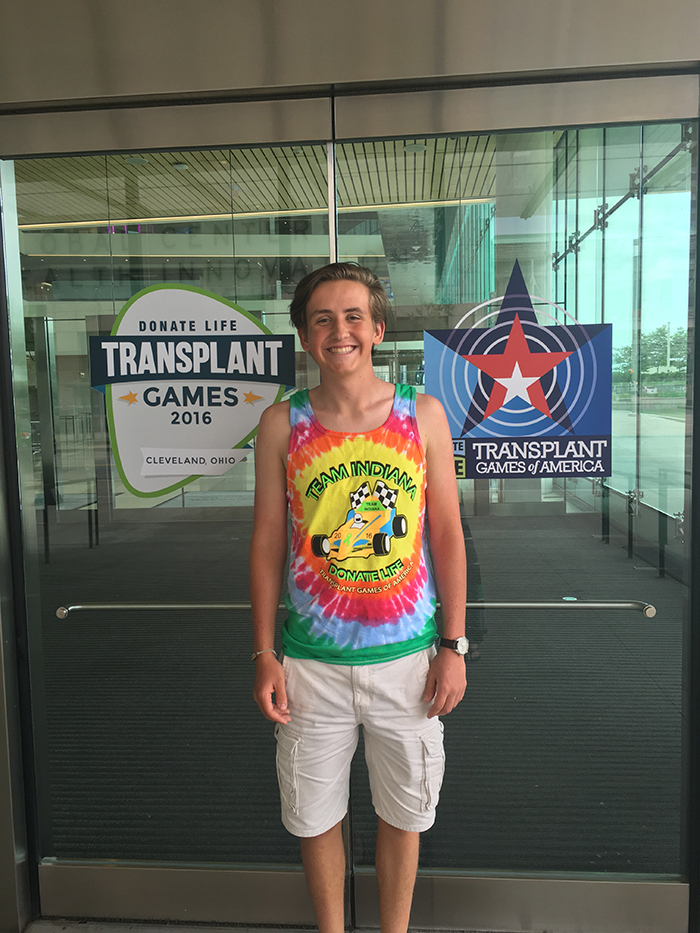 Josh and his entire family have become advocates for organ donation. They participate in the Transplant Games of America, which offers competitive events to living donors and transplant recipients. The Donate Life Transplant Games highlight the critical need for organ, eye and tissue donation.

In 2014, Josh was the youngest participant on the Indiana team. Over the years, he has competed in basketball, volleyball, golf and table tennis. He and his family plan to attend the 2020 Games in New Jersey.

“We’ve met so many amazing people in the transplant community,” Hatton said. “Gift doesn’t seem like a big enough word for what they’ve been given. You see these people living and living well, not without hurdles and bumps, but still living well.” 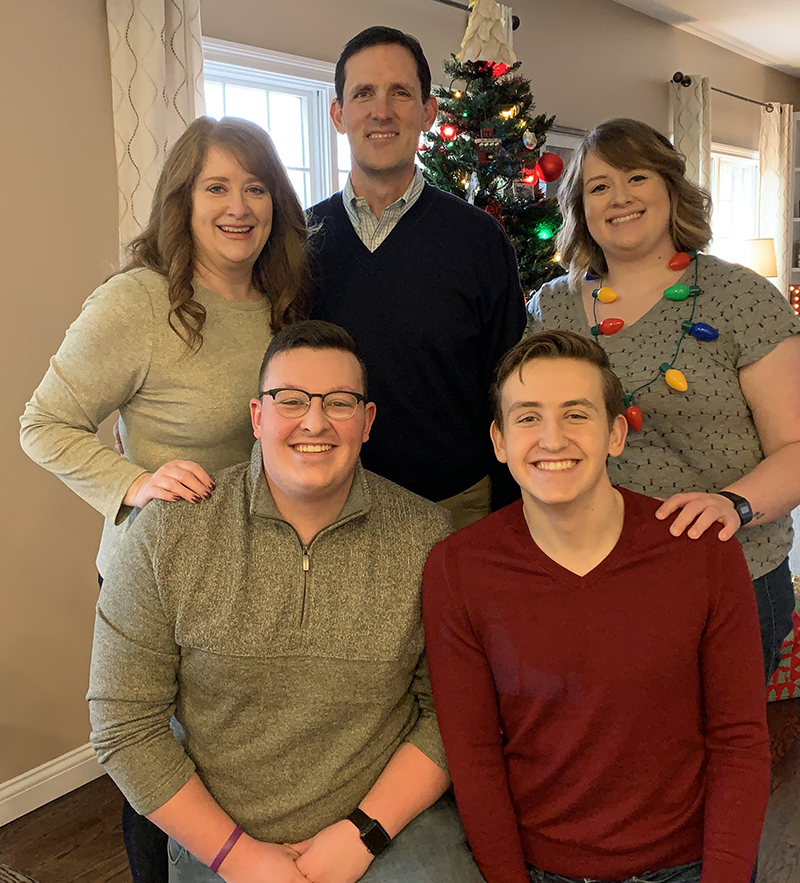 Hatton is thankful that she was able to save her son’s life, but she wants to do more. She wants to raise awareness of the need for more donors – in life and in death.

“If you have any thought that you might want to donate a kidney while you’re still alive, there are a lot of people who need one. I know it’s scary to think about having an organ taken out, people have a lot of questions. I just want people to know that it’s possible. I mean, we have two.”

Barring a living donation, she asks that people make sure their loved ones know if they want to be an organ donor after they die and to register here.

“I’ve threatened to haunt my family if I pass away and they don’t let them have whatever they can use,” Hatton said. “I won’t need it anymore. Why would you not want to give someone the opportunity to live their life to the fullest if you had the ability to do that?”