Her son seemed healthy at birth, but six weeks later, he was in severe respiratory distress. It would take weeks to confirm that he suffered a rare genetic disorder that restricted his breathing while asleep.

The tears fall easily when Deanna Todd allows herself to think back to those dark days. The days when her infant son was by all appearances – lifeless. There was no color in his cheeks, no movement in his limbs, no sound of his cry. 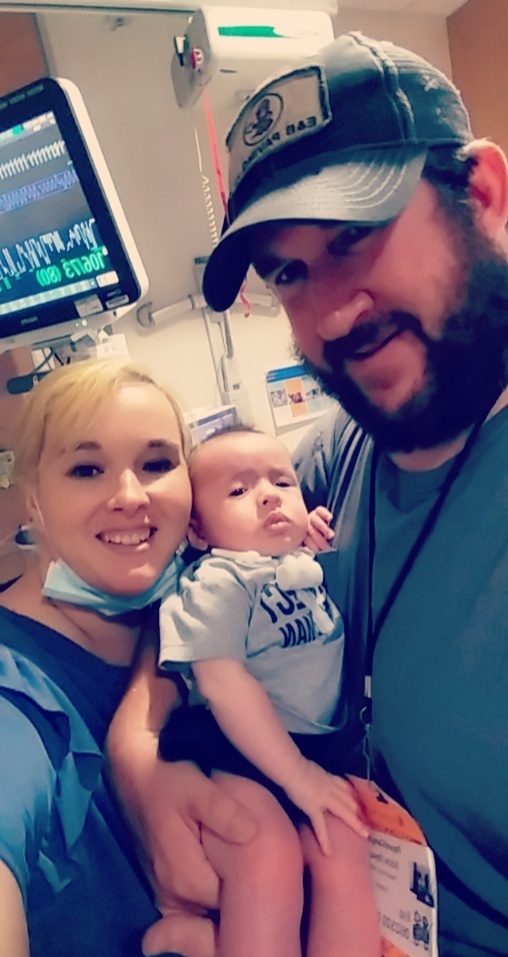 That was three months ago, and Brixton Stewart was just six weeks old. He seemed healthy at birth, weighing nearly 8 pounds and taking to the breast, then the bottle with ease. But he slept a lot, Todd said. He wasn’t as active as her four other children had been as babies.

With the COVID-19 pandemic beginning to rage through the country in late March and early April, Brixton missed his first well-child visit with his pediatrician. But Todd was beginning to wonder if something was amiss with her baby. He wasn’t eating as much. He seemed pale.

“Looking back, there were signs, but I didn’t want to overreact,” the Bedford woman said. “I’m not a new mom. I know infants can go through stages. In pictures now, I see it – his eyes were puffy, his lips were a little bluer than what I noticed at the time. I kept telling myself there’s nothing wrong with my baby.”

It was a Saturday morning in April when she rushed her son to the pediatrician after he suffered what she and Brixton’s dad, Bobby Stewart, thought was a seizure. The physician tested Brixton for strep and RSV (a respiratory virus), then checked his oxygen level. It was in the 70s. Normal pulse oximeter readings range from 95 to 100%. 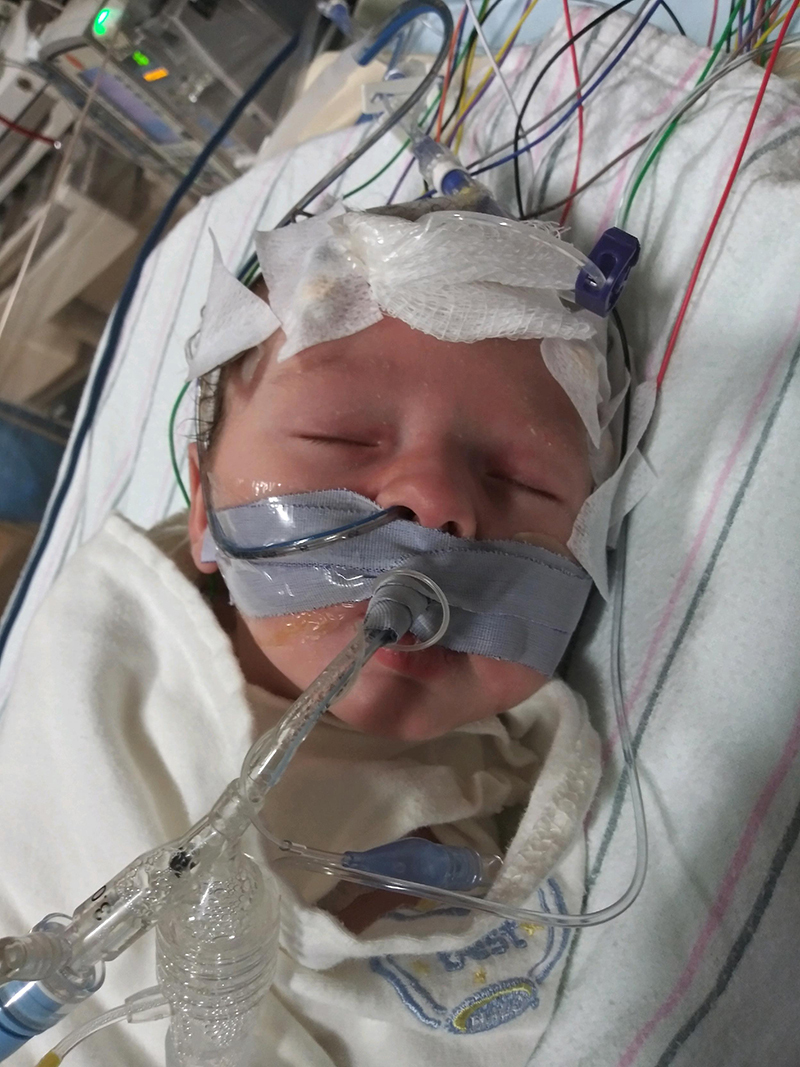 She gave the baby a breathing treatment, but his oxygen level continued to fall. From there, things escalated. The doctor hooked him up to oxygen and called for an ambulance, even though Brixton didn’t appear to be struggling to breathe at that time.

That changed quickly. For the next three hours, Todd watched in horror as her baby had to be resuscitated multiple times in the emergency department of IU Health Bedford Hospital. Because of COVID, she and Stewart weren’t allowed to be together with their son in the ED. She stayed with Brixton, and Stewart waited outside in the parking lot while she frantically texted him as things unfolded.

That’s about the time someone pulled some strings and Brixton’s dad was allowed to come into the hospital, just in time to see the team doing chest compressions on his infant son. Todd was curled up in a corner of the room, crying and feeling completely helpless. 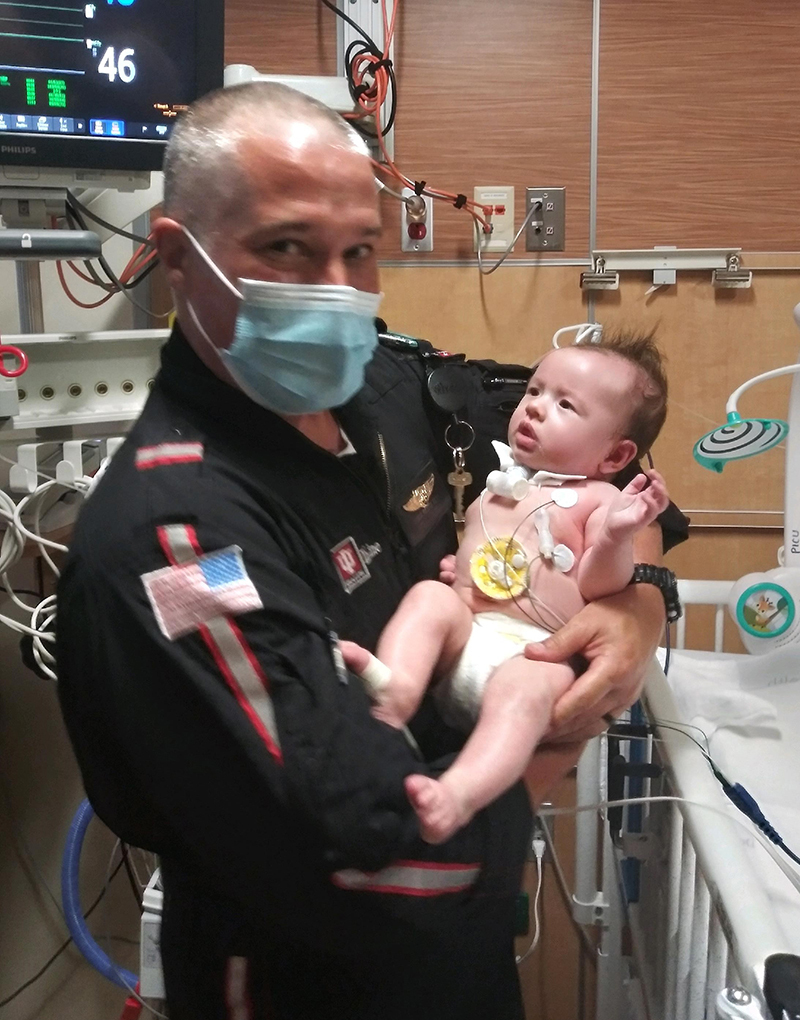 Helpless but not hopeless. Doctors had been on the phone with Riley Hospital for Children, a 90-minute drive away, through much of the ordeal. Brixton was too unstable to be flown via IU Health LifeLine, but the LifeLine team flew to Bedford to transport him to Riley via ambulance.

The respiratory therapist and nurse duo (Todd only knows them as John and Andy) also had trouble getting Brixton intubated, but the third time was the charm. The trip to Riley was harrowing – the crew had to pull over twice on the road to give Brixton medicine and to talk to the PICU doctors back at Riley.

Once there, Todd refused to leave her son’s side for the next several weeks, sleeping in the room, anxious to talk with doctors and nurses as they developed a treatment plan. Stewart stayed in a nearby hotel part of the time. COVID restrictions meant that only one of them could stay with Brixton, and it had to be for several days at a time before they could switch off.

“We came to Riley on April 11, and the first time I went home was the weekend of May 19,” Todd said. “It was about three weeks before we knew what we were up against, and I just didn’t feel comfortable. I was too scared to leave.”

Meanwhile, Brixton passed every test doctors threw at him, including COVID-19, pneumonia and meningitis. Todd said in the first weeks of his hospitalization, his condition was such a puzzle she asked one of his physicians, Dr. Kamal Abulebda, if he felt like he was on an episode of “House,” a TV medical drama.

After ruling everything else out, their answer finally came by way of genetic testing, which revealed that Brixton was afflicted with a rare respiratory condition, Congenital Central Hypoventilation Syndrome, which affects normal breathing during sleep. People with the disorder take shallow breaths (hypoventilate), especially during sleep, resulting in a shortage of oxygen and a buildup of carbon dioxide in the blood.

There are an estimated 1,500 known cases of CCHS worldwide. Treatment focuses on providing breathing support, usually through a ventilator. Some children may need a ventilator 24 hours a day, but others like Brixton likely will only require it when sleeping as he grows.

Aries Lowden, a nurse practitioner on the pulmonary team, acknowledges that the disorder is fairly rare.

“We see it with our home vent population because kids with this diagnosis all will require a ventilator at home at least until they’re older to the point where they can do a CPAP mask when they’re sleeping,” she said. “When they’re awake, they wouldn’t need it, but since he’s a teeny tiny baby, he falls asleep whenever he gets tired, so they have the ventilator for that protection.”

Todd, who admits she was a Google queen during her son’s ordeal, knew when he was diagnosed that he likely would need a tracheostomy, a surgical procedure that creates an opening in the neck to place a tube into a person's windpipe.

She was terrified at the thought that doctors were going to cut a hole in her baby’s throat, but she knew it had to be done.

“Those first three weeks at Riley, he was sedated and more or less lifeless,” she said. But after the trach placement May 5, he’s been a completely different baby, Todd said. He’s awake more, he’s alert, and he smiles constantly.

“His siblings will be shocked when they see him. He has almost doubled in size. Once he had the tracheostomy, he was able to relax and breathe and grow.”

A HAM FOR THE CAMERA 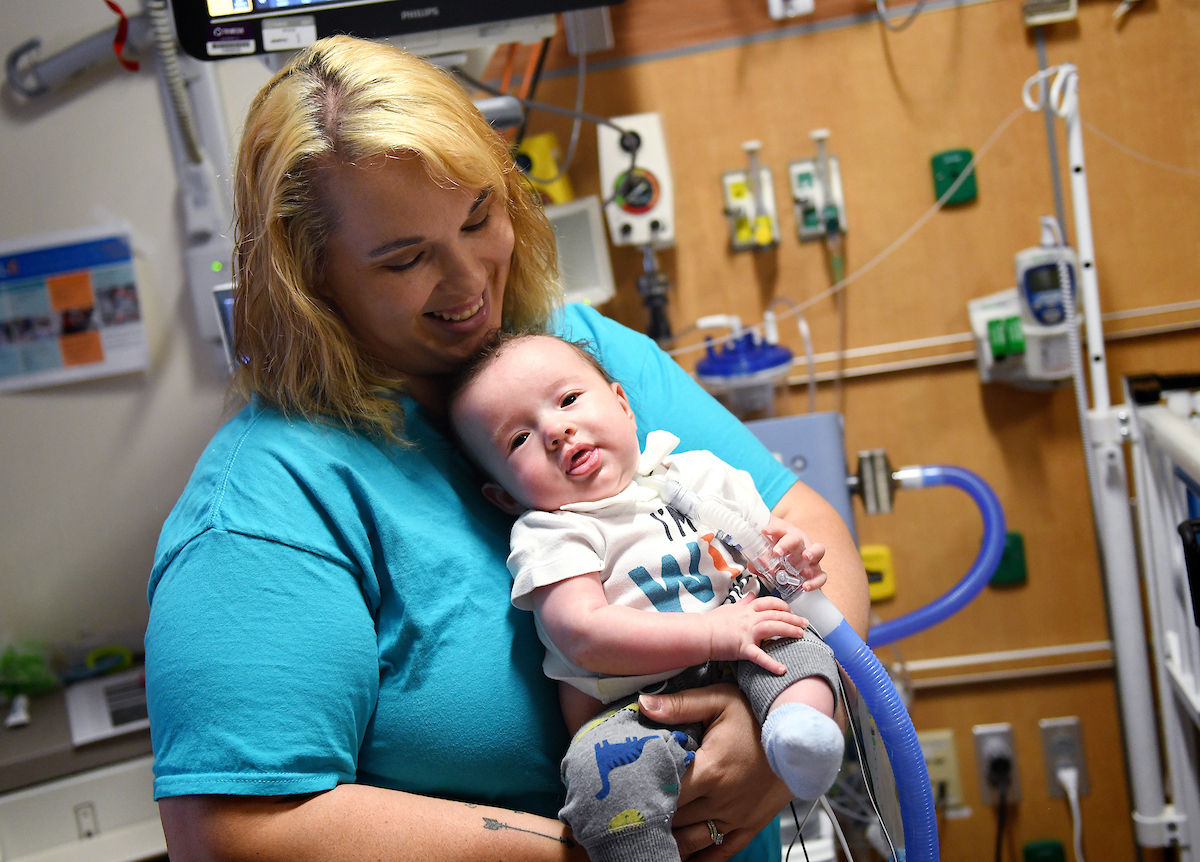 Brixton was awake and smiling for the camera last week, while also sucking vigorously on his tiny thumb. His mom had just finished bathing and dressing him. She has been involved in his care from the beginning, not wanting to miss the special bonding moments in his first few months of life, even if they had to happen in a hospital. She admits that at first the tubes and wires coming out of her little boy scared her.

“It was overwhelming, but you figure out your role,” she said. “I was afraid to touch him, I didn’t want to cause harm by holding him, so it took a while to feel comfortable. Now, it’s just part of him.”

Brixton’s engaging personality has been able to shine since breathing became easier for him. Nurses on the PICU floor come in just to get a flash of his smile to carry them through the day.

“Everybody loves him, he’s so adorable,” Lowden said. “When you walk in the room, you are guaranteed a smile.”

When the nurse practitioner first met Brixton, he was still intubated and heavily sedated. He’s come a long way since those early weeks, she said, gaining weight and growing several inches.

“Once he could have the tube come out of his mouth and have the trach placed, he was able to start working on more of his developmental advances,” Lowden said. “Mom is here at the bedside with him almost daily, so that helps. She is very engaged with him, and that has helped him progress much quicker than others in his situation.”

Both Todd and Stewart have completed multiple training shifts with their son at Riley to ensure that they are prepared to handle all of Brixton’s care when he goes home. His two grandmothers have done the same.

And now that day has finally arrived. After 13½ long weeks at Riley, baby Brixton is going home this week, a milestone that both thrills and terrifies his parents.

“I’m so excited to bring him home, but I’m so nervous as well,” said Todd, who jokes that she would love to bring a team of Riley nurses home with her.

“We’ve had such amazing nurses the whole time we’ve been here. They’ve all fallen in love with Brixton, and he has really become attached to them. They have been angels at the darkest time of my life.”

She had a special reunion with one member of the LifeLine team, who stopped into Brixton’s room a few weeks ago to see the baby whose life he had helped save. The moment moved her to tears. She managed to get a picture of him with Brixton and a hug but still knows him simply as Andy.

“I kept saying thank you. We wouldn’t be going home with him without you and John.”

She also gives a shout out to the home vent team, who worked with her and her family to understand how to care for Brixton. Todd, who formerly worked as a certified nursing assistant, brought some healthcare experience to the table, but she learned more than she ever imagined – cleaning her son’s G-tube and trach twice a day, giving him medications and nourishment through his G-tube and giving him breathing treatments.

She wondered sometimes if she would ever see this day, when they would go home as a family.

“I remember not knowing what was wrong with him and if we were ever going to be able to take him home,” she said. “Several times a day, I would lay my hands on his chest and pray, ‘Please don’t take my baby. Whatever is wrong with him we will fight it, we will push through, and we will learn what we have to. If he has to be taken care of for the rest of his life, I’ll do it. Just don’t take my baby.’ ”

She wanted to share her story to raise awareness of CCHS, with the hope that others might learn from her experience.

“If we could help even one family whose baby has similar symptoms, and we can say maybe this isn’t normal, here is what you need to look out for, that’s our goal.”

Some children with CCHS go on to live active lives, even getting their trachs removed and wearing a CPAP machine at night. Todd hopes for the same for her child, but she’ll push through regardless.