A heart for Shannon

Her new life began the moment she received her donor’s transplanted heart. Now this former Riley kid wants to help others who are waiting for transplants.

Shannon Lowe would like to name the heart that is beating inside of her in honor of the organ donor who gave her a second chance at life. But for now, she doesn’t know anything about that person’s story.

Still, for eight months, she has counted the beats of her new heart as she counts her blessings.

“I’m so humbled,” said the 39-year-old longtime Riley Hospital for Children patient. “I don’t even know how to express what it means to get this gift. Everything I do isn’t enough to say thank you.”

Lowe was born with transposition of the great vessels, a group of congenital heart defects that required two open-heart surgeries by Riley cardiothoracic surgeon Dr. John Brown – the first when she was 10 years old and another five years ago. 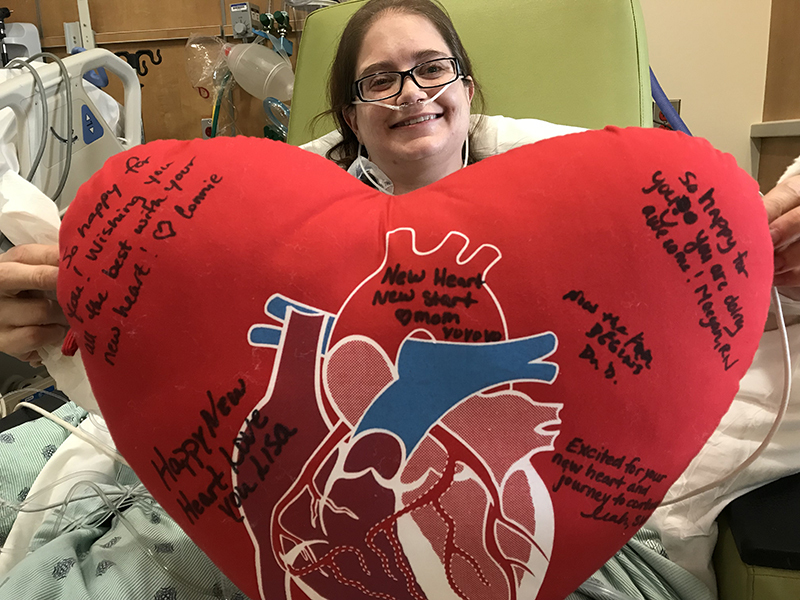 As her heart continued to fail, the cardiology team got her added to the transplant list while she was inpatient at Riley last year, and within 10 days, a heart became available. Dr. Mark Turrentine performed the transplant surgery June 28.

FROM RILEY TO METHODIST

“It’s very, very weird,” she said of transitioning her care outside of Riley. “I will always consider myself a Riley kid, but I come here for appointments now.”

She was at Methodist this week for a follow-up biopsy and blood tests to make sure her body is not rejecting the new heart. If all goes well, instead of returning every month as she has been, she could space out her visits to every four months.

With her is her mom, Lana Bevely, who has been by her side since this journey began nearly four decades ago. She has kept a watchful eye on her daughter since they returned to their home in Warsaw, Indiana post-transplant. Lowe lives in the bottom of a house with her grandmother, while Bevely lives on the top floor with her husband. 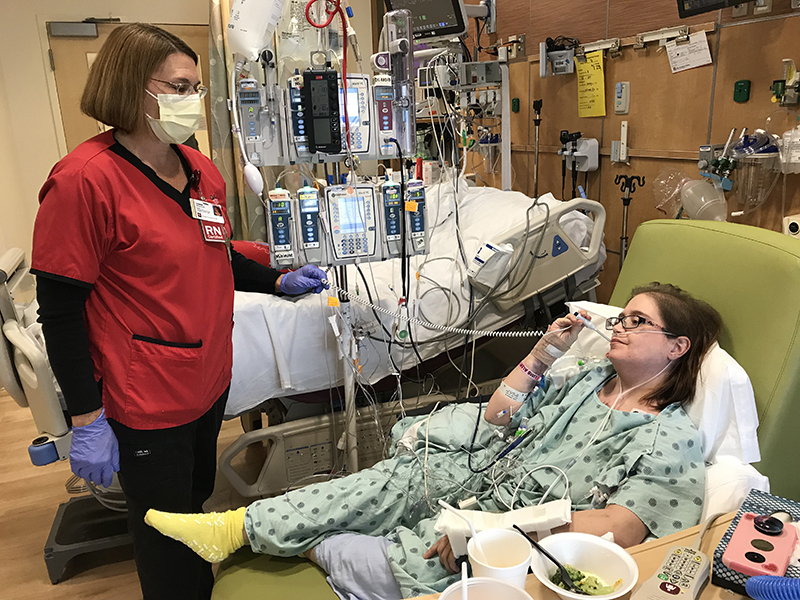 But not for long, Lowe says. She’s been looking for an apartment so she can live on her own again. That will be a huge step toward the independence she’s been craving since she became too sick last year to even drive.

Now she’s behind the wheel again, visiting with friends, going grocery shopping, even babysitting a 2-year-old occasionally, something she would never have had the energy to do previously.

Lowe said it was a stress test on a treadmill about two months after her transplant when she realized that her new life had begun.

“Never in my life have I been able to make it to the end, I always had to stop,” she said. “And on my very first day (of rehab) I passed it on the first try. I cried. It’s just a six-minute treadmill test, but I’d never been able to finish it before. That was the exact moment when I realized things were different.”

She gets tears just thinking about it.

“I’m still finding out what I can do. I didn’t realize people could walk from one room to another without getting out of breath,” she said.

“Every day I’m finding out that people with a ‘normal’ healthy heart can do this stuff and it’s still a whole new experience for me. I’m loving the fact that I don’t have to look for the closest parking spot to walk into a store.”

Bevely is thrilled with her daughter’s new-found independence, but understandably nervous as well.

“She’s very anxious to get going and living her life, and I’m wanting that for her, but yet I don’t,” the worried mom said, giving voice to parental fears everywhere. “She’s got a lot more energy now. It’s very nice to see.”

Bevely said her daughter has been a model patient, following her doctors’ directions on medications, diet and exercise.

Lowe, who carries a heart binder with her filled with photos, keepsakes and medical information, does not intend to waste the precious gift she has received.

“I don’t want to squander this opportunity; I’ve been fighting for it for a while.”

She enjoys sharing her story with other heart patients, particularly those waiting for transplants. She has done so at Methodist and hopes to be able to do the same at Riley. 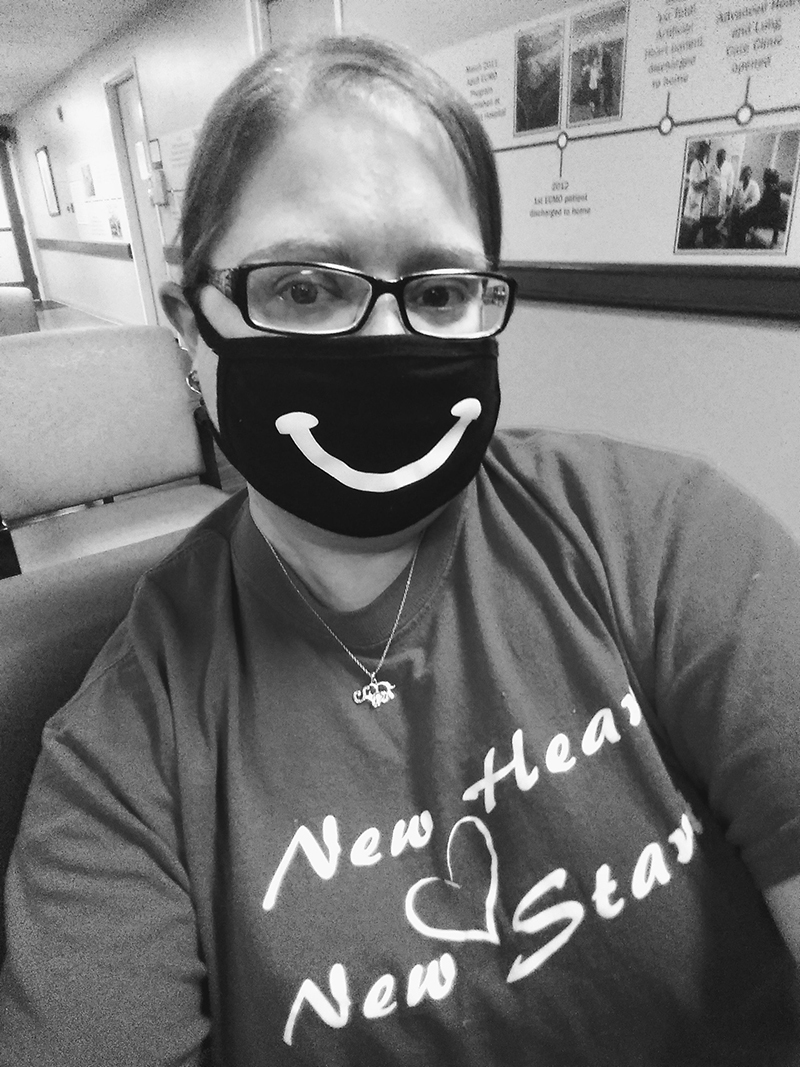 She already met with a young patient, the son of a friend, and talked with him about the surgery and the gift of organ donation. Before she left, Lowe gave that boy a small stuffed elephant, which to her represents good luck.

“When I had my first open-heart surgery when I was 10, my nurse gave me an elephant and said if the trunk is up it means good luck, so I’ve collected them ever since.”

She’s not kidding. Lowe estimates she has more than 500 elephant items – from plush animals to jewelry to knick-knacks, even a table shaped like an elephant.

On this day, as she waits for her procedure at Methodist, she is wearing an elephant necklace, the same one she wears for every test.

She knows she has benefited from a lot of good fortune along this journey, starting with her family and her medical team, but a lucky elephant can’t hurt, right?

As she moves forward in her new life, Lowe hopes to someday hear from her donor’s family. She has a song that she recorded at Riley featuring her old and new heartbeats that she would love to share.

But even if that day never comes, that person and that family will always have her heart, her gratitude and her love.

Read more:
New heart, new start for this 38-year-old Riley kid - When Shannon Lowe told her mom “it’s go time,” the emotional mother threw her bag in the car and started the long drive to Indy for her daughter’s heart transplant. She couldn’t believe it when she was pulled over by a police officer – and what he told her next.