Dr. Kamal Abulebda wanted to be a doctor as a boy growing up in Syria. Now 39, the Riley critical care physician is among Indy’s Best and Brightest.

From the time he was a little boy, Kamal Abulebda wanted to be able to take care of his family. If they had aches and pains, he wanted to be the one to answer their questions and make them better.

In Syria, where he was raised, there were engineers and other professionals represented in his extended family, but there was no one in the medical field. He decided to be the first.

“As a child, I always wanted to be that person who can actually help people in my family to start with, then maybe help my neighbors, then my city or my country,” he said. “Now, I accomplished that goal I had in my mind 30 years ago.”

Dr. Abulebda is a critical care physician in the PICU at Riley Hospital for Children at IU Health. He is an associate professor of clinical pediatrics, medical director of Pediatric Sedation Service, and he oversees simulation service.

And now he is being honored as one of Indy’s Best and Brightest, a who’s who of accomplished professionals in 10 different fields who have made significant contributions to the community before the age of 40. Junior Achievement created the event, which this year is virtual, to recognize the next generation of leaders who will serve as role models for JA students and youth in the community.

At 39, the Riley physician jokes that he got in under the wire this year as a finalist in the competition. He was nominated by other physicians, who highlighted his work in pediatric simulation, sedation and community outreach.

Other than a couple of uncles who live in the United States, Dr. Abulebda has no family here. After finishing medical school at the University of Aleppo in Syria in 2008, he moved to the U.S., and not long after that, his family moved to Dubai to escape war in their home country.

The civil war in Syria, which has killed upwards of 400,000 people, continues today. Because of the unrest, Dr. Abulebda has not been able to return home, but he has furthered his commitment to taking care of his countrymen by volunteering for medical mission trips organized by Riley cardiothoracic surgeon Dr. Mark Turrentine.

Dr. Turrentine has made multiple trips to Amman, Jordan over the years, where he and his Riley colleagues, including Dr. Abulebda, have treated many Syrian children with heart conditions. Those medical trips have been on hold for the past year due to the pandemic, a fact that weighs heavily on all involved.

“I’m very said that I’m not able to get back to Syria to do what I wanted to do there. I always have in my mind to go back to Syria and provide care,” Dr. Abulebda said.

That’s why the medical trips are so important. More than half of the pediatric patients he and his colleagues have treated in Jordan are Syrian or Syrian refugees, he said.

“Luckily, through the cardiovascular surgery team we are able to find alternative channels to help Syrian kids, and it’s meant a lot to us,” he said of himself and two Syrian colleagues, Dr. Riad Lutfi and Dr. Mouhammad Yabrodi.

“Those trips are a way for us to feel like we are contributing to healthcare worldwide, helping kids who are desperate.”

Dr. Lutfi, service line director for the PICU, first met Dr. Abulebda when both were fellows at Cincinnati Children’s nearly a decade ago. He describes his colleague as “a great leader, a great clinician and a rising star.”

“He has been leading our sedation services with great success. He has taught a lot of our fellows, and he’s very caring,” Dr. Lutfi said, adding that he believes Dr. Abulebda has surpassed him in many areas in which Dr. Lutfi trained him. “There is no more joy for me than seeing him be better than me in all of those instances.”

With his solid clinical training and extra training in simulation, he was a big part of establishing an outreach program at Riley to help in the care of children around the state, Dr. Lutfi said.

He helped establish the pediatric procedural sedation protocol at Riley and expanded sedation service to include pediatric patients throughout the hospital. He is a member of the Indiana Emergency Medical Service for Children Facility Quality Improvement Project designed to improve pediatric emergency readiness in the state.

As a leader of the Pediatric Community Outreach Mobile Education program, he and a multidisciplinary team of pediatric critical care physicians, emergency physicians and critical care transport providers have helped improve the care provided to sick and injured children in emergency departments around the state and country by providing simulation training and education.

Dr. Abulebda says the success of Riley’s outreach program, and in fact his nomination to Indy’s Best and Brightest, are a testament to his colleagues and made possible by the support of Riley and IU Health leadership.

“It’s very exciting for sure, very rewarding,” he said. “The mission and the vision of this team is to connect with all the community providers in the state, in the emergency departments and pediatric offices, and help establish a collaborative network that closes the gap in care.”

In other words, he said, “we took on the mission of Riley being not only Downtown Indianapolis, Riley should reach out to all our colleagues, collaborators, community partners, the whole state to ensure that all the kids being seen at any location in the state of Indiana are receiving high-quality care the same way they would receive it here at Riley.”

Instead of trying to bring all these people to Riley, the team reaches out to those community partners, providing resources and educational material. To do that, they use simulation, a technique that allows them to replicate patient experiences, diseases and presentations.

Not surprisingly, the COVID-19 pandemic has tested the program. A lot of the outreach planned last year had to be canceled or placed on hold because of restrictions put in place and the reality that emergency departments were hammered by COVID cases. The team eventually shifted to a virtual model of learning in place of in-person training.

But the goal is the same – to improve the health of pediatric patients around the state.

“For us as clinicians, we care about improving the care of patients everywhere,” Dr. Abulebda said. “At the same time, as a leader in pediatric care and as a center of excellence, Riley also cares about inspiring that relationship with our community partners.

“Most of the time when these kids get sick, they don’t come to Riley right away; they go to emergency departments throughout the state before they come to us, so we work pretty closely with our front-line community providers to help them improve their skills based on what we do here at Riley.”

The Critical Care Department at Riley at IU Health treats children and adolescents with severe illnesses and injuries. 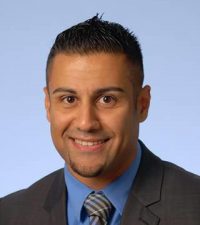