A freak injury paralyzed him, but there’s more to this teen’s story

Griffin Smith, a strapping 17-year-old athlete from Noblesville, suffered a rare spinal stroke that left him unable to feel his legs. After weeks of intense rehab, he is looking forward to going home and someday walking again.

Griffin Smith could be forgiven if he was mad at the world right now. He was supposed to start his senior year at Noblesville High School last week, and he was looking forward to seeing his friends again and gearing up for lacrosse season. 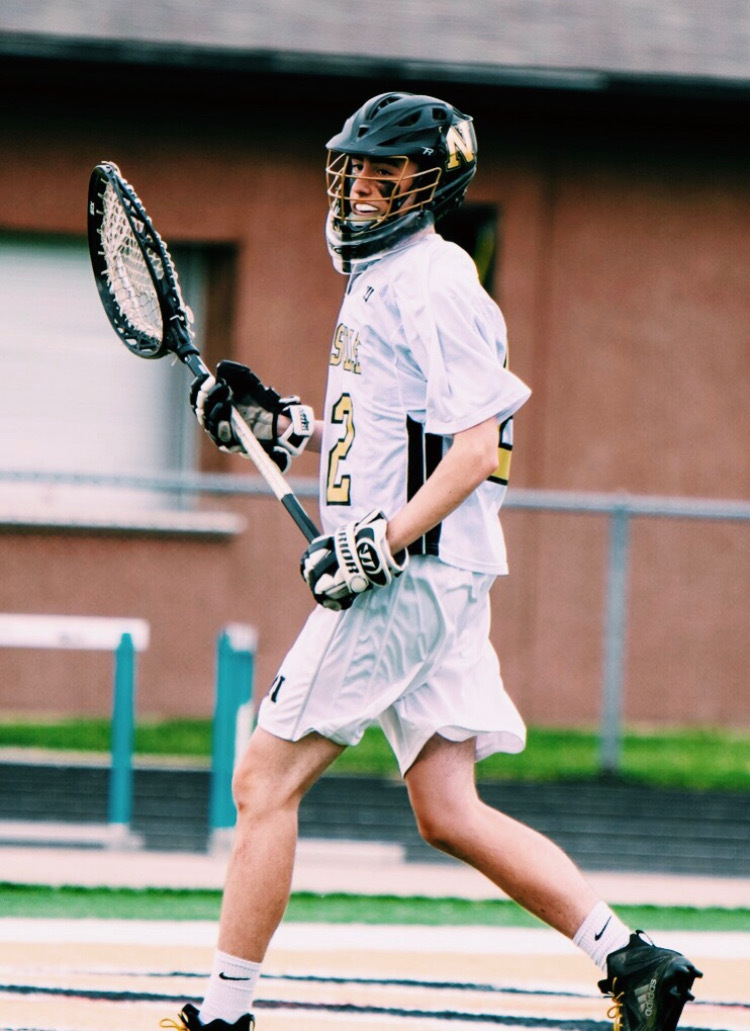 Those plans are on hold now, as the 17-year-old suffered a serious back injury while playing a game outdoors with his brother last month that left him unable to walk.

But Griffin is not the type of young man to get angry. He prefers to channel his energy into working hard to get better. It’s his strength and positive attitude that have seen his parents through the worst of this terrifying situation.

“Griffin has such great determination and such a good spirit that it makes it easier for us to get through this,” said his mom, Heather. “He’s been amazing.”

It was in the emergency department at an Anderson hospital that Griffin first realized the freak back injury he suffered might be worse than he and his parents originally thought.

Gradually, he began to lose feeling in his lower body. He turned to his mom and said, “I can’t move my legs.”

While she processed that realization, he went on to say – while sitting in the ED – “Maybe this is my path, this is the way it’s supposed to be,” Heather recalled. “And I thought, wow, how mature for a 17-year-old in that moment. I cried.”

Crying is something Griffin doesn’t have time for. He doesn’t like it when his dad, Greg, cries, which doesn’t happen very often. But these are unusual days.

Greg, who has coached his son in Little League since Griffin was in elementary school, gets emotional when he talks about the care that he and Heather’s oldest son has received at Riley Hospital for Children at IU Health, where Griffin was transported by ambulance July 18.

“Riley has done an amazing, amazing job to get him where he’s at,” Greg Smith said. “Miracles do happen here.”

It was at Riley where doctors confirmed that Griffin had suffered a rare spinal stroke, a disruption in the blood supply to the spinal cord. In most cases, the onset of a spinal stroke is preceded by sudden and severe neck or back pain. Griffin described it as “excruciating pain” in his back that moved into his stomach and chest and left him with a bad headache. Soon, he would be in the emergency room with no feeling in his legs at all.

Under the care of Riley neurologist Dr. Kelly Kremer, Griffin has progressed from no feeling to being able to wiggle both of his big toes and move both knees. Physical therapist Kristina Davey and occupational therapist Kelly Salter have worked the 6-foot 3-inch athlete hard – just the way he wants it. 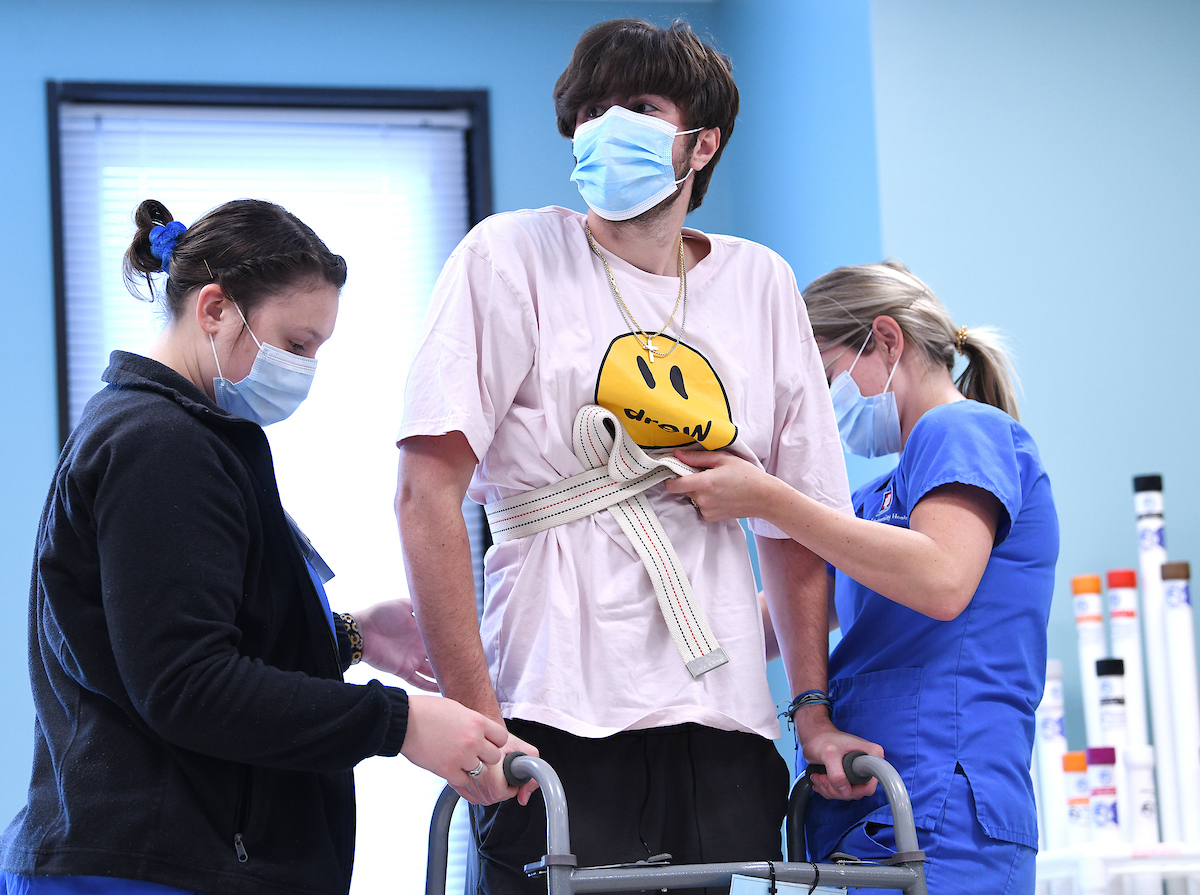 “They both love to push me. They know how to make me work hard enough to keep me going for the day,” said Griffin, who is exceedingly polite during the interview, answering questions with “yes ma’am” and “no ma’am.”

Dr. Kremer said spinal strokes account for just over 1% of stroke hospital admissions, and it’s even rarer in children. About 10-20% of patients report some improvement in motor skills over time.

Griffin is determined to be among that group, and his progress up to this point reflects that.

“He is ready to blow this Popsicle stand,” his dad said.

Indeed, Griffin is due to be discharged Friday after three weeks in Riley’s in-patient rehab unit, where he embraced the multiple therapy sessions required daily.

He is motivated not only to recover but to reunite with his family and friends. That’s been the hardest part of this ordeal, he said, not being able to see his younger brother, Gus, his grandparents and his bigger Noblesville family.

Gus turns 15 on Saturday, and Griffin was determined to be with his brother on his birthday.

To make it easier for Griffin to get around the family’s two-story home in his wheelchair, it will be remodeled, thanks to assistance from the Noblesville community. That community has walked with the Smith family throughout this journey, anticipating every need and lifting them in prayer.

“I’ve seen the power of prayer,” Heather said. “Through prayers, love and support, from our family to our extended Noblesville family, this kid has made great strides. He is a rare gem.” 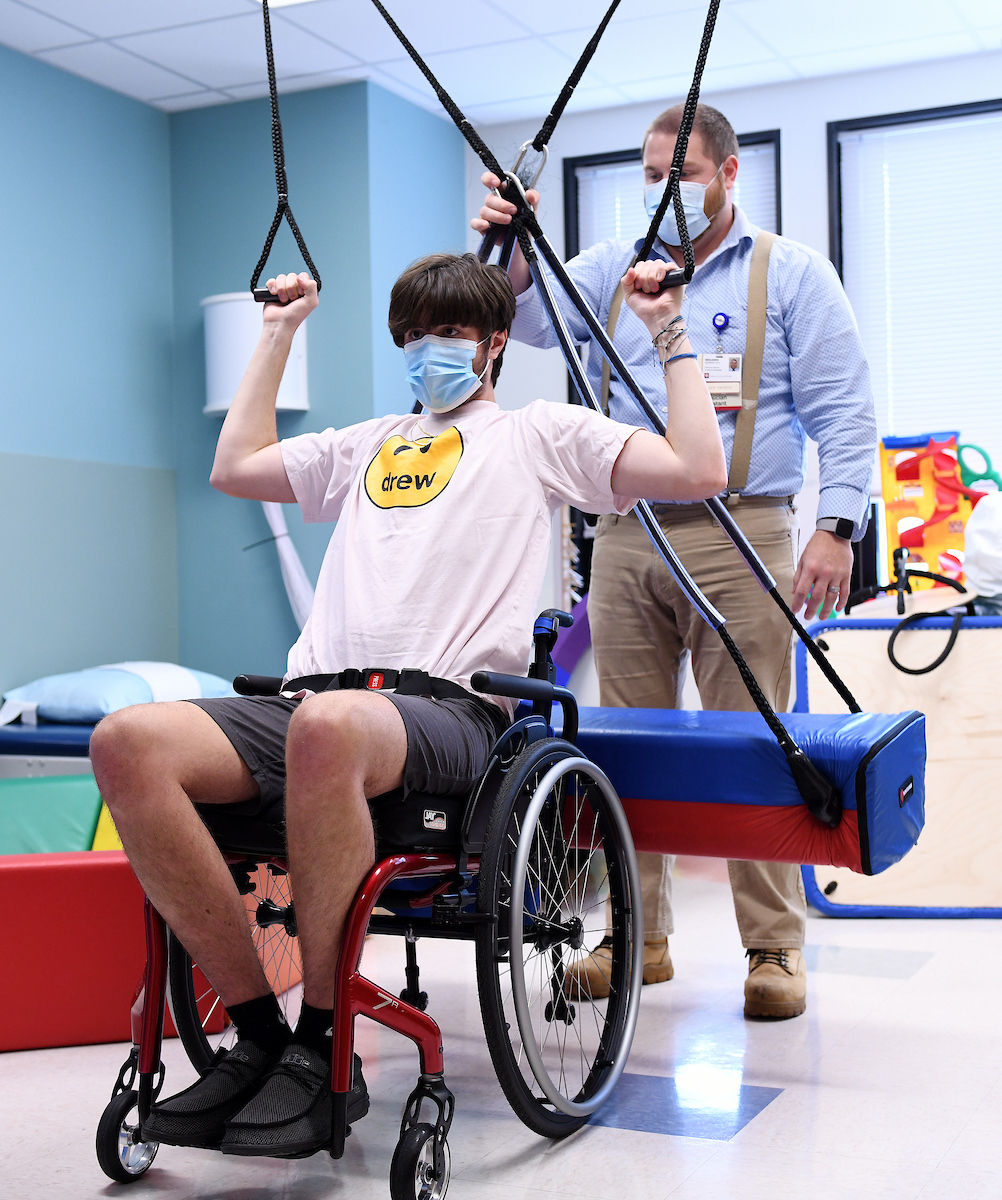 Griffin will do outpatient therapy and complete his first semester of senior year online, then hopes to be back at Noblesville for his last semester. After that, who knows?

“Right now my plans are up in the air,” he said. “I’m focused on getting better and graduating and walking again. I’ll figure out the rest once I start walking.”

His parents are understandably proud of their son’s grit during his rehab at Riley, but they are even more awed by his positive outlook.

“I’ve always thought that things happen for a reason,” Greg Smith said. “It’s how we deal with it, how we move forward, that matters. We’re still stressed out and we’re tired, because our family is not together, and we’re not home,” he said.

“But his attitude makes me feel better. It makes the whole family feel better. You can be ticked off at the world or not. He has chosen the high road.”