A Camp Where Scars, Catheters and Ostomy Bags Disappear

For the past 13 summers without fanfare or hype, dozens of kids – ages 8 to 18 – have come together for Kidney Camp. A place where they can truly fit in.

The scars on their bodies. Here, in this wooded place, they are OK. They might as well be invisible.

The ostomy bags and catheters, the blood pressure cuffs and even the dialysis machines, those are OK, too. They kind of disappear.

This is Kidney Camp, such a simple, unpretentious name. Such a beautiful name, really, when you find out what happens here.

For the past 13 summers, without fanfare or hype, dozens of kids – ages 8 to 18 – have converged on Camp Tecumseh in Brookston, Ind.

In all reality, it’s a secret club that, from the outside looking in, no kid really wants to be a part of: A camp for kids with kidney disease, kids with end stage kidney failure, kids who talk about catheters and dialysis as easily as video games and their favorite ice cream. 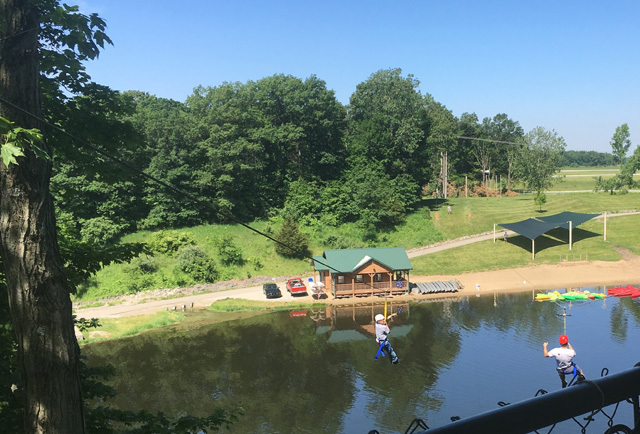 “This was scarier,” said Noah Mikel, 16, after zip lining Monday. “I was more scared for this.”

Zip lining is not. It was his first time. His heart was beating fast. It took him a while to get the courage to step off the ledge and soar over the lake. But when he did, he loved it.

“It felt like air was just going through me,” Noah said.

Monday was the final full day for Noah and 35 other kids at Kidney Camp. They wrapped up four days of horseback riding and swimming. Tennis and candle making.

They wrapped up four days of doing something they’ve rarely gotten to do before. Just be a kid at camp.

“These kids don’t qualify for any other camp because of their dialysis needs.  This is the only opportunity many of them have to go somewhere and stay overnight,” said Tricia Behringer, program director of the National Kidney Foundation of Indiana, which puts on the camp each year. “And certainly this is the only opportunity to meet people who share the same illness or issues as they do.”

And so this camp is put on each year in collaboration with a whole team of volunteers and medical professionals, many from the Riley Hospital for Children nephrology department. Lutheran Transplant Center in Fort Wayne, Manchester University and a host of individuals help out, too.

There are 30 volunteers who put on the camp. And for them, it’s pure joy. 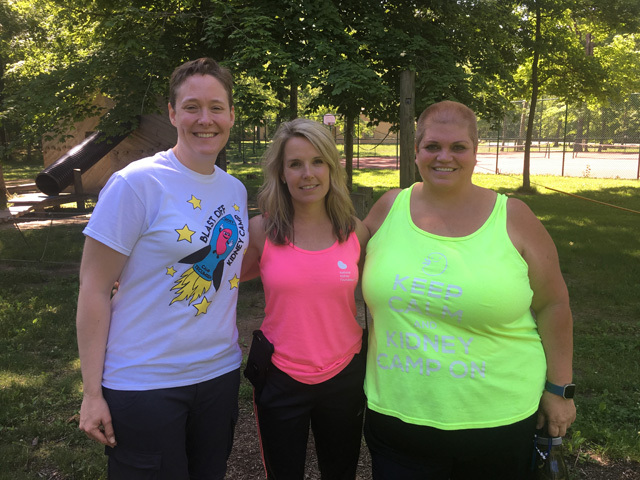 “Just to see these kids do things for the first time, that’s the reward,” said Suzie Hedrick, a co-founder of the camp, diehard and loyal camp volunteer and a registered nurse who works in dialysis at Riley. “They get to be around people who are just like them and do things they would never ever, ever get to do.”

For many children, kidney disease is a childhood sentence to feeling alone.

“Kidney disease is very isolating for children,” said Dr. Amy Wilson, a pediatric nephrologist at Riley and official Kidney Camp doctor. “Most of these kids do not have another kid in their school who has to ‘cath’ or has a kidney transplant or has ever needed dialysis.”

In fact, they most likely don’t have another kid in their school district or, statistically, their county, she said.

There 35 kids or fewer in Indiana at any given time who are on dialysis, Dr. Wilson said. And only 85 to 100 children under the age of 18 have had kidney transplants in the state.

“This is their opportunity to be together,” Dr. Wilson said. “And to finally feel…”

For the littler kids, it’s about meeting someone their own age who has an ostomy bag or a catheter.

Campers do dialysis right in their cabins. If someone is rolled over and their line is kinking, a fellow camper will let them know to roll off of it.

They remind each other it’s time to do a catheter. They bring blood pressure cuffs for campers not able to get out of bed so easily.

“They look out for each other,” Behringer said. “They do keep care of each other.”

And not just physically. For many kids, the camp is a psychological and emotional pillow. They can talk to one another about their fears, their insecurities.

One teenage camper said this is the only time of the year, at Kidney Camp, that she wears shorts and a T-shirt. She stays covered up in public otherwise.

One little girl took 15 pills with breakfast on Monday. And no one stared or asked questions. One little boy knew exactly how to do his ostomy bag and could be proud of it around his friends.

And at this swimming pool, kids are in swimsuits. No cover up. No embarrassment. No shame.

“And it may be the only time in their lives that they will ever do that,” said Dr. Wilson. “Here is a safe place for them.”

It was 13 years ago when Hedrick, Beth Johnston (a dialysis nurse practitioner at Riley and camp volunteer) and a former colleague of Behringer’s at the National Kidney Foundation came together with the idea for a Kidney Camp.

The first year, there were seven kids. It has grown to an average of about 40 campers each year. Any child in the state, ages 8 to 18, with kidney disease is welcome. 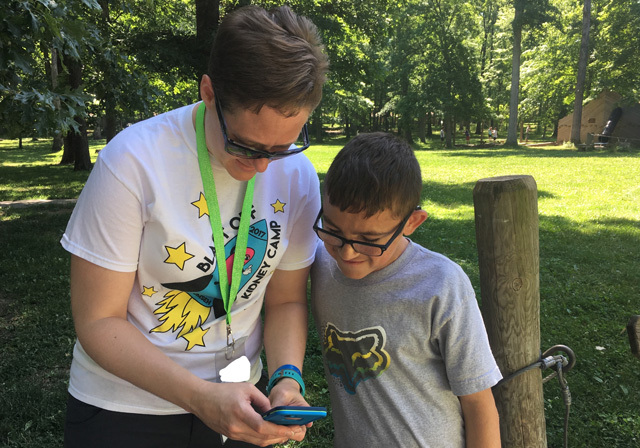 And once a child comes, they want to come back every year. It’s one of Dr. Wilson’s most-asked questions from her patients.

“When is camp? Who is going to be at camp? What’s the theme of camp? How long until camp?

It’s that big of a deal to these kids. And it’s that much fun. Take Hedrick’s bald head.

Almost every single year, Hedrick’s cabin – which is the older girls’ cabin – wins the clean cabin award. Sometimes the little girls might win it, but the boys? Never.

Well, on Saturday morning, Hedrick was told that the boys’ cabin, which is always a disaster, was “kind of military. They’ve got it looking good,” Behringer said.

No way, Hedrick said. Behringer asked if she’d like to challenge that. A deal was made. The counselor in whichever cabin lost the cleanliness award had to do whatever the other cabin told her to.

“So the challenge was on and we lost,” Hedrick said.

On Monday, Hedrick stood with a bald head. The boys’ cabin had been cleanest and those boys personally shaved her head.

Those boys, those kids, don’t get to do things like this much, the fun and camaraderie of a camp.

So when the bus heads home, Tuesday, tears are to be expected. The kids will ask if they can stay longer. If they have to go home.

“But they will make lifelong friends,” said Dr. Wilson. “Friends who understand.”