6-Yr-Old Cancer Patient: ‘I’ve Got Leukemia, But It’s The Kind You Want’

Anthony Keen has that thing doctors say you want if you have to fight cancer: A positive attitude. Anthony has it in spades.

Anthony Keen is putting together Legos in a T-shirt that says “Fight Like A Jedi” as he sits in that big chair -- chemo drugs pumping into his body.

He is talking about swimming. He’s ranking his three favorite WWE wrestlers – Brock Lesnar first, then John Cena and then The Rock.

He’s explaining how sometimes his favorite cheese pizza isn’t available. So, he’ll just pull off the toppings, the pepperoni or the sausage or the mushrooms, and make his own cheese pizza.

Anthony is 6. He has acute lymphoblastic leukemia. He tells people, “I’ve got leukemia, but it’s the kind you want if you’re going to get it.”

You see, Anthony has that thing doctors say you want if you have to fight cancer: A positive attitude. Anthony has it in spades.

His head is full of brown, soft curls now. But for the nine months his head was bare, if a kid said he was bald, Anthony would say, “Well, I have cancer.” And then he’d go play with them. 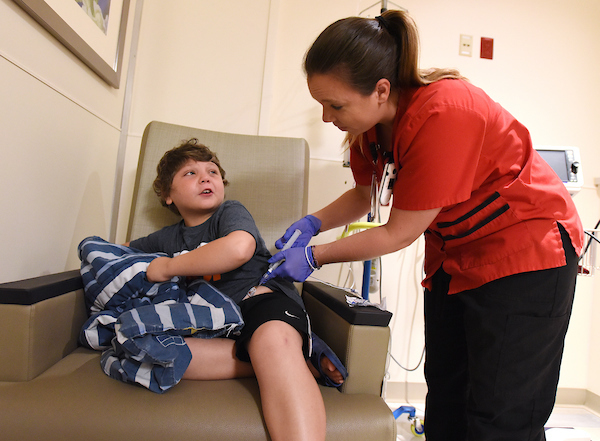 It’s a medical journey no 6-year-old wants to go through. But Anthony doesn’t seem to see it that way.

As his mom, Emily Schlund, told the dire story Thursday morning -- inside Riley Hospital for Children at IU Health -- of the days leading up to his diagnosis, how he could barely walk, Anthony interjected.

“But now I’m better at running,” Anthony says. “So this Easter egg hunt, I’m going to get more than three eggs.”

Three eggs. An Easter egg hunt. That is where this whole cancer ordeal began.

It was a Saturday, the Saturday before Easter last year, and there was an egg hunt.

Anthony went to that hunt, but he was so tired and weak he could barely walk. His dad, Jerry Schlund, had to carry him around to the eggs.

“We knew something was definitely wrong,” Emily says, “but still had no idea what.”

That was just days before his diagnosis.

But earlier, there had been more subtle signs. Anthony’s preschool teacher had told Emily her son was acting different. When she took him to school one day, she noticed it, too. Anthony couldn’t get up and down the stairs like he usually did. 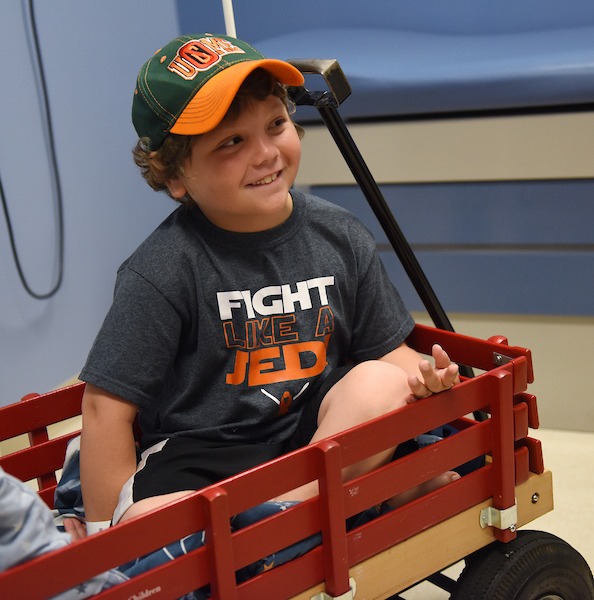 “He let everybody go ahead of him, which was unusual,” she says. “He was usually like, ‘zoom.’”

Anthony was bending down and using his hands to help push himself up the stairs. He was limping.

“I told the doctor, ‘What is going on?’” Emily says. “I said, ‘Can we do something? Can we do a test? Do an MRI? There is something wrong with him.”

The Friday before that egg hunt, Emily had taken Anthony to the doctor. There had been tests and blood work.

His platelets were very low; Anthony was scheduled to see an oncologist on Monday.

Emily will never forget that Monday night. She was sitting in the library when her phone rang. The oncologist had looked at the results of more tests.

Anthony would need to go to Riley. It looked like he had leukemia.

“After I heard leukemia, I lost it,” says Emily. “I didn’t hear anything else.”

The next morning, as they prepared to leave for Riley, Jerry packed a bag with clothes and things they all would need for the next few days.

At that point, Emily still was having a hard time accepting Anthony had leukemia.

“I couldn't understand why my husband was packing a bag,” Emily says. “We weren't going to be there long. I still thought it was a virus and they would send us home.”

Once at Riley, doctors told Emily “we saw the leukemia bursting in the blood.” It was March 29, 2016. 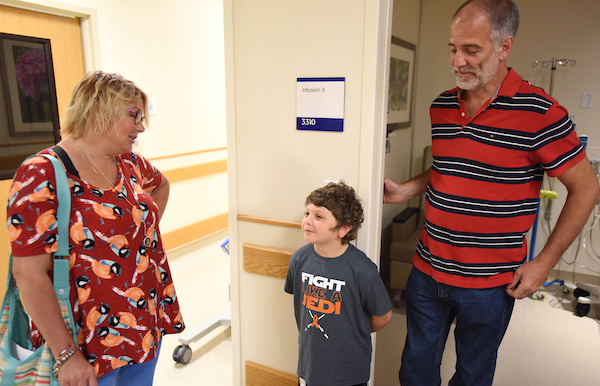 The family would need that bag Jerry had packed. Anthony wasn’t sent home from Riley. He was admitted and started chemo.

At first, Anthony was timid at Riley. He didn’t like all the attention from the doctors and nurses. He wore his Kylo Ren mask in the hospital bed as a way to “hide.”

But then, he started getting more comfortable.

One night, he yelled for the doctor. He wanted the number for Little Caesars pizza. He wanted a cheese pizza. When his mom told him that wasn’t the doctor’s job, Anthony yelled out for the nurse.

Anthony and his positive attitude became well known all throughout Riley, but especially on the oncology floor. He would make “rounds,” stopping in front of each room and standing there until the patient in the bed looked at him.

Then, he would wave. And move on to the next room. He made the rounds every day. Spreading his cheer.

In January, almost 10 months after his diagnosis, Anthony went on maintenance treatments for his leukemia. He comes to Riley every month for chemotherapy. He will do that for two more years.

In the meantime, he gets to do all the things he loves. Play video games – WWE, of course. Make piles of stuffed animals in his living room – more than 200 were sent to him after his diagnosis. 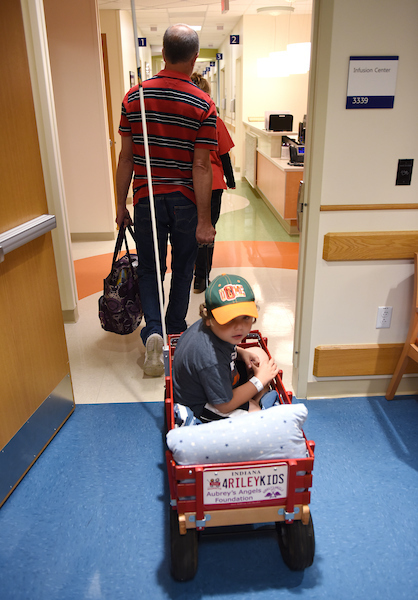 And he is ready to head to first grade at Central Lutheran School in New Haven.

All the while, he is waiting for his dream – of meeting one of those top three wrestlers.

He’s never been to a WWE event, but Anthony says, “I want to very badly.” He wants to meet his favorite wrestlers very badly, too.

Anthony doesn’t know it, but his dad is taking him to the WWE Live Summerslam Heatwave Tour in Fort Wayne at the end of the month. Anthony deserves that wonderful surprise. He’s been through a lot, at such a young age.

And that, doctors say, will take Anthony a long, long way.

Rachel Houser, 15, visited her pediatrician for what she thought was a routine physical. The exam may have saved her life. When a lump was discovered on her neck, Houser underwent an ultrasound that detected thyroid cancer. After two surgeries at Riley Hospital for Children at IU Health and radioactive iodine treatments, Houser is now cancer free.

The family never could have imagined a year ago as the season started that it would be Conner West’s last time playing football at Huntington North.