The call could come any day. And when it does, GG will head to Riley Hospital for Children for a transplant surgery that will change her world.

The good days are spent at a hotel. G’Liyah (GG) Clark scurrying in the hallway, playing Mother Goose Club games on her iPad.

GG bouncing down the steps outside, pulling a tiny red wagon behind her. Swinging in the park just next door to the hotel. Belting out the song “Let It Go” from her favorite movie “Frozen.” 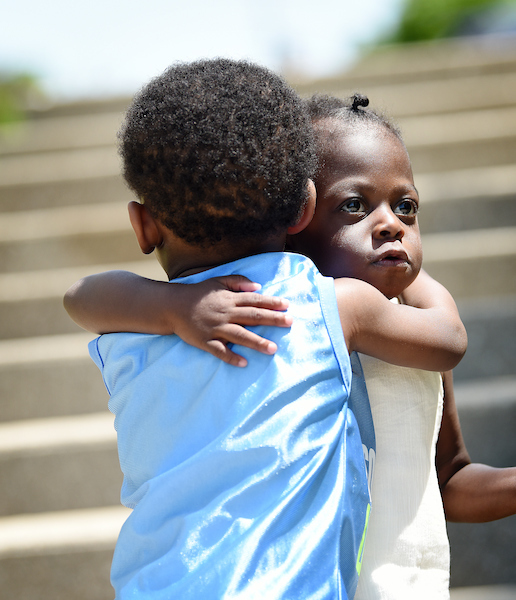 The good days for GG are fabulous.

But no matter how fabulous they are, they don’t make up for the bad days -- because those days are devastating.

The bad days are spent in the hospital, GG battling infections and critically ill. GG fighting like the tiny trooper she is just to stay alive.

GG pulling through even when doctors don’t think she will.

It was a good day, a great day, on Monday for GG. She is at that hotel waiting on surgery, pulling her wagon in the bright sunshine. She’s had plenty of surgeries already in her three years of life, back home in Texas.

But this surgery is the big one – a multivisceral transplant. GG will get a new stomach, liver, pancreas and intestine. This surgery will change GG’s whole world.

Her mom, Shakayla Clayton, moved GG and her brother, 1-year-old Gregory, along with aunt Ebony Clayton, to Indianapolis in December. She was told by her doctor in Texas that Riley Hospital for Children is where GG should be.

When she arrived, GG was put on the transplant waiting list. And so, each day, Clayton waits for a phone call -- that multiple organs have been found to match GG’s tiny body.

“It could come any moment,” Clayton said. And it will be scary and wonderful all at the same time. “Overall, though, I’m ready for it. Just so she can be cord free.” 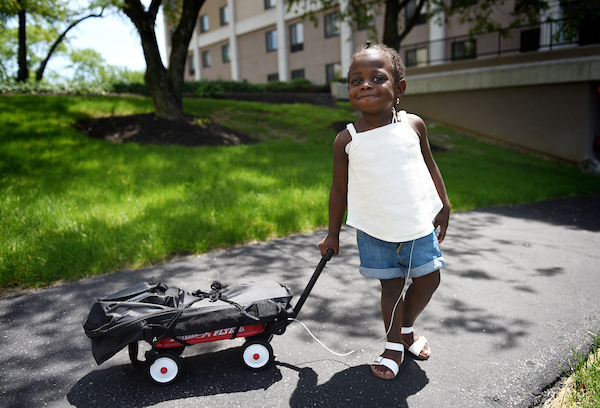 The cord is always there with GG. That tiny red wagon she pulls behind her is deceiving. It’s not just for fun. She has to have it with her at all times.

In that wagon is a black bag. GG uses an IV to get nutrition and fluids. That cord inserted into her body is connected to the bag, which carries her nutrition.

GG doesn’t get to eat the things 3-year-olds usually love to eat. No ice cream or French fries. No chicken nuggets or fruit snacks.

She doesn’t wear diapers or go to the bathroom like most little girls. GG has an ostomy bag.

Clayton is ready for all the moments she and GG should get to experience as a mom and daughter -- running free with no tubes, potty training and eating together.

This transplant surgery is the answer to making all of that happen.

“She will be free to run and play and travel without the constant need for IV access and fluid bags,” said GG’s surgeon, Richard S. Mangus, director of intestine transplantation and pediatric liver transplantation at Indiana University Health. “This transplant will free her to be a normal kid.”

GG burst into the world at 26 weeks, weighing 1 pound, 2 ounces. She was Clayton’s first baby. When she saw her daughter for the first time, she had to leave the room.

“I was hoping for a healthy baby,” said Clayton, 26. “She was so small and had transparent skin.”

She couldn’t bear to see her tiny daughter so sickly. But Clayton quickly adapted. She knew GG needed her.

GG spent four months in the neonatal intensive care unit at a hospital in Texas. Clayton lived 30 minutes from that hospital. Every day, after work, she drove to be with GG.

“I had to see my baby girl,” Clayton said.

Clayton knew before GG was born that there were problems. When she went in for the ultrasound to find the gender of her baby, Clayton was told GG had the condition gastroschisis.

An opening had formed in GG’s abdominal wall and her bowel had pushed through the hole. It was now on the outside of GG’s body in the amniotic fluid.

A couple weeks after that appointment, Clayton was put on bed rest. Days later, GG was born.

Doctors say GG’s success is due, largely in part, to the amazing care Clayton has given her. It all could have been overwhelming for a first-time mom, but Clayton buckled down and fought.

No surprise, then, that GG has that exact same fighting spirit.

GG has lived her entire life without a functional intestine.

“This means that she has never been able to eat or drink like the rest of us,” Dr. Mangus said. “She is fed into her veins with a mixture of nutrients and fluids that keep her alive.”

Over time, those feedings can take a toll on the body. Development of blood clots in the veins and damage to the liver can occur. Blood stream infections are also common, Dr. Mangus said.

GG has found herself hospitalized at Riley several times since coming to Indianapolis. Dr. Mangus said she amazes everyone who sees her.

“GG is a real fighter. She has been critically ill on multiple occasions throughout her short life and she always bounces back,” he said. “I have had other doctors express concern when she is so sick that maybe she won't make. GG fights through it every time.”

And along the way, GG has become a celebrity, of sorts, at Riley.

“We’ll walk through the hospital to get weekly labs and people come up to us calling her by name,” Clayton said. “They know that she is GG.”

It’s hard not to remember GG once you meet her. She’s definitely stolen the hearts of her medical team.

“She loves to interact with the nurses and brightens everyone's day,” said Dr. Mangus. “When she is well, she is so pleasant and has a beautiful smile.”