16-Yr-Old Dropped Dead On Basketball Court, Then He Fought Back To Life

His heart was shocked and Zack Clinton came back to life. But no one knew. No one knew if he would ever really have his life back again.

The day had been a dismal blur for Rae Jean Clinton. It was one of those days where dread hung over -- and she couldn’t quite put her finger on why.

As she sat on the couch in her Richmond, Ind., home that December afternoon, the answer came to her. It came to her in a terrifying phone call.

Panic was on the other end.

Zack’s on the floor. We can’t get him to breathe. He’s foaming at the mouth. They’re getting ready to shock him.

By the time Rae Jean got to Earlham College, where Zack had been playing, there were kids scattered outside around the school – sobbing, shrieking, crying.

She ran inside and saw Zack lying on the floor. His eyes were closed. There was no life in him. His shirt was ripped off. They had already shocked him once; he’d come back to life for five minutes.

And then, he died again.

“Dead. No vital signs, no nothing,” Rae Jean said.

As paramedics got ready to shock him again, Leo Clinton stayed with his son, begging him to come back to life. Rae Jean took off running to a quiet room to pray.

Minutes later, Zack started breathing. Life was in him. But no one knew. No one knew if he would ever really have his life back again. 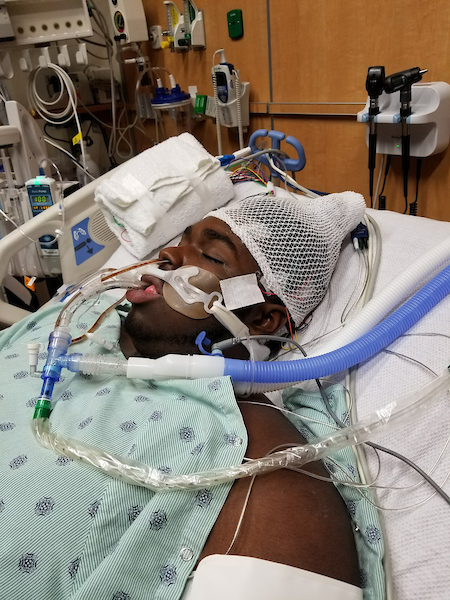 For 21 days, Zack laid in a coma at Riley Hospital for Children at IU Health. No response. No movement. When his family tried to get him to squeeze their fingers, his hand lay limp.

It was a stark contrast to who Zack had been. He seemed a shell of the teen he once was. Zack was a class clown, an ornery kid. He was a wicked football player, both offense and defense. He was a basketball player.

He was a kid who, at age 13, started a garage church in the neighborhood, preaching to the children.

A video of Zack as a teen pastor, in a robe, waving a handkerchief, preaching the gospel, gave his parents some comfort during those long days and nights at Riley. Both Leo and Rae Jean are pastors at Life Changing Ministries Worship Center in Richmond.

But Zack had gotten himself in trouble of late. That’s what made what happened to him even harder on his mom.

“We were on the outs,” she says, “because he was taking a different path.”

And it seemed like that would be how Zack would always be remembered. It seemed he wouldn’t have a chance to ever prove himself again.

Chuck Dietzen, M.D., medical director of pediatric rehabilitation at Riley, had to have a tough conversation with the Clintons. He had to tell them how this injury may have affected Zack’s brain.

“You get lack of blood flow and blood pressure carrying nutrients and oxygen to the brain, you can have very, very bad outcomes,” Dr. Dietzen says. “In fact, typically, it is a very darn bad outcome, which was what mom was preparing for.”

After 21 days, Rae Jean was called into a care meeting. She was told she needed to prepare to put Zack in a nursing home. There had been no progression, not even a twitch from Zack.

“And I just told them that is not what God said to me concerning my child,” Rae Jean says. “I don’t know when God’s going to do it, but I believe he’s going to do it. I don’t have anything but time.”

Zack suffered from cardiomyopathy, an enlargement of the heart muscle, and an irregular heart rate. 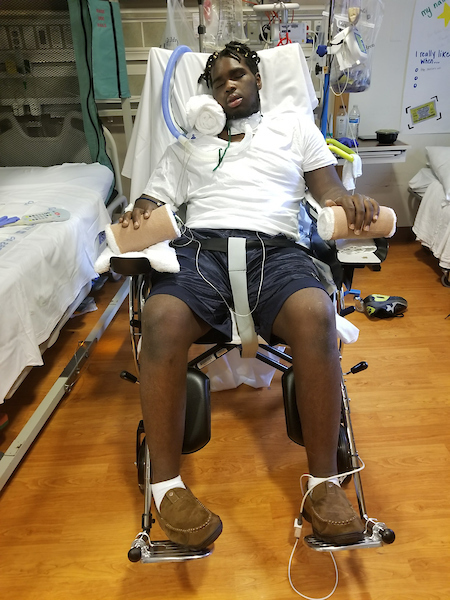 “That’s pretty typical,” says Dr. Dietzen. “And then all of a sudden, they just drop dead.”

Essentially, what happened on the court that December day was a dysrhythmia or arrhythmia, a problem with the electrical system of Zack’s heart that caused sudden cardiac arrest. It’s a condition that is more common in African American males, Dr. Dietzen says.

There has been debate for years on whether high school athletes should be getting the same heart scans and testing that NFL players receive.

“Most athletes, as you move the stethoscope around, because of the sport and their level of activity, they may have an enlarged heart,” Dr. Dietzen says. “Would an EKG really help? Do you do an echocardiogram? How do you select who would have them? Those are all questions that need answered. And they are important questions.”

Perhaps Zack didn’t like the idea of a nursing home. Because 20 minutes after that meeting on Jan. 15 where Rae Jean had learned her son might never function on his own again, Zack started responding.

Less than 10 minutes later, Zack started squeezing his family’s hands. His eyes popped open and he started to look around.  When asked by a doctor to turn to his left and look at his sister, Zack followed the command.

“That was the first time I was really sure in my spirit,” Rae Jean says, “he was going to be OK.”

Show one finger. Hold up two fingers. Zack did it again and again. Then, he started putting two, three and four steps together.

He started walking and talking. On Feb. 20, he celebrated his 17th birthday with a party at Riley.

“Boy, he has come a long, long way,” said Dr. Dietzen, as he stood inside Zack’s room this week. “Mom is getting the miracle she prayed for.”

Zack is listening intently as Dr. Dietzen and his mom recall his story.

The first thing Zack remembers, he says is “waking up right here.” He points to the bed.

“That’s all I remember. Mom told me (what happened). Scary,” he says. “They told me. They told me I died twice.”

He doesn’t remember the incident on the court that day in December. But he remembers everything before. And he is making great strides in moving forward to the future.

Just a week ago, he had a cap put on his trach. He can talk now and eat some thickened foods. Dr. Dietzen made sure Zack got his beloved banana pudding the first day he could.

Zack goes through rehab every day except Sundays. This week, in his occupational therapy session, he shot basketball, then he was asked by his therapist Whitney Kozlowski to play a game. 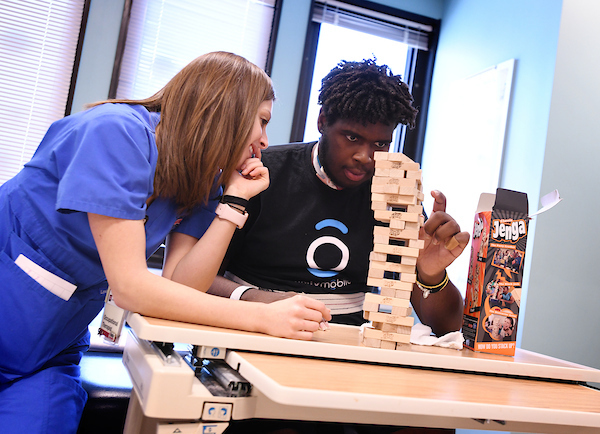 “No, boring,” Zack says with a smile. What about Jenga? He agrees.

His hands are shaking, but he manages to pull blocks out and insert them into open spaces without knocking the tower down. It’s a chore, but one Zack won’t give up on.

“I’ve got to start making things harder,” Kozlowski tells him, “because you are doing so good.”

Zack is washing himself on his own. He is getting ready to start some cooking, perhaps grilled cheese or some mini Velveeta cups of microwave mac-n-cheese.

As he leaves his session, Kozlowski gives him a clump of gel with 10 beads embedded inside. She tells him to start stretching it and pulling it and taking the beads out.

His next stop is Sarah Sternasty, a speech language pathologist at Riley, who marvels at Zack’s progress.

“Oh my gosh, it’s incredible,” she says. When she first met Zack, he was trying to roll over on his stomach. He couldn’t. He wasn’t responding to Sternasty at all.

And now, he has just walked into her office on his own for their appointment.

Sternasty’s job is to help him with swallowing. This day there is pudding and thickened juice. She is also there to help him get his voice back, strong and unslurred.

“Nice job. Perfect,” Sternasty says to Zack. “Now, they get a little harder.”

Falsehood. There is a long pause. Zack looks at everyone in the room for help. Nothing.

“It’s fun to see his personality come out,” she says. He makes everyone at Riley laugh, all the time.

One of his favorite jokes is to tell people how great it’s been having pretty women care for him one on one.

“I ain’t complaining,” he says.

But, of course, Zack does want to get out of Riley. That is his No. 1 goal.

This Tuesday is the big day -- March 6. After two and a half months fighting back to life at Riley, Zack is scheduled to go home. 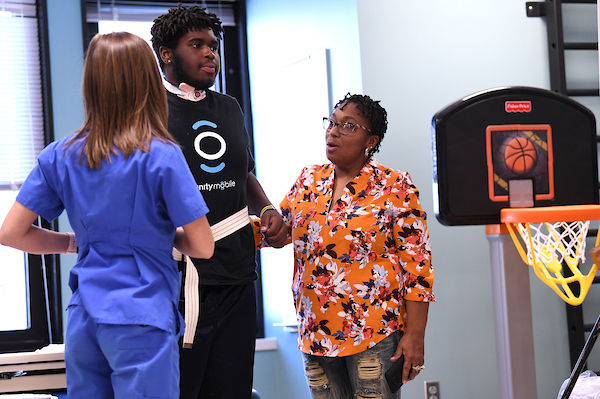 He is thrilled about that. He wants a haircut. He has been craving lobster, Sonic and Taco Bell.

He will go home to Richmond with a defibrillator vest, as a temporary precaution for his condition.

Doctors are talking to Zack about implanting a defibrillator or having him get an AED machine.

“I left that decision up to him. It’s going to be his life,” says Rae Jean. “We’ll try the vest for two months, but he will be the one living with that decision.”

At home, Rae Jean and Zack are going to finish a book about the family’s journey, titled: “Finding Our Way Back to the Father: God, Family and Ministry.”

Dr. Dietzen will be mentoring Zack and plans to have the teen do some motivational speaking.

In the meantime, Zack is hoping his story inspires others. And it wouldn’t hurt if it caught the attention of the Pittsburgh Steelers, maybe wide receiver Antonio Brown, or the Los Angeles Lakers, perhaps Kobe Bryant, he says. He’d love to meet them.

But Rae Jean says her son already has met his heroes – right inside Riley.

“They are the people that were planted here around him,” she says. “They pushed him. They didn’t let him give up.”